So this is finally happening. The result of much work all through the stack from several dedicated individuals (You know who you are!) started lining up during the past few months and now is hitting master. Early in the cycle I blogged about stylus support being merged, based on the first version of the tablet protocols. Now I have the pleasure to declare GTK+ tablet support on Wayland feature complete.

As predicted in the earlier post, a second version of the protocol came through, bringing pad support for clients. What is a pad? It’s the set of buttons and other (often) tactile sensors that tablets have around the stylus-sensitive area. These devices are rather uncanny from an input management perspective: unlike mice/keyboard, those buttons/sensors don’t have an associated action that has been chiseled on the key or through decades of user interaction paradigms, they are rather meant to be user-mappable. Also, despite buttons being buttons and sensors being essentially one-dimensional axes, all resemblance with a mouse/stylus is purely coincidental, focus management is more similar to keyboards (actually, the same), and is not directly related to the stylus.

In GNOME, this action-mapping has been traditionally done in gnome-settings-daemon. X11 clients have been usually completely unaware of pad events, partly because of the oddities pointed out above. So g-s-d kept a passive grab on pad buttons and would translate those into keycombos. This has many shortcomings though, keycombos are far from standard, accelerators are translatable, … For Wayland, we have the opportunity to fix all these shortcomings, and make pads a first class citizen.

So the right thing to do here, if we want to univocally map actions to pad features, is delegating the action mapping to the client. The other side of the coin is providing proper feedback about the actions. In GNOME we have session-wide OSDs to display the pad mapping, and the wayland protocol has been tailored to cover an usecase like this, so applications can directly participate in filling in this info, this is how the end result looks: 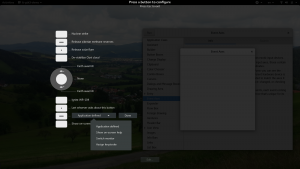 * Note to supervillains: Actions are stubs

There’s also changes scheduled (I know I’m late, who doesn’t like pressure!) to gnome-control-center to centralize the management of styli for all known/plugged tablets, following the very nice mockups from Jimmac.

How is this exposed in GTK+?

gtk+ master introduced GtkPadController, it’s a GdkEventController subclass that will manage pad events, from one pad specifically, or for all at once. The controller takes a GActionGroup and a set of pad action entries, each defining an action name to activate, a simple example:

And pressing that button on that pad will trigger the related action from the GActionGroup. The given label is what you end up seeing in the OSD. I expect this object to be eventually made useful on other platforms than Wayland (X11 is the first objective), although only the event-to-action mapping, and not entirely exempt of platform-specific issues.

This is going to be messy! why does every app need configuring? Why not a global action map?

The Wayland protocol aims to be intemporal, the trouble would only begin at defining a good enough initial set of global actions, and still not all actions might make sense for every app. This allows every application to implement pad actions, no matter how high or low level they are. Configurability is also optional, although the first apps that will surely come to your head will implement some, they already did for styli and other input features.

Is this for me?

Depends :), if you see your app might be involved in artists or designers’ workflow, it well could. Providing a sensible minimal set of actions to perform, even if hardcoded (think those you’d like shortcuts for, and were away from the keyboard), could help lots in integrating this previously neglected device, to the point that it might feel widely useful besides the niche drawing application case. By using GAction underneath, there’s also little left for you to test, you just need to ensure the action performs the intended effect when activated.