The ability to restrict firmware to specific versions of fwupd and the existing firmware version was added to fwupd in version 0.8.0. This functionality was added so that you could prevent the firmware being deployed if the upgrade was going to fail, either because:

The former is solved by updating fwupd, the latter is solved by following the vendor procedure to manually flash the hardware, e.g. using a DediProg to flash the EEPROM directly. Requiring a specific fwupd version is used by the Logitech Unifying receiver update for example, and requiring a previous minimum firmware version is used by one (soon to be two…) laptop OEMs at the moment.

Although fwupd 0.8.0 was released over a year ago it seems people are still downloading firmware with older fwupd versions. 98% of the downloads from the LVFS are initiated from gnome-software, and 2% of people using the fwupdmgr command line or downloading the .cab file from the LVFS using a browser manually. 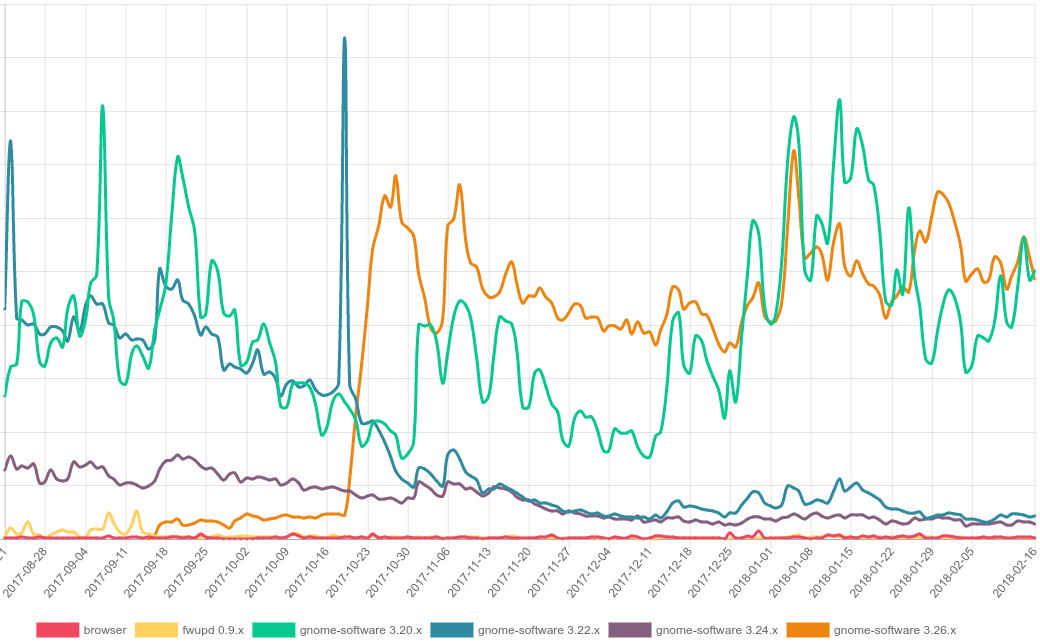 Detecting the fwupd version also gets slightly more complicated, as the user agent only gives us the ‘client version’ rather than the ‘fwupd version’ in most software. This means we have to use the minimum fwupd version required by the client when choosing if it is safe to provide the file. GNOME Software version 3.26.0 was the first version to depend on fwupd ≥ 0.8.0 and so anything newer than that would be safe. This gives a slight problem, as Ubuntu will be shipping an old gnome-software 3.20.x and a new-enough fwupd 0.8.x and so will be blacklisted for any firmware that requires a specific fwupd version. Which includes the Logitech security update…

The user agent we get from gnome-software is gnome-software/3.20.1 and so we can’t do anything very clever. I’m obviously erring on not bricking a tiny amount of laptop hardware rather than making a lot of Logitech hardware secure on Ubuntu 16.04, given the next LTS 18.04 is out on April 26th anyway. This means people might start getting a detected fwupd version too old message on the console if they try updating using 16.04.

A workaround for xenial users might be if someone at Canonical could include this patch that changes the user agent in gnome-software package to be gnome-software/3.20.1 fwupd/0.8.3 and I can add a workaround in the LVFS download code to parse that. Comments welcome.