Linux has traditionally shown the user packages to update and install, which is great for administrators, but sucks for end users. How many times have you been prompted with an update list that asks you to decide whether to update something you have no idea about? 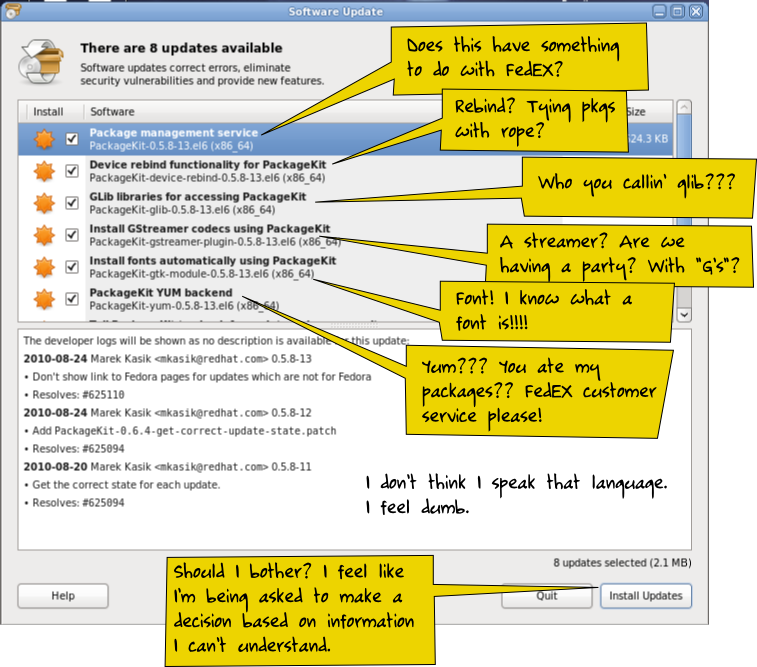 Mo illustrated a few days ago about how confusing the updater is and I agree with her; and it’s mostly my fault for not pushing applications harder. Lists of unlocalized generic packages are so 1990’s, and compared with the Ubuntu Software Center or the Android App-store we look like amateurs.

So, a solution. I’ve been working on app-install with some people from other distros for the last few months, and last week it had it’s first public release. Schema version 2 is already being worked on, and now optionally integrates with PackageKit and also provides some other features like sorting applications by rating and application screenshots. I’ve already generated distro metadata for the entire fedora repository (this takes about four hours on my laptop) and packages are available. It’s really easy to generate metadata for the other repos too, but I digress. Read the README file for all the guts about how it works.

I’ve got two demo applications that use the app-install data. One is an installer and one is an updater. These are work in progress, and show dramatically the lack of my UI design skills.

The installer will be an additional tool (much like the ubuntu-application-installer compliments synaptic) which is focused on ordinary desktop users. If you know what an epoch is, it’s probably not for you. The old tool will remain, so panic not. This tool will just install applications, that-is anything that ships a desktop file with an icon. Anything else just isn’t shown. Sorry! We will hopefully show groups too, perhaps even the same entries as the “Applications” menu.

The updater will be an improved version of the old package updater, and anything that’s not an application (e.g. PackageKit-libs-devel) will be under a group (not shown in the screenshot) called “System infrastructure“. If you update an application that depends on a package from the “System infrastructure” group then it gets pulled in as a dep. Otherwise you only update the system stuff (e.g. systemd, dbus, kernel) if you choose to select the “System infrastructure” metagroup. Of course, you can descend and pick updates in that group individually like before, if you know what you are doing, but I think most people will just install the metagroup as one lump.

Also, bear in mind that neither app-install or the application data packages are in distros just yet. This stuff isn’t well tested. The packages may steal all your magazines from your bathroom.

Now, I mentioned my ineptitude at designing GUIs. This is where you come in. I would love you add mockups of what you think an application installer or application updater should look like to this page. I’m going to ask Máirín (mizmo on IRC) to help with the design work, so please upload mockups I can share with her and the other design people. Thanks!

15 thoughts on “Linux and application installing”