Usually near the end of the process of getting a vendor on the LVFS I normally ask them to send me hardware for the tests. Once we’ve got a pretty good idea that the hardware update process is going to work with fwupd (i.e. they’re not insisting on some static linked ELF to be run…) and when they’ve got legal approval to upload the firmware to the LVFS (without an eyewateringly long EULA) we start thinking about how to test the hardware. Once we say “Product Foo from Vendor Bar is supported in Linux” we better make damn sure it doesn’t regress when something in the kernel changes or when someone refactors a plugin to support a different variant of a protocol. 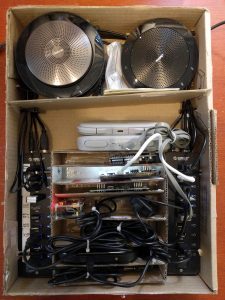 To make this task a little more manageable, we have a little python script that helps automate the devices that can be persuaded to enter DFU mode themselves. To avoid chaos, I also have a little cardboard tray under a little HP Microserver with two 10-port USB hubs with everything organised. Who knew paper-craft would be such an important skill at Red Hat…

As the astute might notice, much of the hardware is a bare PCB. I don’t actually need the complete device for testing, and much of the donated hardware is actually a user return or with a cosmetic defect, or even just a pre-release PCB without the actual hardware attached. This is fine, and actually preferable to the entire device – I only have a small office!

As much of the hardware needs special handling to put it in update mode we can’t 100% automate this task, and sometimes it really is just me sitting in front of the laptop pressing and holding buttons for 30 minutes before uploading a tarball, but it’s sure it comforting to know that firmware updates are tested like this. As usual, thanks should be directed to Red Hat for letting me work on this kind of stuff, they really are a marvelous company to work for.