It’s time for another GNOME Crosswords release! This time we had a focus on I18N support. I also got patches from another new contributor – Philip – who added some nice improvements, dutch-language support, and a downloader.

Amazingly enough, it turns out that Dutch crosswords allow an ‘IJ’ digraph in the same cell. This is an interesting twist on the crossword, as you can add an ‘I’ and ‘J’ character independently, as well as together.

To support this, I added a Quirks object that can be used to modify the behavior of the game. Beyond Dutch support, I started adding support for rebus-style crosswords as a second quirk. I imagine having to add more as we add additional language support.

Fortunately, we already supported strings within answers so this wasn’t too hard to implement. However, I’m not 100% sure I got the input controls correct. If you’re a Dutch crossword solver, I’d love to hear from you. I also hooked up the quirks to the help overlay so it only shows the special input mode when you have a puzzle that needs it (or are running it in Dutch). 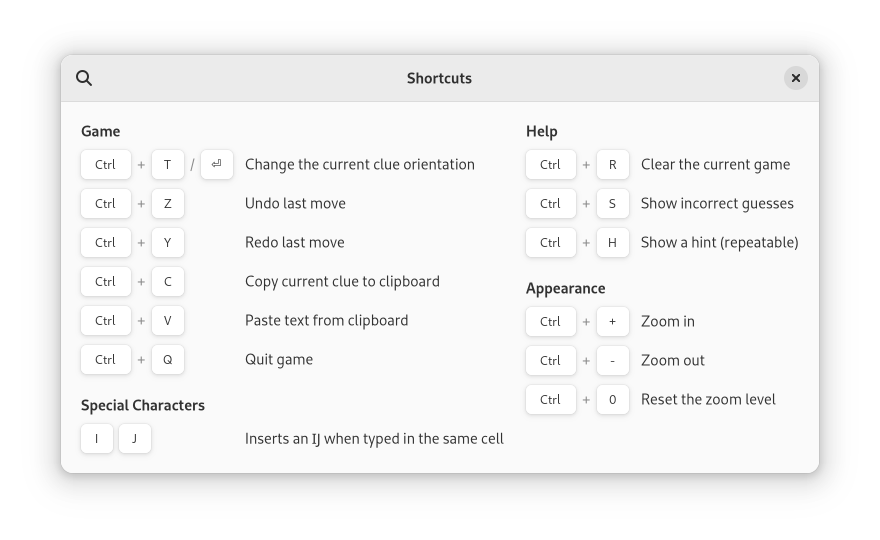 I also added another extension to the .ipuz implementation to specify the locale of puzzles. We use that to filter puzzles, and add the quirks.

I thought I’d write down the things that I got stuck on this cycle in the hopes it saves other people time in the future:

GtkImage has the really convenient ability to recolor images when the appearance changes from light to dark. As far as I can tell, that functionality isn’t exported, so to use it you have to load the svg as a symbolic icon. Despite the documentation, it’s pretty finicky to get that correct so make sure to read all the documentation carefully. In addition, GtkImage really wants the image to be icon sized. You can override that with gtk_image_set_pixel_size().

We use keyfiles (aka, .desktop files) as a config file format to define the puzzle sets. These config files have user-visible strings added to them them, and then are compiled into a gresource file. This was surprisingly hard to get translated. Some notes: