Last time we left on the general API design. Since then I’ve been refactoring the existing animation-related code so we can reuse it for our public API. Part of that refactoring has been converting the current boxed-type adwaita animation code into a gobject class. I’ve learned a lot of how GObject works under the hood by doing so, so I expect to be a lot quicker implementing the next milestones.

After that work, which is already merged, I started working on timed animations, and moving functionality from the baseclass “adw-animation” into it, as well as starting opening the API (which was completely private until now).

I quickly prototyped a demo page for said timed animations (which is highly WIP, from design to phrasing): 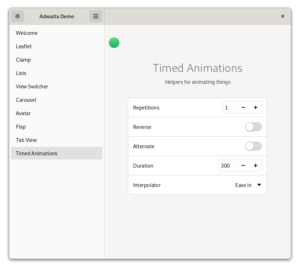