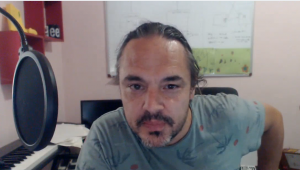 PipeWire has already made great strides forward in terms of improving the audio handling situation on Linux, but one of the original goals was to also bring along the video side of the house. In fact in the first few releases of Fedora Workstation where we shipped PipeWire we solely enabled it as a tool to handle screen sharing for Wayland and Flatpaks. So with PipeWire having stabilized a lot for audio now we feel the time has come to go back to the video side of PipeWire and work to improve the state-of-art for video capture handling under Linux. Wim Taymans did a presentation to our team inside Red Hat on the 30th of September talking about the current state of the world and where we need to go to move forward. I thought the information and ideas in his presentation deserved wider distribution so this blog post is building on that presentation to share it more widely and also hopefully rally the community to support us in this endeavour.

The current state of video capture, usually webcams, handling on Linux is basically the v4l2 kernel API. It has served us well for a lot of years, but we believe that just like you don’t write audio applications directly to the ALSA API anymore, you should neither write video applications directly to the v4l2 kernel API anymore. With PipeWire we can offer a lot more flexibility, security and power for video handling, just like it does for audio. The v4l2 API is an open/ioctl/mmap/read/write/close based API, meant for a single application to access at a time. There is a library called libv4l2, but nobody uses it because it causes more problems than it solves (no mmap, slow conversions, quirks). But there is no need to rely on the kernel API anymore as there are GStreamer and PipeWire plugins for v4l2 allowing you to access it using the GStreamer or PipeWire API instead. So our goal is not to replace v4l2, just as it is not our goal to replace ALSA, v4l2 and ALSA are still the kernel driver layer for video and audio.

It is also worth considering that new cameras are getting more and more complicated and thus configuring them are getting more complicated. Driving this change is a new set of cameras on the way often called MIPI cameras, as they adhere to the API standards set by the MiPI Alliance. Partly driven by this V4l2 is in active development with a Codec API addition, statefull/stateless, DMABUF, request API and also adding a Media Controller (MC) Graph with nodes, ports, links of processing blocks. This means that the threshold for an application developer to use these APIs directly is getting very high in addition to the aforementioned issues of single application access, the security issues of direct kernel access and so on. 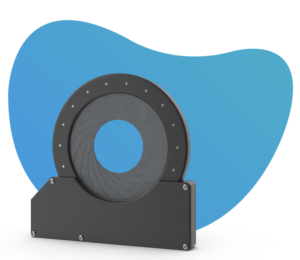 Libcamera is meant to be the userland library for v4l2.

Of course we are not the only ones seeing the growing complexity of cameras as a challenge for developers and thus libcamera has been developed to make interacting with these cameras easier. Libcamera provides unified API for setup and capture for cameras, it hides the complexity of modern camera devices, it is supported for ChromeOS, Android and Linux.
One way to describe libcamera is as the MESA of cameras. Libcamera provides hooks to run (out-of-process) vendor extensions like for image processing or enhancement. Using libcamera is considering pretty much a requirement for embedded systems these days, but also newer Intel chips will also have IPUs configurable with media controllers.

Libcamera is still under heavy development upstream and do not yet have a stable ABI, but they did add a .so version very recently which will make packaging in Fedora and elsewhere a lot simpler. In fact we have builds in Fedora ready now. Libcamera also ships with a set of GStreamer plugins which means you should be able to get for instance Cheese working through libcamera in theory (although as we will go into, we think this is the wrong approach).

Before I go further an important thing to be aware of here is that unlike on ALSA, where PipeWire can provide a virtual ALSA device to provide backwards compatibility with older applications using the ALSA API directly, there is no such option possible for v4l2. So application developers will need to port to something new here, be that libcamera or PipeWire. So what do we feel is the right way forward? 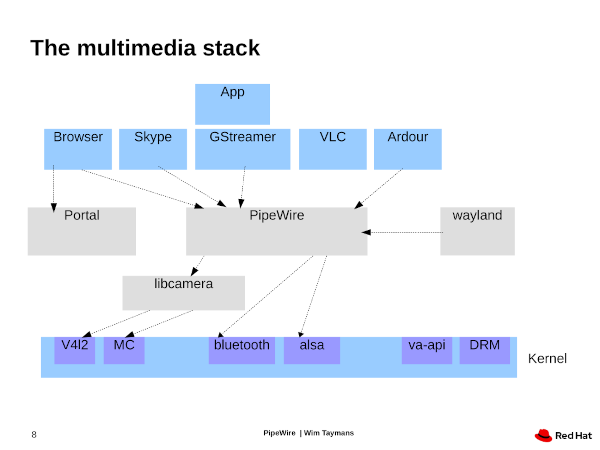 How we envision the Linux multimedia stack going forward

Above you see an illustration of what we believe should be how the stack looks going forward. If you made this drawing of what the current state is, then thanks to our backwards compatibility with ALSA, PulseAudio and Jack, all the applications would be pointing at PipeWire for their audio handling like they are in the illustration you see above, but all the video handling from most applications would be pointing directly at v4l2 in this diagram. At the same time we don’t want applications to port to libcamera either as it doesn’t offer a lot of the flexibility than using PipeWire will, but instead what we propose is that all applications target PipeWire in combination with the video camera portal API. Be aware that the video portal is not an alternative or a abstraction of the PipeWire API, it is just a way to set up the connection to PipeWire that has the added bonus of working if your application is shipping as a Flatpak or another type of desktop container. PipeWire would then be in charge of talking to libcamera or v42l for video, just like PipeWire is in charge of talking with ALSA on the audio side. Having PipeWire be the central hub means we get a lot of the same advantages for video that we get for audio. For instance as the application developer you interact with PipeWire regardless of if what you want is a screen capture, a camera feed or a video being played back. Multiple applications can share the same camera and at the same time there are security provided to avoid the camera being used without your knowledge to spy on you. And also we can have patchbay applications that supports video pipelines and not just audio, like Carla provides for Jack applications. To be clear this feature will not come for ‘free’ from Jack patchbays since Jack only does audio, but hopefully new PipeWire patchbays like Helvum can add video support.

So what is our plan of action>
So we will start putting the pieces in place for this step by step in Fedora Workstation. We have already started on this by working on the libcamera support in PipeWire and packaging libcamera for Fedora. We will set it up so that PipeWire can have option to switch between v4l2 and libcamera, so that most users can keep using the v4l2 through PipeWire for the time being, while we work with upstream and the community to mature libcamera and its PipeWire backend. We will also enable device discoverer for PipeWire.

We are also working on maturing the GStreamer elements for PipeWire for the video capture usecase as we expect a lot of application developers will just be using GStreamer as opposed to targeting PipeWire directly. We will start with Cheese as our initial testbed for this work as it is a fairly simple application, using Cheese as a proof of concept to have it use PipeWire for camera access. We are still trying to decide if we will make Cheese speak directly with PipeWire, or have it talk to PipeWire through the pipewiresrc GStreamer plugin, but have their pro and cons in the context of testing and verifying this.

We will also start working with the Chromium and Firefox projects to have them use the Camera portal and PipeWire for camera support just like we did work with them through WebRTC for the screen sharing support using PipeWire.

There are a few major items we are still trying to decide upon in terms of the interaction between PipeWire and the Camera portal API. It would be tempting to see if we can hide the Camera portal API behind the PipeWire API, or failing that at least hide it for people using the GStreamer plugin. That way all applications get the portal support for free when porting to GStreamer instead of requiring using the Camera portal API as a second step. On the other side you need to set up the screen sharing portal yourself, so it would probably make things more consistent if we left it to application developers to do for camera access too.

What do we want from the community here?
First step is just help us with testing as we roll this out in Fedora Workstation and Cheese. While libcamera was written motivated by MIPI cameras, all webcams are meant to work through it, and thus all webcams are meant to work with PipeWire using the libcamera backend. At the moment that is not the case and thus community testing and feedback is critical for helping us and the libcamera community to mature libcamera. We hope that by allowing you to easily configure PipeWire to use the libcamera backend (and switch back after you are done testing) we can get a lot of you to test and let us what what cameras are not working well yet.

A little further down the road please start planning moving any application you maintain or contribute to away from v4l2 API and towards PipeWire. If your application is a GStreamer application the transition should be fairly simple going from the v4l2 plugins to the pipewire plugins, but beyond that you should familiarize yourself with the Camera portal API and the PipeWire API for accessing cameras.

16 thoughts on “PipeWire and fixing the Linux Video Capture stack”