The last couple of week I’ve been on holiday and I spent some of that hacking on gthree. Gthree is a port of three.js, and a good way to get some testing of it is to port a three.js app. Benjamin pointed out HexGL, a WebGL racing game similar to F-Zero.

This game uses a bunch of cool features like shaders, effects, sprites, particles, etc, so it was a good target. I had to add a bunch of features to gthree and fix some bugs, but its now at a state where it looks pretty cool as a demo. However it needs more work to be playable as a game.

Check out this screenshot: 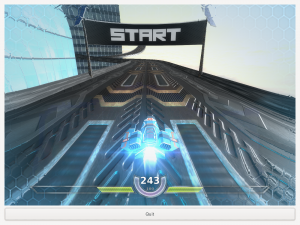 Or this (lower resolution) video:

If you’re interested in playing with it, the code is on github. It needs latest git versions of graphene and gthree to build.

I hope to have a playable version of this for GUADEC. See you there!