Newly added in this release is support for Raycaster, which is important if you’re making interactive 3D applications. For example, it’s used if you want clicks on the window to pick a 3D object from the scene. See the interactive demo for an example of this.

Also new is support for shadow maps. This allows objects between a light source and a target to cast shadows on the target. Here is an example from the demos: 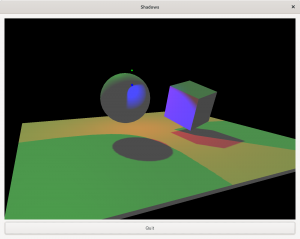 I’ve been looking over the list of feature that we support, and in this release I think all the major things you might want to do in a 3D app is supported to at least a basic level.

So, if you ever wanted to play around with 3D graphics, now would be a great time to do so. Maybe just build the code and study/tweak the code in the examples subdirectory. That will give you a decent introduction to what is possible.

If you just want to play I added a couple of new features to gnome-hexgl based on the new release. Check out how the tracks casts shadows on the buildings!

One thought on “Gthree – ready to play”