Good ‘ol Motherwell… last day of the season, losing 1-0 at home to Celtic with 2 minutes to go, Celtic are on course to win the league. Two minutes and two Scott McDonald goals later, we’ve won the game and handed the title to Rangers.

It’s a pity either of those teams and their glory-hunting followers had to win again this year (particularly the one managed by Alex McLeish, whose mis-management broke up the best team Motherwell ever had in recent times, and then did much the same at Hibernian), but it doesn’t half feel good to have screwed it up for one of them 🙂 With a bit of luck, maybe some of the droves who flock from here over to Scotland every week to watch Celtic and sing their sectarianism-inducing songs will finally realise that they’d be much better off diverting all that disposable income towards their local teams in Ireland instead, and then we’d all be happy.

About the only positive to take from Motherwell’s inexplicably poor performance in the CIS Cup Final
on Sunday is that at least Rangers didn’t make us look bad, which would
have made it much harder to stomach– we did it all by ourselves.
It was such an inept performance that I can’t even bring myself to be
annoyed about it… we had no bad luck, no near misses, no dodgy
refereeing decisions (well okay, there were quite a few of those actually!).  We just
played
like a pub team, and Rangers took full advantage.

Will be interesting to see how serious David Murray really is
about banning supporters from Ibrox who sing sectarian songs, though–
if he is, then after their performance on Sunday, expect the crowd at their next home game to consist entirely of away fans…

Somebody found my blog today by googling for ‘saying of funny Scottish grace‘. I do hope they found what they were looking for somewhere, whatever it was…

Nice touch from the SFL to commemorate the untimely death of Davie Cooper
at next month’s League Cup Final between Motherwell and Rangers– two
of the three teams he played for, and ten years to the week since he
collapsed and died of a brain haemorrage on the training pitch at the
age of 39. Coop was probably the last true Scottish football great, and
certainly the most outrageously talented player ever to grace a
Motherwell shirt in my lifetime. (Reputedly, while playing in an Old Firm
match for Rangers, he stuck the ball down on the penalty spot in front
of the Celtic fans during the pre-match warmup, strode up to it
confidently and, with unusual inaccuracy, hit the crossbar with his
attempted conversion. While the Celtic fans were going wild with glee,
he retrieved the ball, put it back on the penalty spot, and proceeded
to hit the crossbar with pinpoint accuracy another three times in
succession. Apocryphal or not, it’s exactly the sort of thing he could have done…)

He was born and lived not far from me (well, before I left home
anyway)… in his amateur days, he played for a team coached by my
French teacher, and his funeral was held at my local church—
quite an event in itself for an unassuming wee place, with the streets
around lined with fans of many Scottish teams, and the mourners
including the likes of Sir Alex Ferguson, and current Scotland coach Walter Smith — how he could do with another Davie Cooper these days.

Thanks to Bastien for spotting this one…

No 1991 Cup Final replay for us after all… Rangers just managed to sneak past Dundee Utd in the other semi-final by, er… 7-1. And they missed a penalty. Uh-oh…. 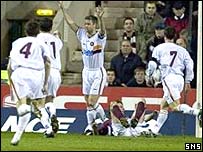 After a fifty year gap, Motherwell reached this season’s League Cup Final last night, with a typically-nailbiting performance over Hearts… Marc Fitzpatrick‘s 120th minute extra time goal seeing us squeak through 3-2 (and him sealing his Fir Park immortality), having thrown away a 2-0 lead with five minutes of normal time remaining.

Hopefully Dundee Utd can see off Rangers tomorrow night, to set up a repeat of the classic 1991 Scottish Cup Final… but somehow I doubt it.

A pretty uneventful Christmas and New Year was had by all, in my household– mostly because I live alone! I did a lot of gadding around, though… England the weekend before Chrimbo, back in Dublin for Christmas Day, Scotland on the 26th, and back in the Emerald Isle for Hogmanay. All for under 100 quid, thanks to Mr. Ryan.

New Year’s Eve in Dublin is crap, though– half the pubs are shut and the only free ‘event’ involves hanging around outside a dingy cathedral waiting for the midnight chimes, then going home!

The dressing room bust-up down Fir Park way seems to have done the trick, though… the ‘Well are back to their winning ways, with fine victories over Dundee and Dundee Utd in the space of a week.