I’ve been working with two large (still un-named) vendors about their required features for the Linux Vendor Firmware Service. One of the new features I’ve landed this week in the test instance are the different user modes. 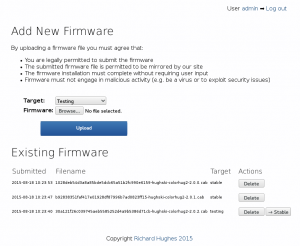 There are currently three classes of user:

This allows a firmware engineer to upload files before the new hardware has launched, and then someone else from the QA or management team can test the firmare and then push it out to the firmware so it can be flashed on real hardware by users.

I’ve also added functionality so that users can also change their own password (moving away from vendor keys) and added a simple test suite to test all the new rules.