I’m finally able to talk about one of the large vendors who have been trialing the LVFS service for the last few months. Dell have been uploading embargoed UEFI firmware files with metadata for a while, testing the process and the workflow ready for upcoming new models. Mario (Dell) and myself (Red Hat) have been working on fixing all the issues that pop up on real hardware and making the web service both secure and easy to use. 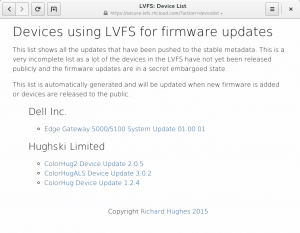 The Dell Edge Gateway will be available for purchase soon. When it goes on sale, firmware updates in Linux will work out-of-the-box. I’ve been told that Dell are considering expanding out the LVFS support to all new models supporting UEFI updates. In order to prioritize what models to work on first, I’ve been asked to share this anonymous survey on what Dell hardware people are using on Linux and to gauge if people actually care about being able to upgrade the firmware easily in Linux.

In November, 224 firmware files were installed onto client systems using fwupd. At the moment to update the firmware metadata you need to manually click the refresh button in the updates page, which so far 40,000 people have done. Given that the ColorHug hardware is the only released hardware with firmware on the LVFS, the 224 downloads is about what I expected. When we have major vendors like Dell (and other vendors I can’t talk about yet) shipping real consumer hardware with UEFI update capability the number of files provided should go up by orders of magnitude.

For Fedora 24 we’ll be downloading the firmware metadata automatically (rather than requiring a manual refresh in the updates panel) and we’ve been using the Fedora 23 users as a good way of optimizing the service so we know we can handle the load when we get hundreds of thousands of automatic requests a month. Fedora 24 will also be the first release able to do updates on DFU USB devices, and also the first release with system upgrade capabilities inside GNOME Software so it’s quite exciting from my point of view.

With Dell on board, I’m hoping it will give some of the other vendors enough confidence in the LVFS to talk about distributing their own firmware in public. The LVFS is something I run for all distributions free of charge, but of course Red Hat pays for my time to develop and run the service. I’m looking forward to working with more Red Hat partners and OpenHardware vendors adding even more firmware for even more types of device in the future.