Choosing an application to install is hard when there are lots of possible projects matching a specific search term. We already list applications based on the integration level and with useful metrics like “is it translated in my language” and this makes sure that high quality applications are listed near the top of the results. For more information about an application we often want a more balanced view than the PR speak or unfounded claims of the upstream project. This is where user-contributed reviews come in. 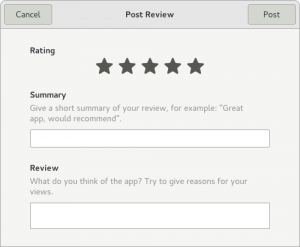 To get a user to contribute a review (which takes time) we need to make the process as easy as possible. Making the user create a user account on yet-another-webservice will make this much harder and increase the barrier to participation to the point that very few people would contribute reviews. If anonymous reviewing does not work the plan is to use some kind of attestation service so you can use a GMail or Facebook for confirming your identity. At this point I’m hoping people will just be nice to each other and not abuse the service although this reviewing facility will go away if it starts being misused.

Designing an anonymous service is hard when you have to be resilient against a socially awkward programmer with specific political ideologies. If you don’t know any people that match this description you have obviously never been subscribed to fedora-devel or memo-list.

Obviously when contacting a web service you share your IP address. This isn’t enough to uniquely identify a machine and user, which we want for the following reasons:

A compromise would be to send a hash of two things that identify the user and machine. In GNOME Software we’re using a SHA1 hash of the machine-id and the UNIX username along with a salt, although this “user_id” is only specified as a string and the format is not checked.

For projects like RHEL where we care very much what comments are shown to paying customers we definitely want reviews to be pre-approved and checked before showing to customers. For distros like Fedora we don’t have this luxury and so we’re going to rely on the community to self-regulate reviews. Reviews are either up-voted or down-voted according how useful they are along with the nuclear option of marking the review as abusive.

By specifying the users current locale we can sort the potential application reviews according to a heuristic that we’re still working on. Generally we want to prefer useful reviews in the users locale and hide ones that have been marked as abusive, and we also want to indicate the users self-review so they can remove it later if required. We also want to prioritize reviews for the current application version compared to really old versions of these applications.