With a huge amount of help from Robert Ancell for a lot of the foundations for the new code, I’ve pushed a plugin today to allow anonymous rating of applications. 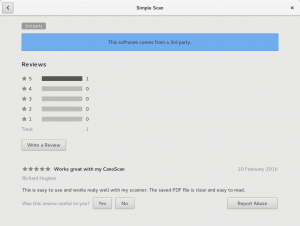 If people abuse or spam this I’ll take the feature away until we can have OpenID logins in GNOME Online Accounts, but I’m kinda hoping people won’t be evil. The server is live and accepting reviews and votes, but the API isn’t set in stone.

2 thoughts on “Comments are live”