I’m pondering adding something like this for GNOME Software: 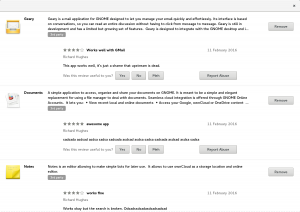 The idea is it would be launched using a special geeky-user-only gnome-software --mode=moderate command line, so that someone can up or down-vote any reviews that are compatible with their country code. This would be used by super-users using community distros like Fedora, and perhaps people in a QA team for distros like RHEL. The reason I wanted to try to use gnome-software rather than just doing it in a web-app was that you have access to the user machine hash, so you can hide reviews the user has already voted on without requiring a username and password that has to be matched to the local machine. We also have all the widgets and code in place, so it is really just a couple of hundred lines of code for this sekret panel. The server keeps track of who voted on what and so reviewers can just close the app, open it a few weeks later and just continue only moderating the reviews that came in since then.

I can’t imagine the tool would be used by many people, but it does make reviewing comments easy. Comments welcome.