The Open Age Ratings Service is a simple website that lets you generate some content rating XML for your upstream AppData file. 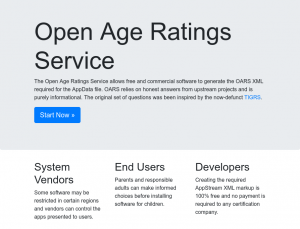 In the last few months it’s gone from being hardly used to being used multiple times an hour, probably due to the requirement that applications on Flathub need it as part of the review process. After some complaints, I’ve added a ton more explanation to each question and made it easier to use. In particular if you specify that you’re creating metadata for a “non-game” then 80% of the questions get hidden from view.

As part of the relaunch, we now have a proper issue tracker and we’re already pushed out some minor (API compatible) enhancements which will become OARS v1.1. These include several cultural sensitivity questions such as:

The cultural sensitivity questions are work in progress. If you have any other ideas, or comments, please let me know. Also, before I get internetted-to-death, this is just for advisory purposes, not for filtering. Thanks.