Update 2021-11-12: System76 is now using the LVFS to distribute firmware. We’re working together to put much more firmware on the LVFS in the future.

System76 is a hardware vendor that builds laptops with the Pop_OS! Linux distribution pre-loaded. System76 machines do get firmware updates, but do not use the fwupd and LVFS shared infrastructure. I’m writing this blog post so I can point people at some static text rather than writing out long replies to each person that emails me wanting to know why they don’t just use the LVFS.

In April of last year, System76 contacted me, wanting to work out how to get on the LVFS. We wrote 30+ cordial emails back and forth with technical details. Discussions got stuck when we found out they currently use a nonfree firmware flash tool called afuefi rather than use the UEFI specification called UpdateCapsule. All vendors have support for capsule updates as a requirement for the Windows 10 compliance sticker, so it should be pretty easy to use this instead. Every major vendor of consumer laptops is already using capsules, e.g. Dell, HP, Lenovo and many others.

There was some resistance to not using the proprietary AUEFI executable to do the flashing. We certainly can’t include the non-free and non-redistributable afuefi as a binary in the .cab file uploaded to the LVFS, as even if System76 does have special permission to distribute it, as the LVFS would be a 3rd party and is mirrored to various places. IANAL and all that.

An employee of System76 wrote a userspace tool in rust to flash the embedded controller (EC) using a reverse engineered protocol (fwupd is written in C) and the intention was add a plugin to fwupd to do this. Peter Jones suggested that most vendors just include the EC update as part of the capsule as the EC and system firmware typically form a tightly-coupled pair. Peter also thought that afuefi is really just a wrapper for UpdateCapsule, and S76 was going to find out how to make the AMI BIOS just accept a capsule. Apparently they even built a capsule that works using UpdateCapsule.

I was really confused when things went so off-course with a surprise announcement in July that System76 had decided that they would not use the LVFS and fwupd afterall even after all the discussion and how it all looked like it was moving forwards. Looking at the code it seems the firmware update notifier and update process is now completely custom to System76 machines. 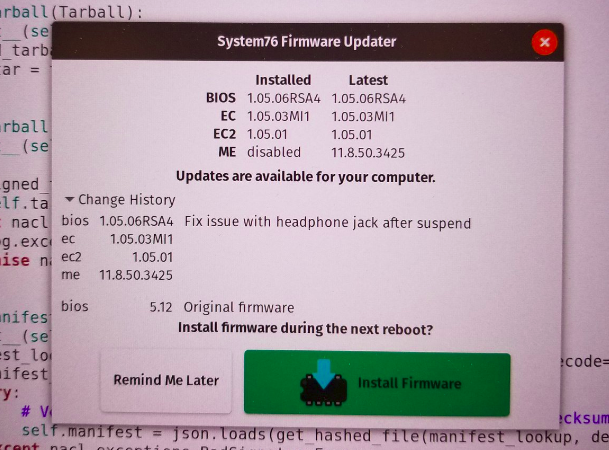 Apparently System76 decided that having their own client tools and firmware repository was a better fit for them. At this point the founder of System76 got cc’d and told me this wasn’t about politics, and it wasn’t competition. I then got told that I’d made the LVFS and fwupd more complicated than it needed to be, and that I should have adopted the infrastructure that System76 had built instead.

The way forward from my point of view would be for System76 to spend a few hours making UpdateCapsule work correctly, another few days to build an EFI binary with the EC update, and a few more hours to write the metadata for the LVFS. I don’t require an apology, and would happily create them a OEM account on the LVFS. I guess it might make sense for them to require Pop_OS! on their hardware but it’s not going to help when people buy System76 hardware and want to run Red Hat Enterprise Linux in a business. It also means System76 also gets to maintain all this security-sensitive server and client code themselves for eternity.

It was a hugely disappointing end to the discussion as I had high hopes System76 would do the right thing and work with other vendors on shared infrastructure. I don’t actually mind if System76 doesn’t use fwupd and the LVFS, I just don’t want people to buy new hardware and be disappointed. I’ve heard nothing more from System76 about uploading firmware to the LVFS or using fwupd since about November, and I’d given multiple people many chances to clarify the way forward.