A few days ago I asked people to upload their NVMe “cns” data to the LVFS. So far, 908 people did that, and I appreciate each and every submission. I promised I’d share my results, and this is what I’ve found: 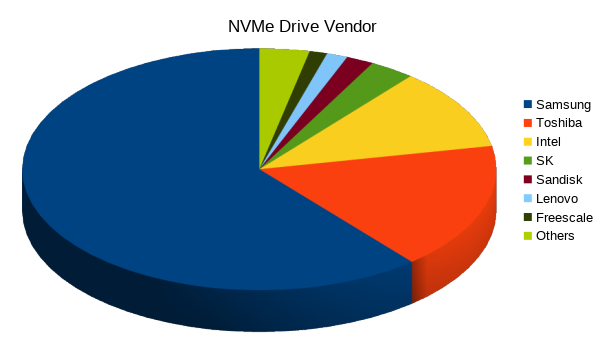 Number of vendors implementing slot 1 read only “s1ro” factory fallback: 10 – this was way less than I hoped. Not all is lost: the number of slots in a device “nfws”indicate how many different versions of firmware the drive can hold, just like some wireless broadband cards. The idea is that a bad firmware flash means you can “fall back” to an old version that actually works. It was surprising how many drives didn’t have this feature because they only had one slot in total: 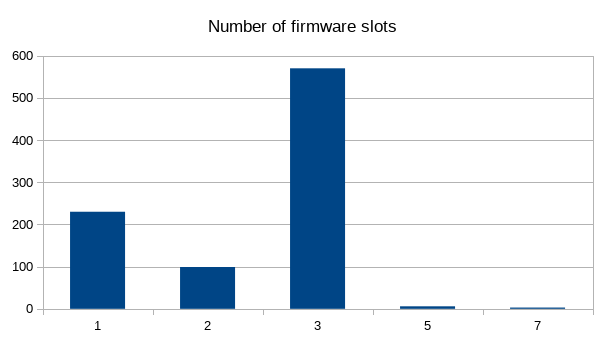 I also wanted to know how many firmware versions there were for a specific model (deduping by removing the capacity string in the model); the idea being that if drives with the same model string all had the same version firmware then the vendor wasn’t supplying firmware updates at all, and might be a lost cause, or have perfect firmware. Vendors don’t usually change shipped firmware on NMVe drives for no reason, and so a vendor having multiple versions of firmware for a given model could indicate a problem or enhancement important enough to re-run all the QA checks: 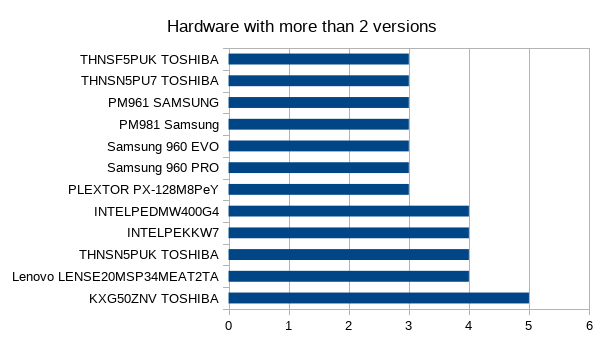 So, not all bad, but we can’t just assume that trying to flash a firmware is a safe thing to do for all drives. The next, much bigger problem was trying to identify which drives should be flashed with a specific firmware. You’d think this would be a simple problem, where the existing firmware version would be stored in the “fr” firmware revision string and the model name would be stored in the “mn” string. Alas, only Lenovo and Apple store a sane semver like 1.2.3, other vendors seem to encode the firmware revision using as-yet-unknown methods. Helpfully, the model name alone isn’t all we need to identify the firmware to flash as different drives can have different firmware for the laptop OEM without changing the mn or fr. For this I think we need to look into the elusive “vs” vendor-defined block which was the reason I was asking for the binary dump of the CNS rather than the nvme -H or nvme -o json output. The vendor block isn’t formally defined as part of the NVMe specification and the ODM (and maybe the OEM?) can use this however they want.

Only 137 out of the supplied ~650 NVMe CNS blobs contained vendor data. SK hynix drives contain an interesting-looking string of something like KX0WMJ6KS0760T6G01H0, but I have no idea how to parse that. Seagate has simply 2002. Liteon has a string like TW01345GLOH006BN05SXA04. Some Samsung drives have things like KR0N5WKK0184166K007HB0 and CN08Y4V9SSX0087702TSA0 – the same format as Toshiba CN08D5HTTBE006BEC2K1A0 but it’s weird that the blob is all ASCII – I was somewhat hoping for a packed GUID in the sea of NULs. They do have some common sub-sections, so if you know what these are please let me know!

I’ve built a fwupd plugin that should be able to update firmware on NVMe drives, but it’s 100% untested. I’m going to use the leftover donation money for the LVFS to buy various types of NVMe hardware that I can flash with different firmware images and not cry if all the data gets wiped or the device get bricked. I’ve already emailed my contact at Samsung and fingers crossed something nice happens. I’ll do the same with Toshiba and Lenovo next week. I’ll also update this blog post next week with the latest numbers, so if you upload your data now it’s still useful.

2 thoughts on “Adventures with NVMe, part 2”