In upcoming GXml 0.14, there will be a new DOM4 implementation called GomDocument, it along with GomElement and GomObject, provides support to serialize or deserialize GObject object to or from XML files. 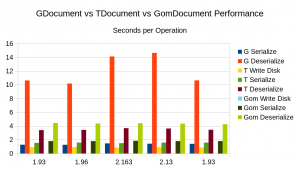 In performance test, we use a 3.5 MB file with a lot of nodes, read it and then create an internal in memory XML tree and then fill out your GObject class properties, we measure required time to deserialize and then time to write it back to an XML file.

We can see GDocument taking a lot of time on deserialize, because it uses libxml2  to create a tree and GXml.SerializableObjectModel to fill out your GObject class. Serialize is very competitive, because all implementations, use almost same engine: direct access to libxml2 by xmlWriter.

GomDocument, is very competitive if compared to TDocument, but can perform much better than GDocument.

Please note that GomDocument time to write to disk is not available, because serialization and deserialization is make in one go, then may be we case reduce this time (should be the same from others  because the file is loaded in memory before to read) and then this makes GomDocument to perform even better!! 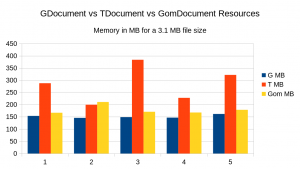 On memory usage, TDocument requires much more memory and GDocument is the one to defeat. GomDocument now requires almost same memory than GDocument.

GomDocument is the way to go on Serialization framework for GXml. These results will help LibreSCL, to provide a very competitive serialization/deserialization framework and consider to create a WEB based application using GObject Introspection and Python to access very large files, without requiring lot of memory resources and may be a good response time on reading.

I’m starting to stabilize GXml to release 0.14 as soon as I can found most bugs on parse XML files. GXml’s GomDocument have a set of errors detection, based on DOM4, not present in other GXml implementations, making it more sensitive to some files and may not affecting (or detected) by libxml2, for example.

Linux and GNOME user, full time, since 2001. Actual maintainer of GXml and contributor to other projects mainly on GObject Introspection support. View all posts by despinosa