Within a short period, two people showed up with proposals for games for inclusion with GNOME 3.16. One is a 2048 clone, the other is a revival of Atomix (last maintenance was GNOME 2.14). Both proposals seem to be maintained by just one person.

The 2048 clone might use a not-yet finished library. The usage of that library will help development of the library (easier when you have use cases, etc). Atomix needs to be ported from old technologies to the latest ones. If I’m not mistaken, I think I encouraged the inclusion of Atomix during the 2.x days.

I’m quite looking forward to having both games available on my machine. Being a packager for Mageia means that I can basically decide when that’ll be. Though Mageia currently is gearing up to Mageia 5 and that put limits on what I can do.

Game development by one person

The number of people on average making a games development by has differed a lot over since 1980s. Initially it was often one person, eventually big teams, then smaller again (flash games), etc. Jeff Wofford wrote a very detailed log of his experiences pursuing game development. According to the blog, one-man game development is done out of interest, but often also to make a (good) living.

Making money from game development in recent times is very short lived. If you make a game, it’ll quickly get cloned. Quite interesting is the number of available applications in the iOS app store. 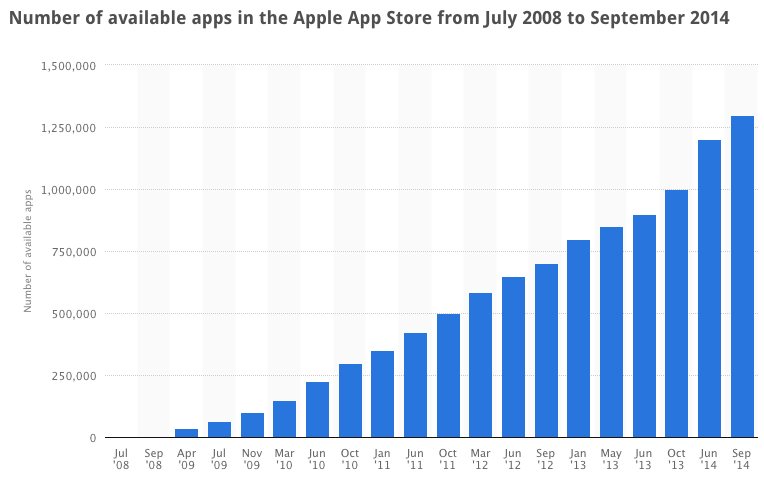 I have no idea how long it takes to create a nice game for a mobile iOS. I do think above graph impresses me: more than 1.2 million apps within 4.5 years. How long have distributions been around? I recall trying either Red Hat 5.0 or 5.2.

How would this work under the distribution model?

Packing does have various benefits from a technical standpoint. No duplication of libraries, entire QA process, etc. I package at Mageia and I don’t like anything that’s not packaged. I basically won’t install it unless there’s a package for it.

To notice new versions, distributions use various methods. Fedora tries to download a potential higher number than whatever is within the distribution. It uses that to notify the packager. Then for various well known download sites (e.g. download.gnome.org) it checks the directory. At Mageia we check various download sites as well as other distributions. Which gets messy as we sometimes use a slightly different name.

If your developing a game or small application for Linux, the experience is just terrible.

Various people within GNOME are creating a freedesktop.org additional way to distribute games and applications. Meaning: the intention is that it works not just for GNOME, nor just for one distribution. The details are available on https://wiki.gnome.org/Projects/SandboxedApps, though I’ll just copy/paste the two main goals:

On Feb 7 2015 at DevConf.cz, Alexander Larsson gave a talk about application sandboxing:

As the talk is about 45 minutes I’ll just recap a few things from it:

Now I didn’t fully watch the entire talk, nor read all of the discussion around it. I know that NVidia will only release their proprietary versions which will work with Wayland beginning of 2016 or so. The talk mentions wanting to use kdbus, which doesn’t have to be systemd-only, but, well…

It’s unfortunate that this talk wasn’t given at FOSDEM. There was one talk about Wayland+systemd application sandboxing, but I found it very lacking (I expected something like what Alexander Larsson spoke about).

I skipped over many details in this post. If you want more details, see the various links, post a comment or ask the people who actually know. For that and also if you want to work on something technically interesting: join the gnome-os-list mailing list.