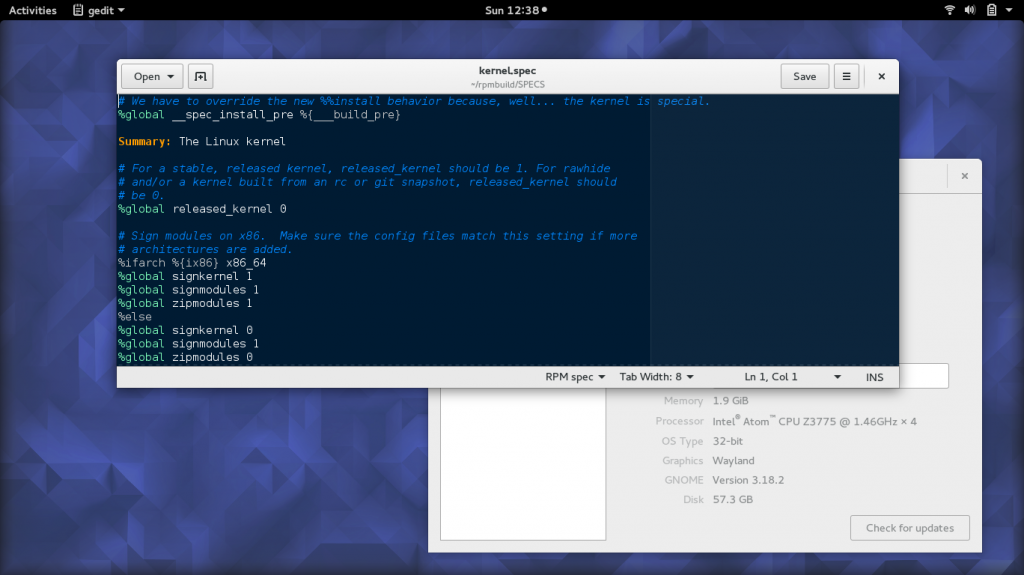 As Pa Bailey might have put it, it’s deep in the race to want to run GNOME on your tablet. At last year’s Libre Graphics Meeting in Toronto, pippin displayed GNOME on his Lenovo MIIX 3 Bay Trail device. A few months later I was able to pick up an ASUS T100TA with similar specs (if not as elegant) for a good discount. Adam Williamson’s latest Fedlet release was days old at the time, and I installed it.

I’ve been through the Fedlet installation three times, the second and third installs necessitated by some newfound inherent skill at rendering the device unusable. The installation is nerve-wracking on account of some missing or invisible buttons in Anaconda, so I’d rather upgrade than re-install. The processor supports 64-bit Linux with 32-bit UEFI, but at this point I’m happy with the 32-bit kernel. (The experience of local LUG members suggests the Debian multiarch installer will address the 32-bit UEFI while installing a 64-bit system, but a brand new Ubuntu installer will not.)

There’s a Google+ Community dedicated to running Ubuntu on the different varieties of T100. After some weeks of reading about further advances specific to the hardware, I wasn’t satisfied with the Fedlet 4.2 kernel and decided to build a newer one. For ease of installation and removal, Fedora kernel packages are worth the small effort required beyond simply compiling a kernel. The procedure on the wiki page is pretty comprehensive; below are the changes I needed to get mine working. First some notes:

Asus T100 Ubuntu: progress reports, patches and config file, sound configuration (sound works with kernels older than 4.6-rc* but so far 4.6 breaks it). The About this community panel has a Google Drive link called Asus Files with all the good stuff.

These are the sections I follow from Building a custom kernel. Please consult the original page for the details.

Skip to…
Building a kernel from the source RPM: Get the Source
I grab the kernel source package from Koji that corresponds to the patches in the Google Drive folder.

Use ‘target=i686’ if building on my x86_64 laptop (hypothetical at this point since I haven’t successfully done this).

Copy the Source Tree and Generate a Patch
Skip this section: at this point I apply the patches (from the Google+ page) directly to the linux-* folder. I’ve performed the operation of copying the tree to create a single patch, but haven’t been successful automating it with ApplyPatch in the .spec file.

Configure kernel options
Copy in the config file acquired from the Google+ page.
Step 5 is i686.

Prepare Build Files
Customize the buildid in the .spec file (.mdh in my case).

Build the New Kernel
Use ‘noprep’ to prevent refreshing the source tree and re-applying the Fedora patches.

Use ‘target=i686’ if (someday) building on my x86_64 laptop.
On occasion at this point I need to rename the ~/rpmbuild/BUILD/kernel-*/linux-* folder to include the buildid  and fc23 instead of the version from the source rpm (currently fc25).

I usually do the last step with the power connected, but occasionally carry it to the car and back for the trip to work, so as not to interrupt the build. If it finishes, a full set of packages should appear in ~/rpmbuild/RPMS/i686.

3 thoughts on “Packaging a Fedora kernel on a GNOME tablet”