Hi all, long time no blog !

As is usual when a long time has passed without blogging, we end up with a mish mash of subjects which, ideally should go into separate posts. Sorry about that, I’ve titled this post “A build of GNOME from scratch” because that’s what I’ll be focusing on most here.

First, I have been out of touch for some time with GNOME, mostly because I have been involved with my own Canada based startup company which has been juicing me for every spare hour of work I could lay my hands on. This of course takes a toll on your life in general so the time has come to slow down the pace a bit for the sake of retaining a small measure of sanity.

So this is mostly why I have not been involved in GNOME as much as I would have liked in recent years, but fear not; I am back and hope to be solving problems *cough* causing trouble on a regular basis again 🙂

In late 2015, I have started to play for team Codethink.

I am very happy with the new arrangement for a number of reasons. One of them of course being that I will be able to make some FOSS contributions again in the course of my work. The other reason, is that when it comes to consulting company logos there is no competition, we obviously have the coolest logo:

But seriously, I am both proud and humbled to be working along side such a talented group of individuals.

A build of GNOME from scratch

The majority of the work I’ve been doing so far with Codethink has been to build and integrate a GNOME reference build with the Baserock build system.

I’ll probably return at some point to give a more thorough explanation of exactly what Baserock is and what it is not, but that is not the point of this post, suffice to say that it is a build system and as of the close of 2015 it includes a reference build of GNOME which is quite functional and fairly well integrated.

Some of the things I’m happy about:

When booting the Baserock GNOME image, you can choose your language and input method. This just works, launch the control center and enter the “Region and Languages”, choose your input method, and it just works.

I have yet to see a distribution which does this. To get my Korean input method working, I usually have to ask google about it, find out what packages I need to install (sometimes with multiple ways to set it up) and in some cases I’ve needed to inject things into my environment manually to get it working.

The online desktop experience works throughout the user experience. This means we’ve sorted out PAM hell and have the keyring unlocked with the user login.

It also means that we’ve got gnome-initial-setup working properly again after some bitrot. So when you create the first regular user on the OS with gnome-initial-setup, the online accounts credentials get handed off to the new user seamlessly (the above linked patch still needs to be merged upstream, though).

Geoclue also works, so when you boot up your GNOME system for the first time, geoclue guesses your timezone automatically, even if you’ve selected a locale.

Audio and Video works for most popular formats, pulseaudio is working and all of the important GStreamer bits are there.

Firing up epiphany will allow you to watch (and listen to) videos on the web, except for youtube (but that’s ok, epiphany also does not play youtube videos on my debian system, apparently there are still things in WebKitGtk blocking that).

Most of the core GNOME apps are integrated with a few exceptions. 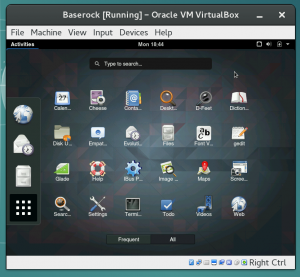 All of the apps you see in the screenshot actually work… Which sounds pathetic, but I assure you it’s more than just building the apps themselves, there are unfortunately many subtle details to get right in a fully integrated desktop experience, and we’re not quite there yet but pretty darn close.

Where this is all going right now is not entirely decided. For starters, the GNOME build will serve as a better real world test case for the Baserock infrastructure.

There is talk about scripting this so as to output nightly images, so that one could potentially try out a bleeding edge nightly GNOME image fresh from git master at any time.

Crashing the party in Brussels

I will be crashing the DX hackfest in Brussels at the end of the month. I’ve inserted myself in the list next to Juan Pablo because I’m so shy that I would prefer to lurk in his shadow 🙂

I hope to close a lot of Glade bugs at the hackfest and get closer to the goal of properly supporting all of the UI files in the GTK+ tree. I also look forward to hearing more about Builder and seeing what we can do on our side to make that developer experience better.

This coding sprint for Glade is of course brought to you by Codethink, and I would like to personally thank Codethink for the opportunity to attend FOSDEM for the first time.

3 thoughts on “A build of GNOME from scratch”