This is another followup post in the BuildStream series.

As I’ve learned from my recent writings on d-d-l, it’s hard to digest information when too much of it is presented at once, so today I’m going to try to talk about one thing only: A continuous migration path for moving away from the JHBuild modulesets to the YAML files which BuildStream understands.

It would be possible to just provide a conversion tool (which is indeed a part of the mechanics we’ve put in place), but that would leave GNOME in a situation where there would have to be a decided “flag day” on which the JHBuild based modulesets would be deprecated and everyone would have to move at once.

This continuous migration allows us to improve the user and maintainer story in BuildStream, and allows people to try building GNOME with BuildStream along the way until such a point that the GNOME release team and community is ready to take a plunge.

How does it work ?

The migrations are running on a dedicated server (which just happens to be one of the servers that Codethink contributed to build GNOME things on arm architectures last year) and there are a few moving parts, which should be quite transparent to the end user.

Here is a little diagram I threw together to illustrate the big picture: 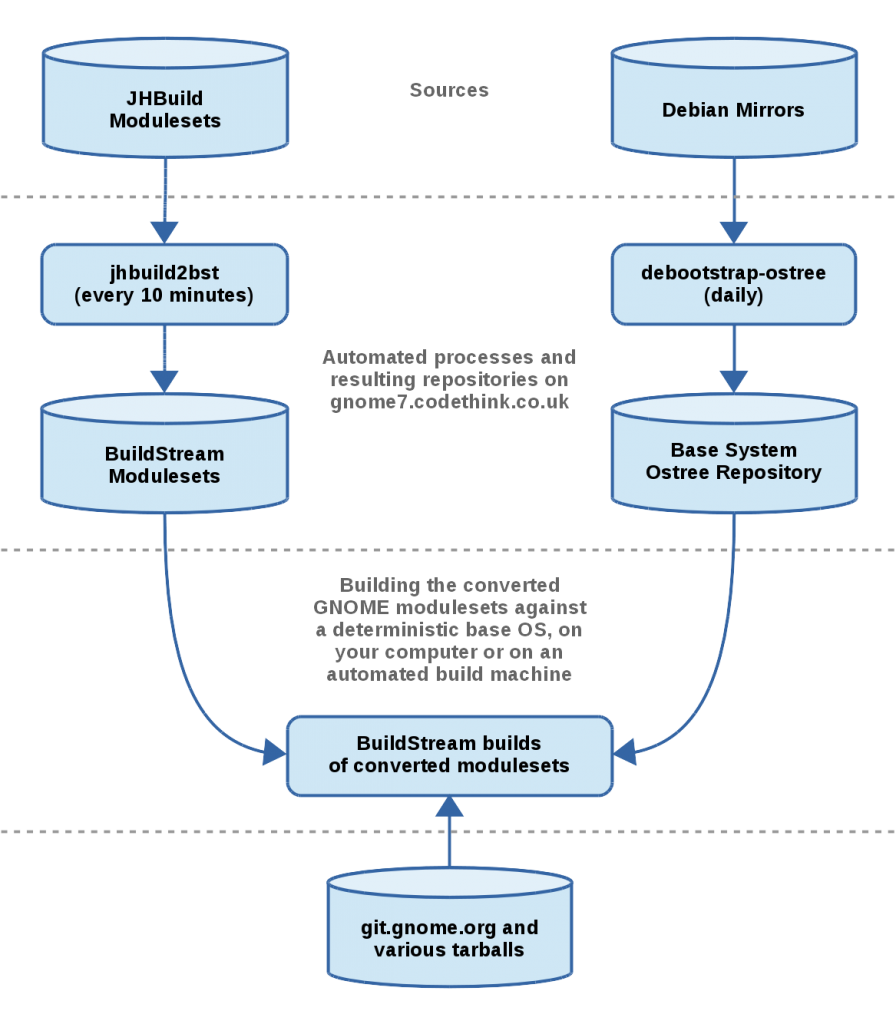 One of the beautiful things about BuildStream is that we do not ever allow host tools or dependencies to infiltrate the build sandbox. This means that in order to obtain the system dependencies required to build GNOME, we need to provide them from somewhere. Further, we need that source to be something revisioned so that builds can be reproducible.

The debootstrap-ostree script does this by running debian’s multistrap program to cross bootstrap the GNOME system dependencies (currently using debian testing) for the four architectures we are currently interested in: i386, x86_64, arm and aarch64.

This process simply commits the results of the multistrap into an ostree repository that is hosted on the same machine, and is running once daily.

In case you are wondering “why use a debian base” instead of “my favorite distro foo” the answer is just that time is precious and this was very easy to setup. With that said, longer term I think it will be interesting to setup a service for running builds against a multitude of baselines (as I tentatively outlined in this message).

The jhbuild2bst conversion program is a fork of upstream JHBuild itself, this was just the easiest way to do it as we leverage all of the internal XML parsing logic.

Again because of the “no host dependency” nature of BuildStream, there is some extra static data which goes into the conversion. This data defines the base system that everything we convert depends on to build. Naturally this static data defines a BuildStream element which imports the debootstrap-ostree output, you can take a look at that here.

The automated conversion works by first checking out the latest gnome-modulesets-base repository and then running jhbuild2bst in that repository to get a conversion of the latest upstream jhbuild modulesets and the latest static data together.

This conversion runs every 10 minutes on gnome7.codethink.co.uk and result in a noop in the case that the static data and upstream modulesets have not changed. The output is then committed to the master branch of this git repository.

In addition to the automated conversions taking place above which produce output in the master branch of the automated git repository, there is another task which runs bst track on the same output, this is a heavier workload and runs less frequently than the conversions themselves.

So what is “bst track” exactly ?

If you look at the GNOME modulesets, you will find that (except for in previous stable releases which refer to precise tarball versions), the currently developed version of GNOME specifies only branches for every module.

The raw conversions (available in the master branch of the converted repo) will only show the tracking branches taken from the jhbuild modulesets, but running “bst track” will modify the BuildStream project inline with the latest source references for each respective tracking branch.

As BuildStream favors determinism, it will refuse to build anything without explicit references to an exact set of inputs, however BuildStream will automate this part for the user with “bst track” so you don’t have to care. It is however important to us that the activity of changing your exact source references be an explicit one. For instance, BuildStream also now supports “bst build –track” so that you can track the newest source references on each branch and then build them, all in one session.

While it is certainly possible to just grab the latest conversion from the master branch and build it with “bst build –track”, it is also interesting that we have a repository where it has been done automatically. This allows me to say that I have build exactly this <commit sha> from the tracking branch, and that if you build the same commit on your host, the results you get will be exactly the same.

To get the latest tracked sources:

First, install buildstream by following the “Installing BuildStream” instructions in the documentation.

Now lets say you want to run something that you’ve built:

Warning:  This will take around around 15GB of disk space (better have 20) and a lot of processing (on my very powerful laptop, just over 2 hours to build around 130 modules). The artifact sharing feature which is almost complete at this time will help to at least reduce the initial amount of disk space needed to get off the ground. Eventually (and after we get dual cache key modes implemented) if there are enough builders contributing to the artifact cache, you will be able to get away with only building the modules you care about working on.

Jokes aside, the next steps for this will be to leverage the variants feature in BuildStream to allow building multiple variants of GNOME pipelines. Most particularly, we will want to build a subset only of the GNOME modulesets against the freedesktop-sdk-images runtime as a base, and output a GNOME Flatpak runtime. This will be particularly challenging as we will have to integrate this into the continuous conversion, so it will most probably have to just take a list of which modules in the modulesets we want to include in the output GNOME Flatpak runtime.

Also, for the full GNOME builds, we will be looking into creating a single target which encompasses everything we want to roll into a desktop system and generate bootable images directly from the continuously converted GNOME builds.