In my last post I’ve promised that the next one would have screenshots of new developments in the Files app, and it’s finally here!

It took me longer than I expected back then. After the 3.38 release, I had to focus my time elsewhere: assisting and training local primary health care teams in managing and following up of the raising number of COVID-19 cases assigned to them. With this mission accomplished, in December I’ve picked up again on my GNOME contributions and have something to show you now.

Last week we have reached the alpha milestone for the upcoming version 40 of GNOME Files. The highlights of this pre-release milestone are a long requested feature to show files creation timestamps and an enhancement to the Set as Wallpaper action.

This was made possible thanks to Thunar developer Andre Miranda’s laudable initiative to implement the low-level glue for all GIO-based apps to benefit from. It was then easy for me to add the column to list view, and for Apoorv Sachan to add it to the Properties dialog (a nice follow-up to his GSOC project cleaning up the Properties code and UI).

This is a new feature, so it would be great to have people testing it before the final release. It’s easy to test, see instructions at the end of this post.

There as some open questions:

There is a “Set as Wallpaper” action in the context menu for image files, which had a few odd behaviors which were not in sync with the user experience provided by the Settings app.

Thanks to Felipe Borges, not only have these problems been fixed, but the feature has been enhanced! Now you get a preview of the wallpaper, so you can confirm this was the correct picture and whether it’s going to look good, before confirming the desktop wallpaper change. 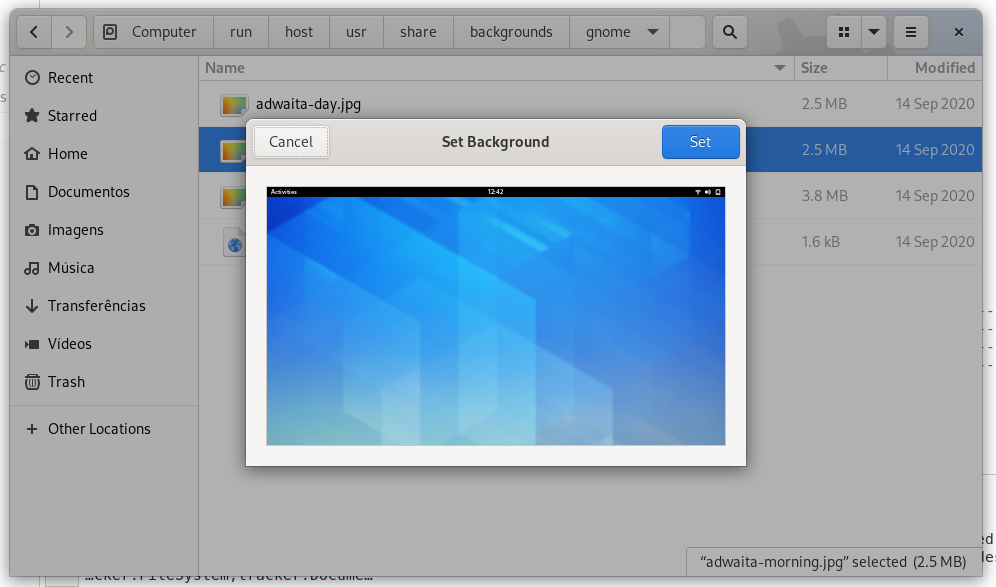 This is provided by the wallpaper portal created for sandboxed apps, but it works even outside Flatpak.

There are some more enhancements which didn’t make it into this milestone, but which I hope to be able to deliver before the beta milestone. I’ll talk about them in a future post.

I’m also very happy to see many new contributors fixing both major and minor bugs and implementing exciting features in the Files app. Now, back to reviewing the MRs, so that I can highlight their contributions in a future post!

For testing the latest developments in GNOME Files, without modifying the Files app in your system, there is a Nightly flatpak. To install it, copy and run the following command in a Terminal:

The Nightly can now be launched from Activities, or with this command:

(If your operating system doesn’t support flatpak out of the box, see the Quick Setup guide.)