I think I’ve just about caught up on sleep, four days after getting back from A Coruña. This year’s GUADEC was pretty great. One highlight was the bumper crop of interns’ lightning talks. In general, I’m a huge fan of the lightning talk format, because good talks are just as good when they’re three minutes long, and bad talks are only three minutes long. In this session, I didn’t have to invoke that second clause: the quality was really consistently high, the speakers had prepared well, and the talks kept me interested for the duration. Change-overs were smooth, and a few truncated-slide hiccups didn’t trip anyone up. It’s great to see so many people excited about contributing in all manner of ways. Congratulations all round.

Michael Meeks informed and amused ((slide 35 is a highlight)) as ever. Discussion about Telepathy’s historically patchy support for IRC during the Empathy BOF pushed me into a drive-by release of the IRC backend. Adam Dingle and Jim Nelson’s keynote also stood out—free software business models are a tricky matter, and it was interesting to hear their thoughts on sustaining the dream. I learnt a lot from Owen’s talk on smooth animations, and particularly enjoyed the un-dramatic reveal in Neil and Robert’s talk on Wayland-ifying the Shell, where they switched Pinpoint out of fullscreen to reveal their demo: an apparently-unremarkable Gnome Shell running both X and Wayland applications, including the presentation itself. 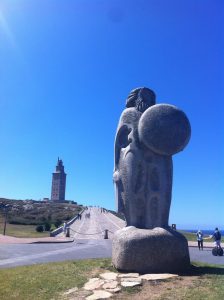 Outside the conference itself, my poor scheduling meant I missed the GNOME OS BOF, to my chagrin, in favour of spending a beautiful day exploring A Coruña. I fell into my usual trap of trying to visit museums on Monday (when they are generally closed), but the Torre de Hércules happened to be both open and free ((how appropriate)). Well worth a visit, if you’re ever there.

For me, chatting to old and new friends about GNOME, music, and everything in between are the best part of GUADEC, and this year was no exception. ((We didn’t have an official party this time around, but the nightly Collabora beach party welcomed many wonderful people, including tens of colleagues I rarely get the opportunity to see in person.)) Of course, over the week I also saw a lot of Pulpo a la Gallega. I felt a bit like this cat in the third panel.