Bustle 0.7.1 is out now and supports monitoring the system bus, without requiring any prior system configuration. It also lets you monitor any other bus by providing its address, which I’ve already used to spy on ibus traffic. 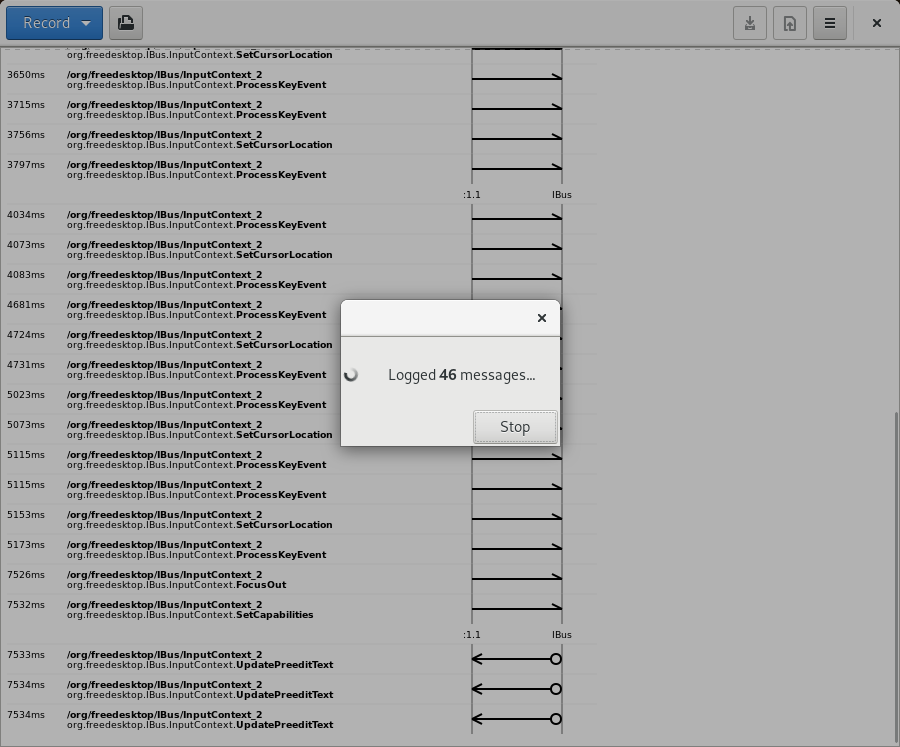 Bustle used to try to intercept all messages by adding one match rule per message type, with the eavesdrop=true flag set. This is how dbus-monitor also worked when Bustle was created. This works okay on the session bus, but for obvious reasons, a regular user being able to snoop on all messages on the system bus would be undesirable; even if you were root, you had to edit the policy to allow you to do this. So, the Bustle UI didn’t have any facility for monitoring the system bus; instead, the web page had some poorly-specified instructions suggesting you remove all restrictive policies from the system bus, reboot, do your monitoring, then reimpose the security policies. Not very stetic!

D-Bus 1.5.6 ((or version 0.18 of the spec if you’re into that)) added a BecomeMonitor method explicitly designed for debugging tools: if the bus considers you privileged enough, it will send you a copy of every future message that passes through the bus until you disconnect. Privileged enough is technically implementation defined; the reference implementation is that if you are root, or have the same UID as the bus itself, you can become a monitor. 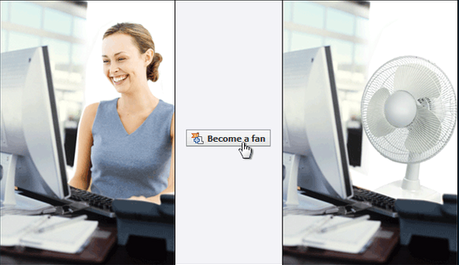 Bustle, which runs as a regular user, needs to outsource the task of monitoring the system bus to some other privileged process. The normal way to do this kind of thing – as used by tools like sysprof – is to have a system service which runs as root and uses polkit to determine whether to allow the request. The D-Bus daemon itself is not about to talk to polkit (itself a D-Bus service), though, and when distributed with Flatpak it’s not possible for Bustle to install its own system service.

I decided to cheat and assume that pkexec – the polkit equivalent of sudo – and dbus-monitor are both installed on the host system. A few years ago, dbus-monitor grew the ability to dump out raw D-Bus messages in pcap format, which by pure coincidence is the on-disk format Bustle uses. So Bustle builds a command line as follows:

It launches this subprocess, then reads the stream of messages from its stdout. In the system bus case, polkit will prompt the user to authenticate and approve the action: 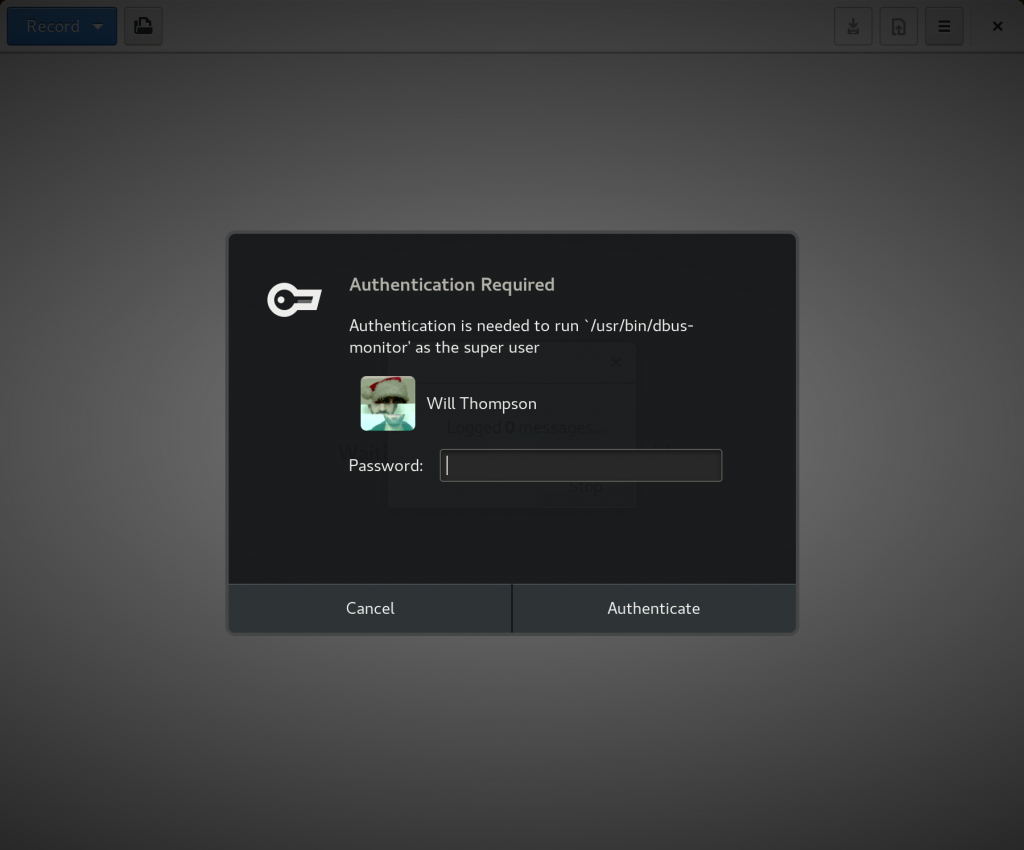 Assuming you authenticate successfully, the messages will flow: 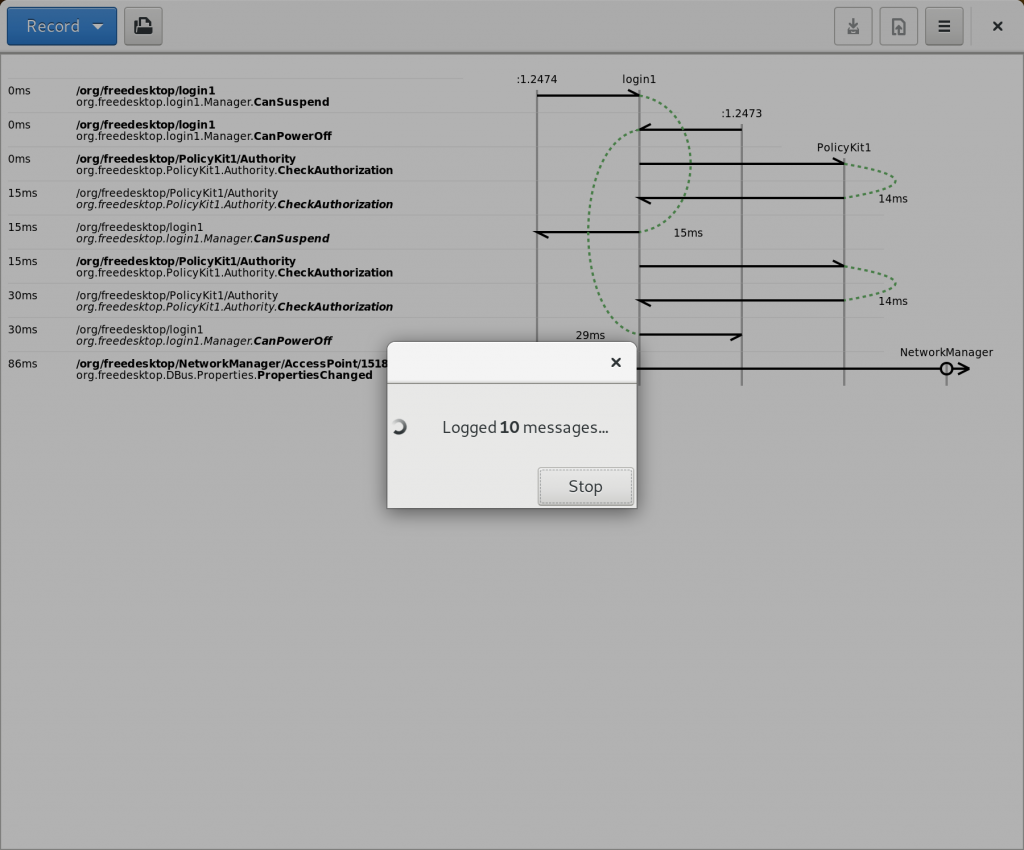 There are a few more fiddly details:

On the one hand, I’m pleased with this technique, because it allows me to implement a feature I’ve wanted Bustle to have since I started it in 2008(!). On the other hand, this isn’t going to cut it in the general case of a Flatpaked development tool like sysprof, which needs a system helper but can’t reasonably assume that it’s already installed on the host system. Of course there’s nothing to stop you doing something like flatpak-spawn --host pkexec flatpak run --command=my-system-helper com.example.MyApp ... I suppose…