It was a bit quiet around Fragments, many had the fear that Fragments will no longer be maintained.

These rumors I can proudly counter, and can now announce that Fragments 2.0 is now available after about a year of development! 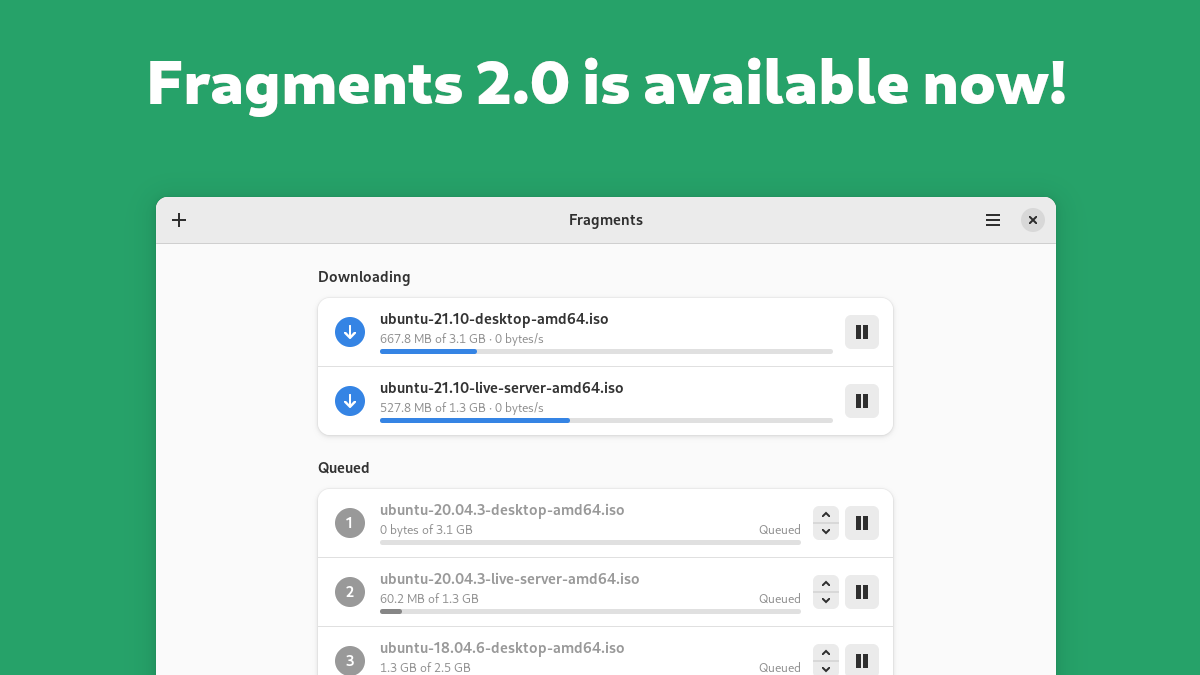 Until recently Fragments was written in Vala, and used libtransmission as a backend. This had some disadvantages, e.g. a vapi file has to be maintained (the glue between the Transmission C API, and the Fragments Vala code).

In addition to that there are considerations from the Transmission maintainers to replace the C API with C++. This would mean that Fragments would not be able to use the Transmission API without creating (and maintaining) another wrapper (C++ -> C). In the long run I didn’t think this was very realistic.

And to be honest, Fragments was my last Vala application, and I was thinking for a long time how I could replace it with Rust 😉

After a few brainstorming sessions I came up with the idea to continue using Transmission, but not via the C API, but to use transmission-daemon, and then communicate via its HTTP RPC API. This has several advantages:

I needed to create a new client that would allow me to communicate with the Transmission RPC API. This was fortunately not a huge challenge in Rust thanks to serde-json. To keep this abstraction consistent, I decided not to develop this client in-tree within the Fragments source code, but to publish it as a separate crate on crates.io: transmission-client

This crate takes care of RPC communication only, and can therefore be easily reused in other Rust apps. However, from a Fragments perspective, it would be beneficial if I would be able to use the Transmission API using the GObject type system. So I decided to develop a second crate: transmission-gobject. This wraps the API of the first crate into gtk-rs gobjects. This has the advantage that I can easily embed the transmission data in the Fragments interface, because everything is available as a object with properties, and models. I could therefore concentrate on the pure application in Fragments and didn’t have to worry about technical aspects of the BitTorrent backend.

To visualize the whole thing: 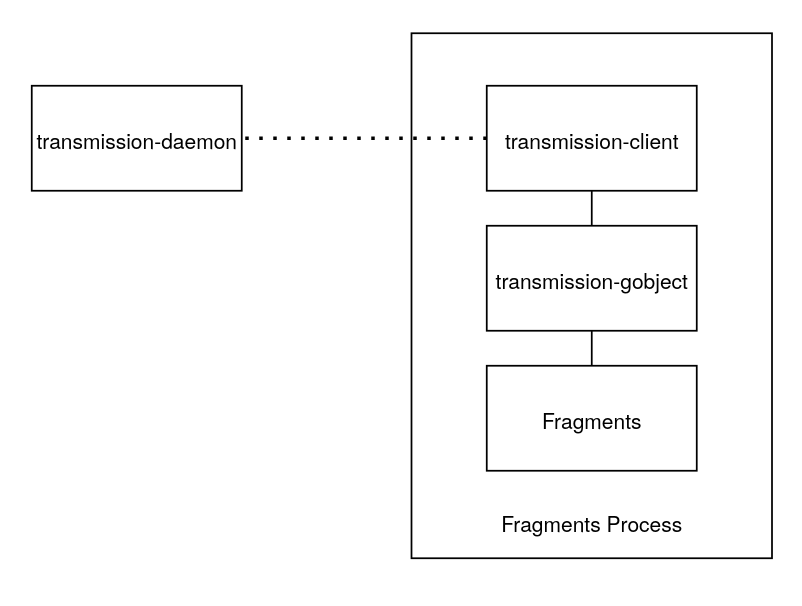 When starting Fragments, the transmission-daemon process also gets started automatically in the background.

Due to the strict abstraction on the network level, there is a big advantage: It does not matter if Fragments connects to its “own” transmission-daemon, or if it connects to a remote transmission server. Likewise, Fragments can be used to remotely control another Fragments session.

For example, I have Transmission installed on my Synology NAS, and use it as a “download server”. I can now connect to it directly from within Fragments:

It is also possible to switch between the individual “connections” directly within the app:

Of course there are a lot of other new features:

Fragments 2.0 can be downloaded and installed from Flathub now!

I would like to thank Maximiliano and Chris, both helped me a lot with the Rust + GTK4 port, and Tobias who helped me with the updated design!

I have been following the “This Week in Matrix” blog series with great interest for some time now, and wondered: “Why isn’t there something like this for GNOME?”
To summarize the principle in a few words: A short, weekly summary in which maintainers briefly announce what they worked on for the past week.

For example, the following may be included in a weekly summary:

After discussing the idea with other GNOME members, and agreeing that this is an idea with great potential, I started to implement the necessary technical requirements. We ran it as an experiment with a reduced set of maintainers. Here is our very first issue!

➞ This Week in GNOME: #1 Scrolling in the Dark 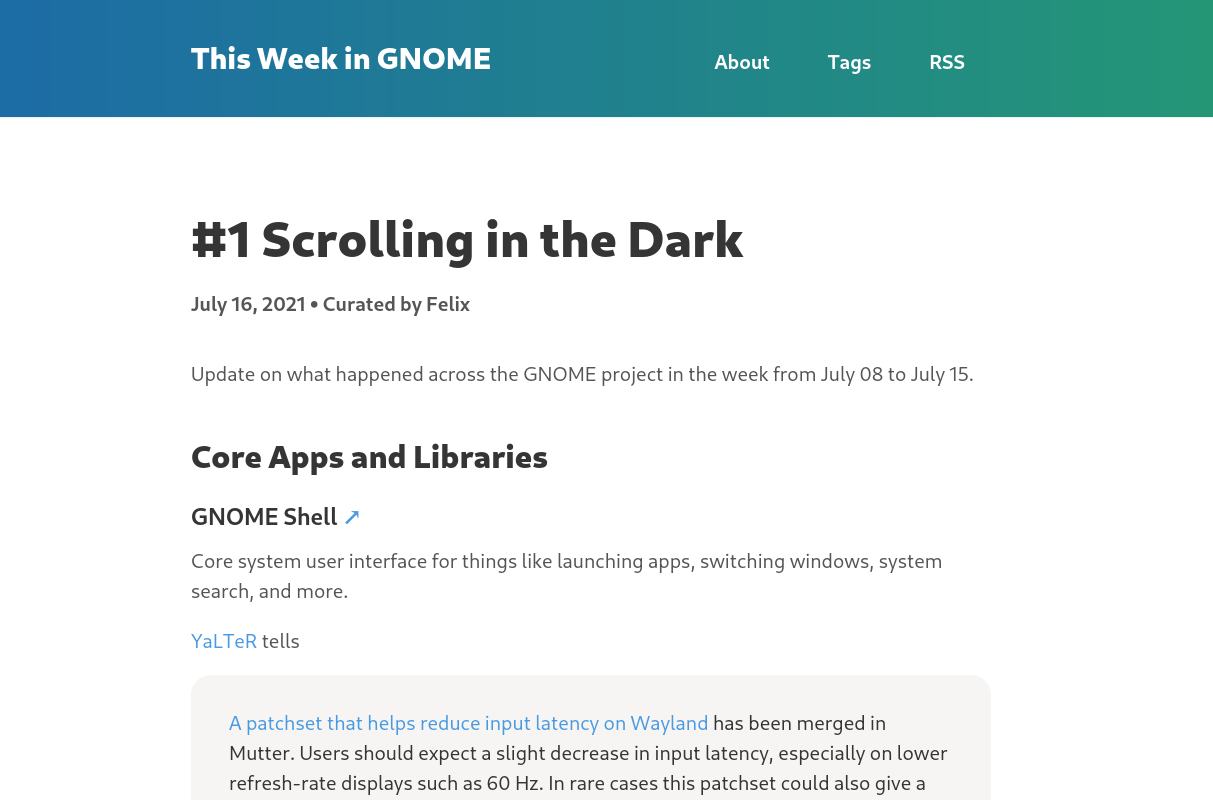 Read through the blog post – it’s full of exciting news, and that’s just the beginning!

A user sends a message in the TWIG matrix room, mentioning the bot at the beginning of the message:

The bot will automatically recognize this message, and save it. In order for this message to appear in the next summary, it must be approved by an editor. This is done by adding the “⭕️” emoji (only editors have this permission). 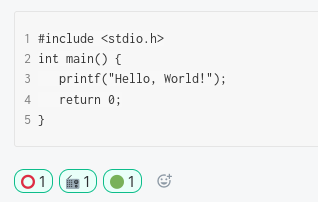 In this example I have done the following

When a week has passed, an editor will create a new summary: this is a list of all the pieces people have been reporting since the last summary. To issue it, an editors runs the “!render-file” command in the administration room.

All collected messages with related information will be summarized in a markdown document. This can be used to create a new blog post using Hugo for example.

The message shown above would result in the following (raw markdown preview using Apostrophe): 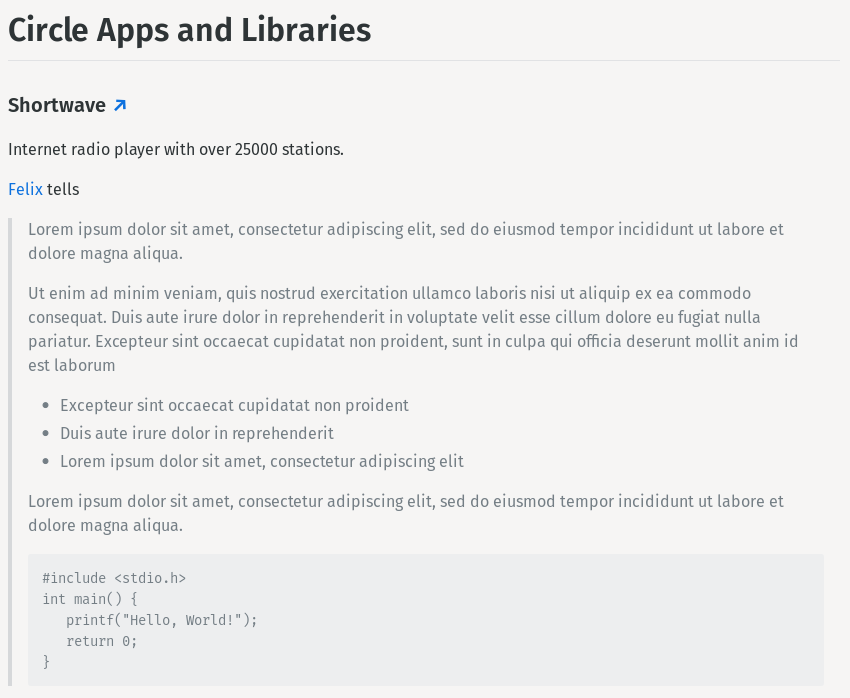 The technical basis for this is hebbot – a matrix bot I developed in Rust using the matrix-rust-sdk. I tried to make this bot as generic and adaptable as possible, so that other communities can reuse it.

There have already been failed attempts to do monthly summaries, so why should it work with a weekly rhythm?

There are several reasons why it is very difficult to publish a monthly summary blog in the long term:

TWIG has the following advantages here:

Let’s show the world together what we do!

I’ve been involved in the GNOME project for quite some time now, and can say from personal experience that an outsider has absolutely no idea how much valuable work is being done behind the scenes.

Let us know what you’re working on, what cool feature you have released, or what bugs you have fixed! Join #thisweek:gnome.org and drop a message, we’ll do the rest!

Ten months later, after 14.330 added and 8.634 deleted lines, Shortwave 2.0 is available! It sports new features, and comes with the well known improvements, and bugfixes as always. 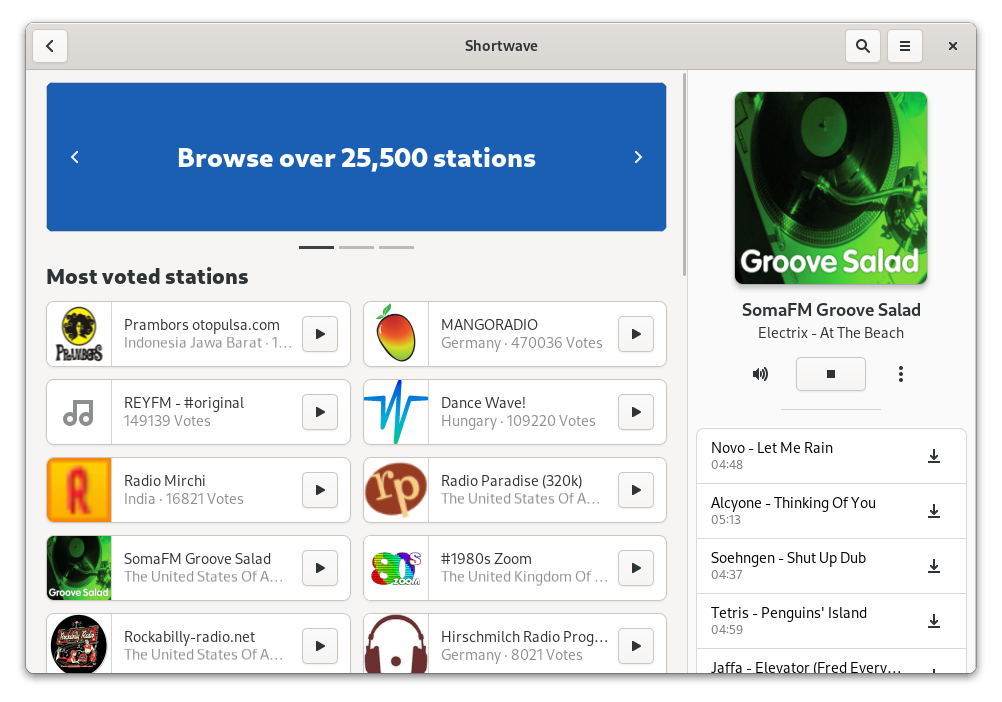 The user interface got ported from GTK3 to GTK4. During this process, many elements were improved or recreated from scratch. For example the station detail dialog window got completely overhauled: 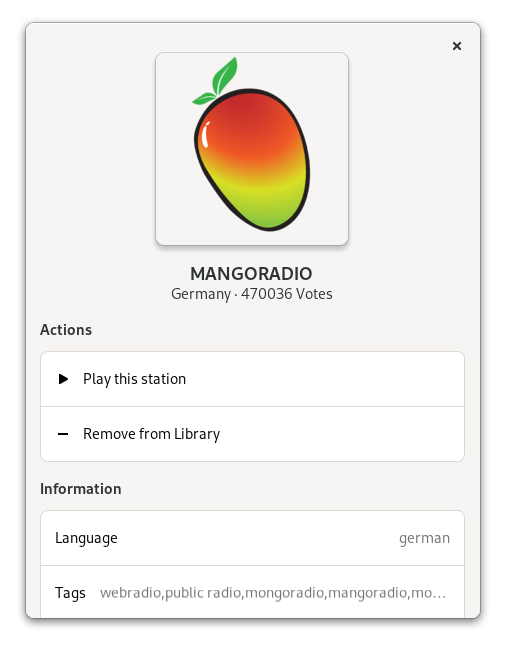 Huge thanks to Maximiliano, who did the initial port to GTK4!

Adaptive interface – taken to the next level

Shortwave has always been designed to handle any screen size from the beginning. In version 2.0 we have been able to improve this even further. There is now a compact mini player for desktop screens. This still offers access to the most important functions in a tiny window.

Today, after nearly two years of development I’m very proud to say: The first stable version of Shortwave is now available! I have put a lot of time and effort into this project, now it is finally time to make it available for everyone :-).

Shortwave is an internet radio player that provides access to a station database with over 25,000 stations. 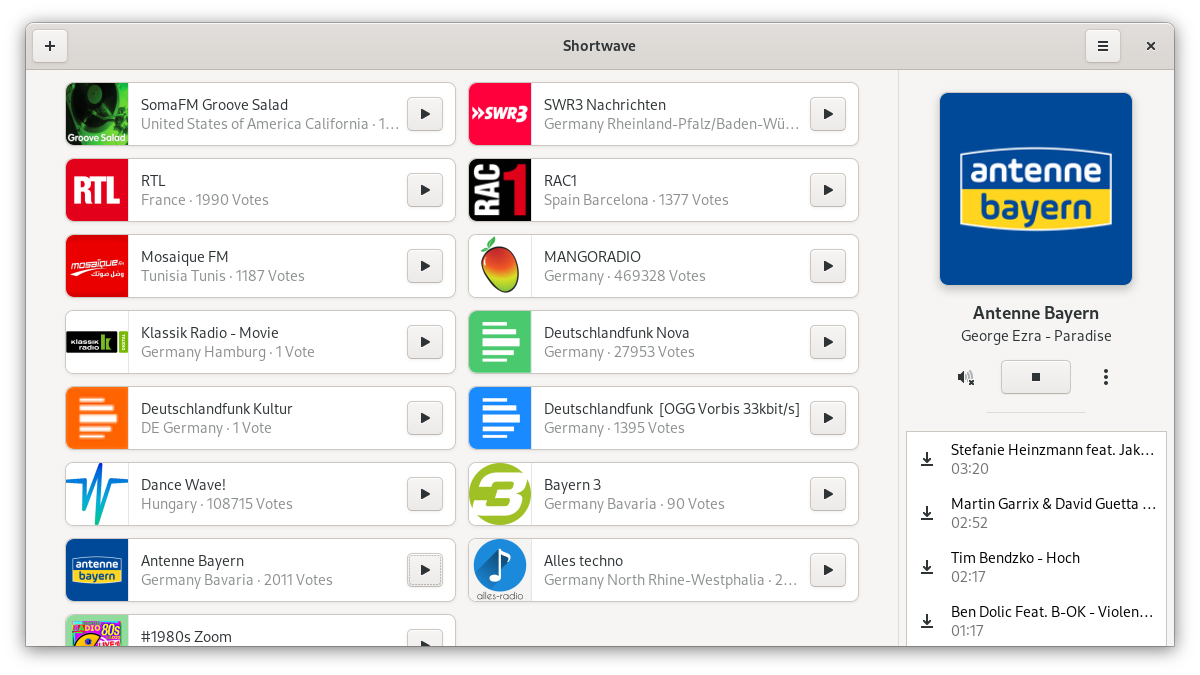 When a station is being played, everything gets automatically recorded in the background. You hear a song you like? No problem, you can save the song afterwards and play it with your favorite music player. Songs are automatically detected based on the stream metadata. 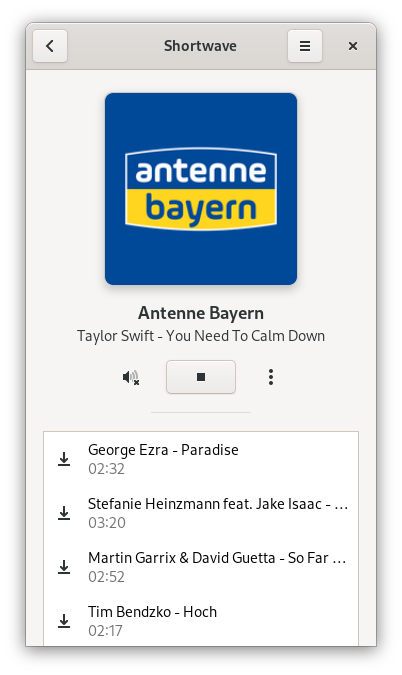 It’s possible to stream the audio playback to a network device, which implements the Google Cast protocol (e.g. Chromecast). So you can easily listen to your favorite stations e.g. from a TV. 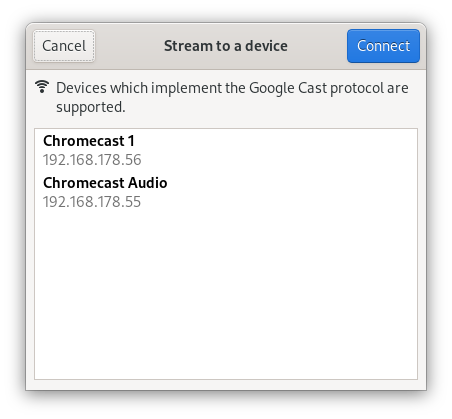 The interface of Shortwave is completely adaptive and adapts to all screen sizes. So you can use it on the desktop, but also on your Linux (not Android!) based smartphone.

Shortwave uses the internet service radio-browser.info as station database. It contains more than 25,000 stations. This ensures that you will find every radio station, whether a known or an exotic one. 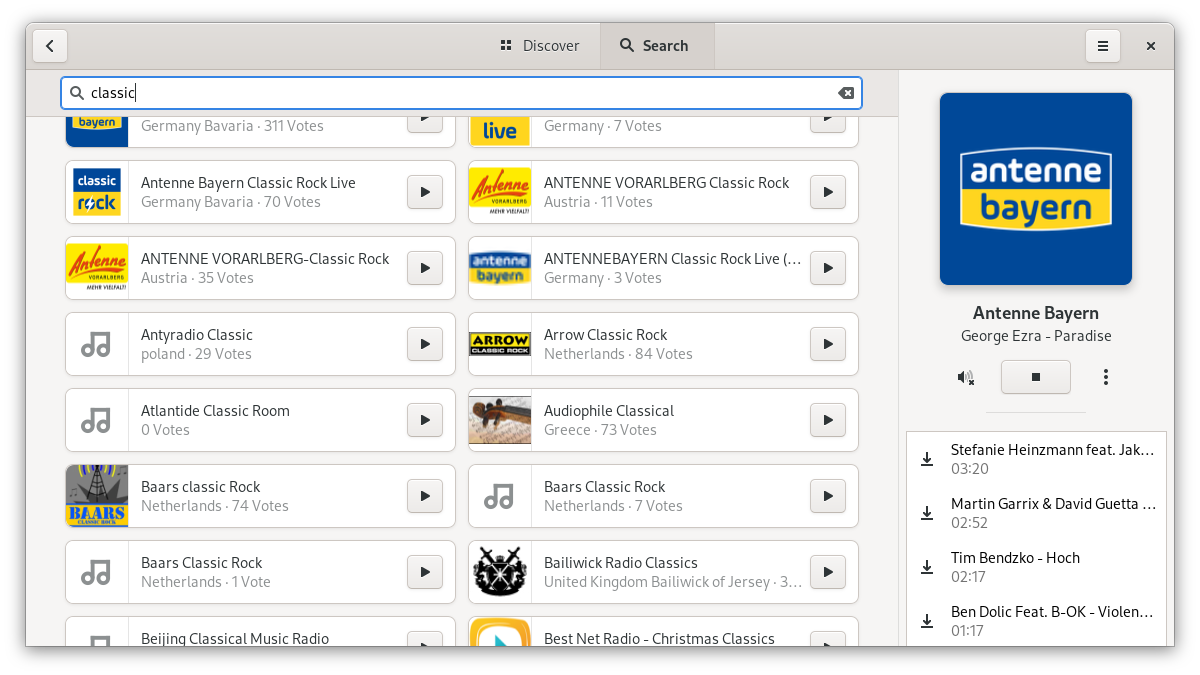 Shortwave integrates into the GNOME Shell, by providing a MPRIS applet and a proper PulseAudio implementation. 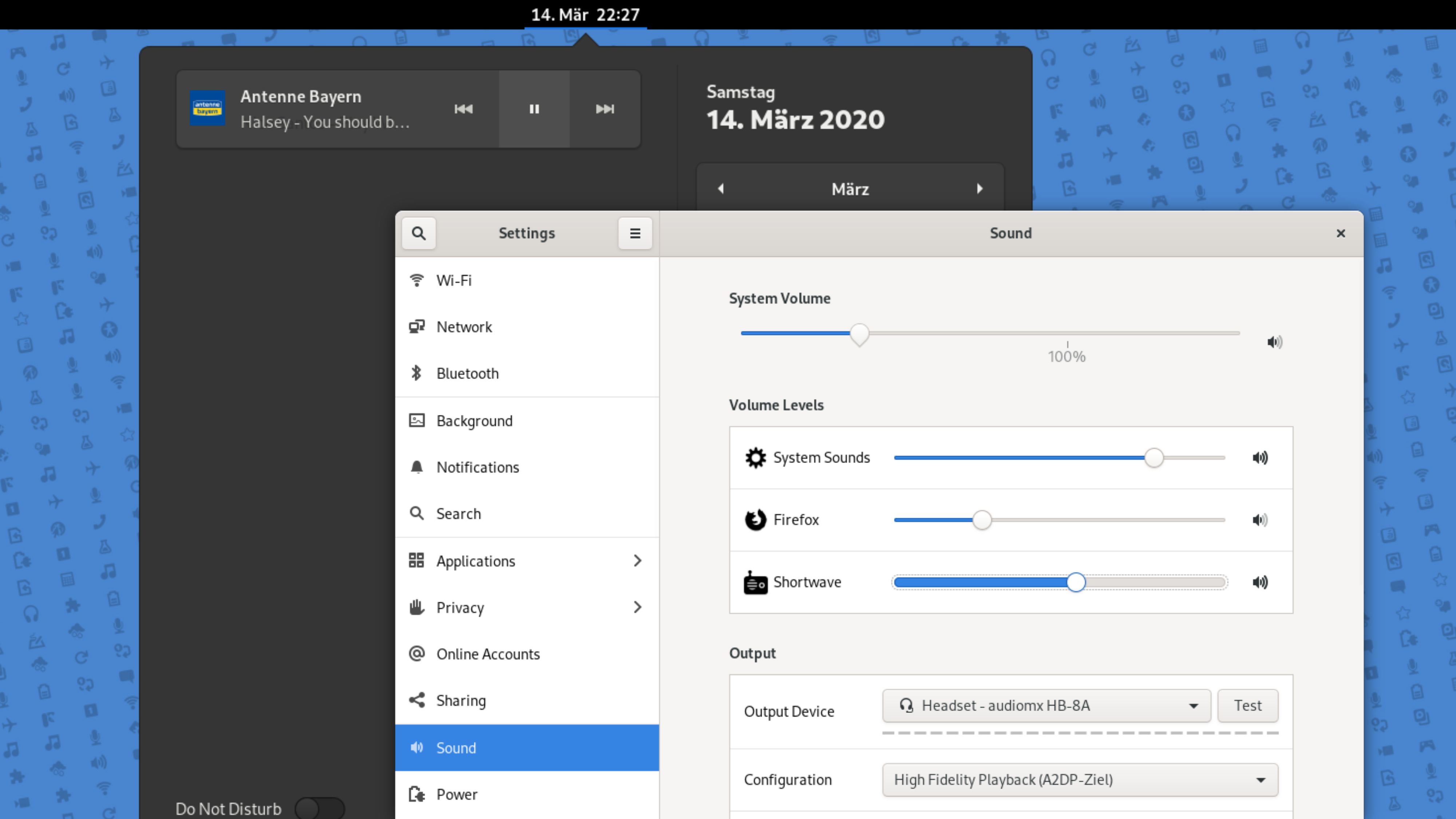 … is definitely dead now. But don’t worry, you can migrate the data easily to Shortwave.

Or install it with:

Have fun with it! And many thanks to all who supported me during the development. Especially the fabulous GNOME Podcasts team 🙂

Today I can finally announce the second Shortwave Beta release! I planned to release it earlier, but unfortunately the last few weeks were a bit busy for me.

You can download the latest beta release from Flathub (Beta)! Please test it extensively and report all issues!

Or just click here to install it. You can find the project page here.

Shortwave is an internet radio player that lets you search for stations, listen to them and record songs automatically. 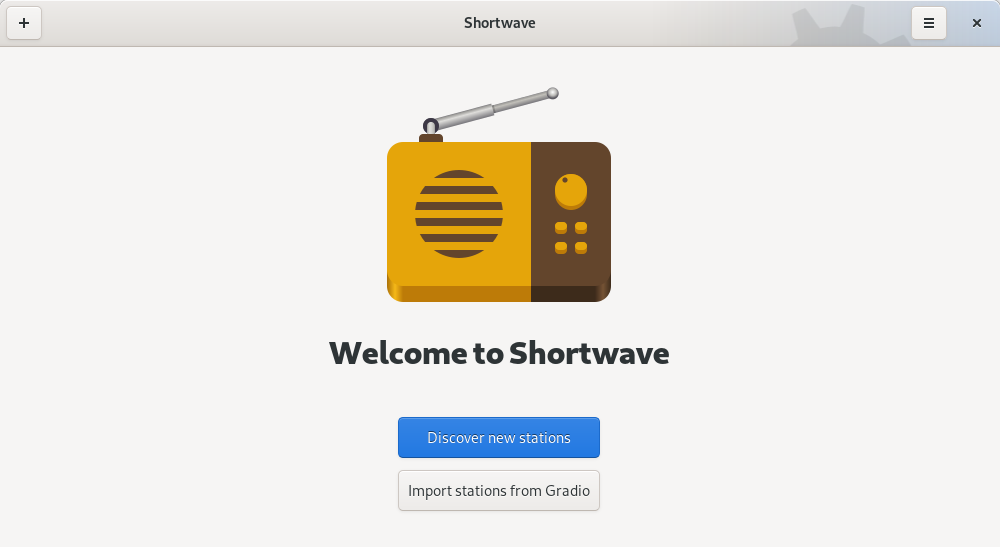 When a station is being played, everything gets automatically recorded in the background. You hear a song you like? No problem, you can save the song afterwards and play it with your favorite music player. Songs are automatically detected based on the stream metadata.

The interface of Shortwave is completely adaptive and adapts to all screen sizes. So you can use it on the desktop, but also on your Linux (not Android!) based smartphone. For this Shortwave uses the awesome libhandy library!

It’s possible to stream the audio playback to a network device, which implements the Google Cast protocol (e.g. Chromecast). So you can easily listen to your favorite stations e.g. from a TV. 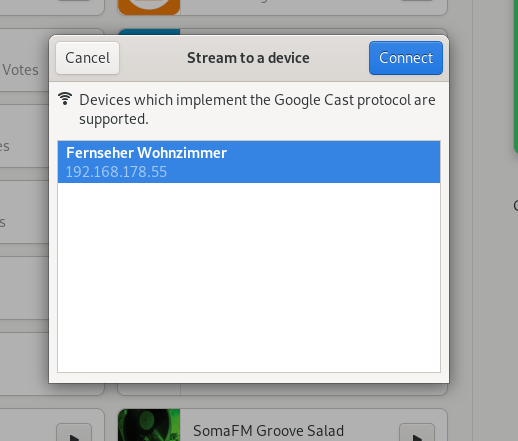 Shortwave uses the internet service radio-browser.info as station database. It contains more than 25,000 stations. This ensures that you will find every radio station, whether a known or an exotic one. And if something is really missing, you can add your station here. 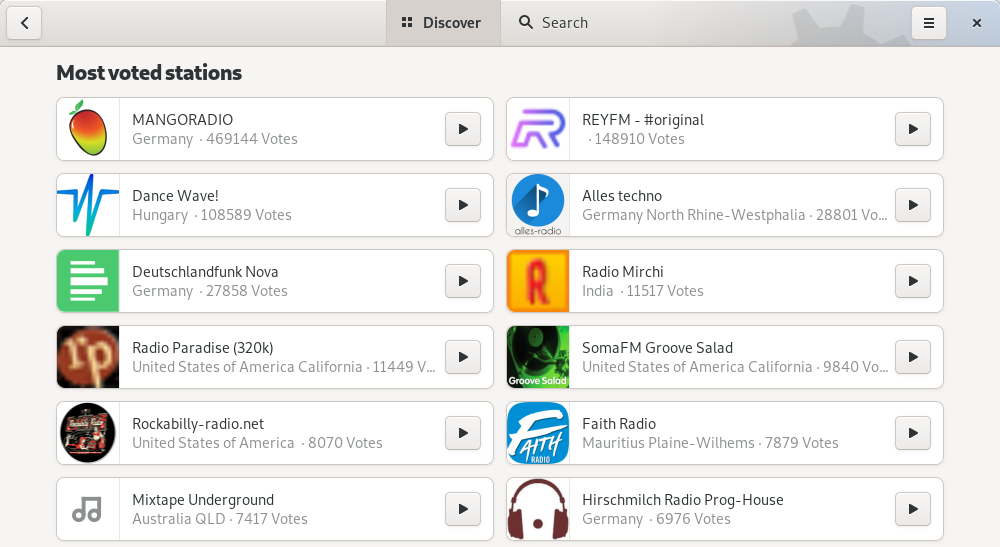 Where can I get it?

This is the first beta version of Shortwave. All basic features should work, but issues can appear. If somethings is wrong, please open a issue report here!

You can get it from Flathub (Beta). Install it with

Fragments 1.4 is now available on Flathub! It comes with a new icon, an improved theme, and many minor improvements and bug fixes. 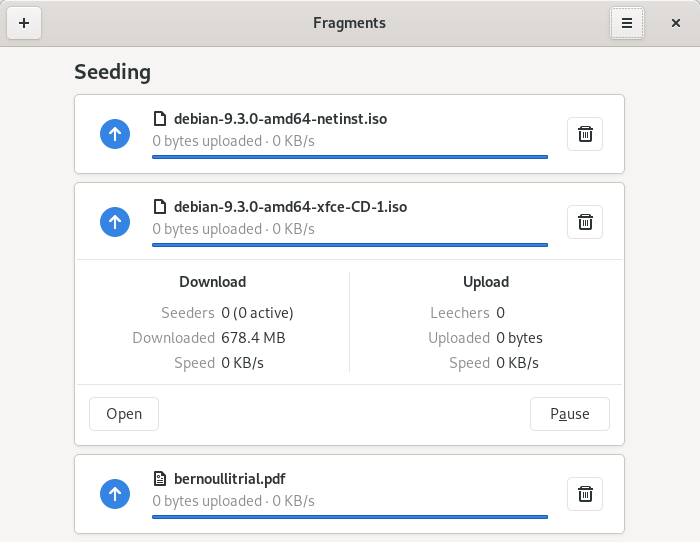 Get it from Flathub