In the last two weeks I have been working on the user account settings for Fractal. I can’t wait to get to the point where Fractal will work stand-alone without needing to use Riot for certain things, and getting complete account settings is a major step in that direction.

Let’s start with the status of Fractal before I started my task. The only thing Fractal did was loading the display name and the avatar, and they couldn’t even be changed.

Tobias had made mockups for the account settings last fall, but they did not contain all the necessary features and was never fully implemented. During the Strasbourg hackfest we started discussing a more complete design. Since then we’ve been expanding on that work, which led us to the current design: 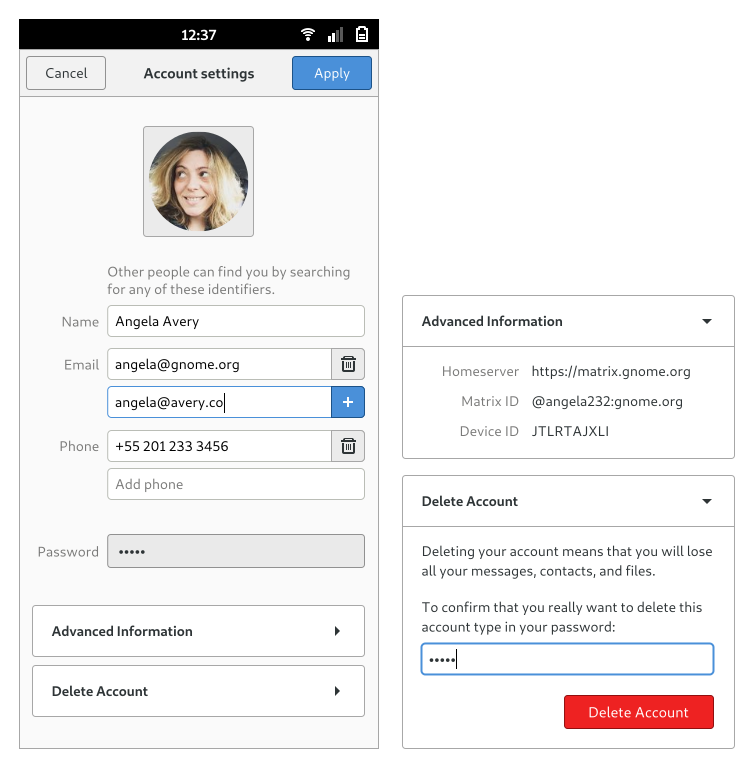 I started creating the UI file which describes the view. I tried to focus just on the UI, in order to not overcomplicate my process. The first thing was just a dialog with all widgets without any behavior.
The second step was to add all information already available in Fractal, like homeserver, MXID, avatar, and display name.

Until this point the implementation was quite easy because it was mostly GTK code, which I’m quite familiar with.
However, up until two weeks ago I had never touched the fractal-api code, so the rest was trickier. Most APIs, e.g. setting the avatar, are quite easy to implement. The most complicated are the calls made for handling third party identifiers (https://matrix.org/docs/spec/client_server/r0.3.0.html#adding-account-administrative-contact-information) (email addresses and phone numbers). It is not only about setting the new identifier, but the client has also the request a token to make sure the user is the owner of the email address.

The user can now change the following settings: Avatar, display name, add and remove email addresses and phone numbers. Also, they can see the homeserver and their own MXID.
I already added all the API calls except for the calls needed for account destruction. Over the next few days I will finish up the last missing things.

Tobias and I talked about moving the account settings from a dialog to the main window, and removing the apply button, since the process for adding emails addresses needs a separate conformation (because it requires that the user goes to their email inbox). Also, for changing the password the user would have to confirm their changes twice, which doesn’t make much sense. We will probably make some more small changes on the way to make the UX as good as we possibly can.

I’m working on issue #21 and this is my WIP branch.

One thought on “Fractal GSoC Progress”