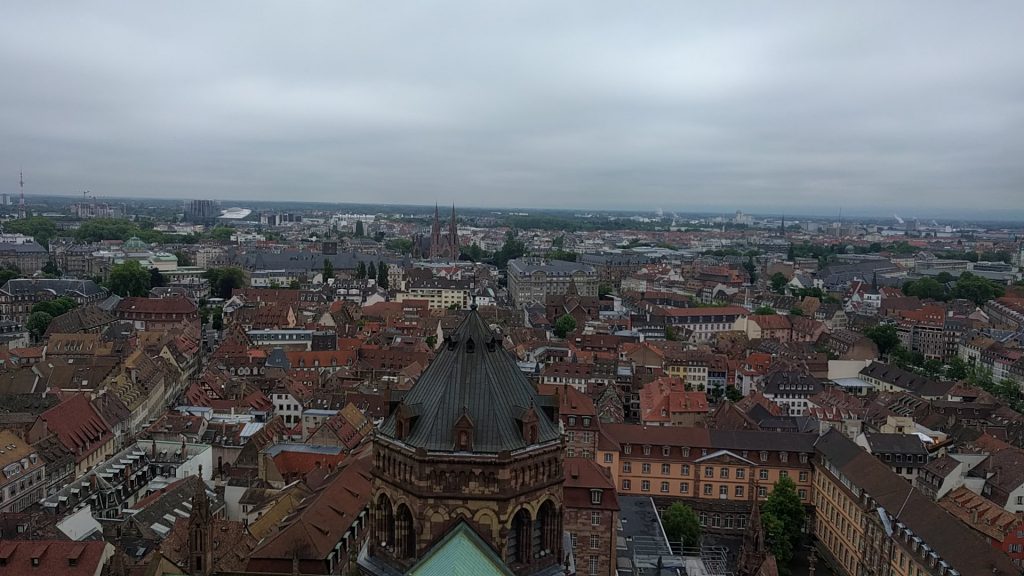 The last couple of days I was in Strasbourg for the Fractal Hackfest. We made some fundamental decisions for the future of Fractal, our Matrix client.  We also decided on some basic architectural changes we want to make.

You probably already read about the split of Fractal into two separate apps, to cover two different use cases: Barbecue and Banquet. Barbecue will mostly cover “one to one” chats and Banquet high-traffic group chats and IRC-like rooms. We are certain that the split is the right direction for Fractal, but we didn’t define the exact split between the apps.

Before we can start working on the two different apps we need to refactor the code. Currently Fractal is structured in two parts: fractal-api and fractal-gtk. The first one is a library which handles all the communication with Matrix. The other part contains all logic and UI. The first big task will be to nicely separate the logic from the UI, so that the code can be shared between the apps and have just few different UI elements, to better fit each use case. We talked about a lot of things and Daniel and Tobias have written some really good posts to sum up the event, therefore I won’t go into every detail in this post. 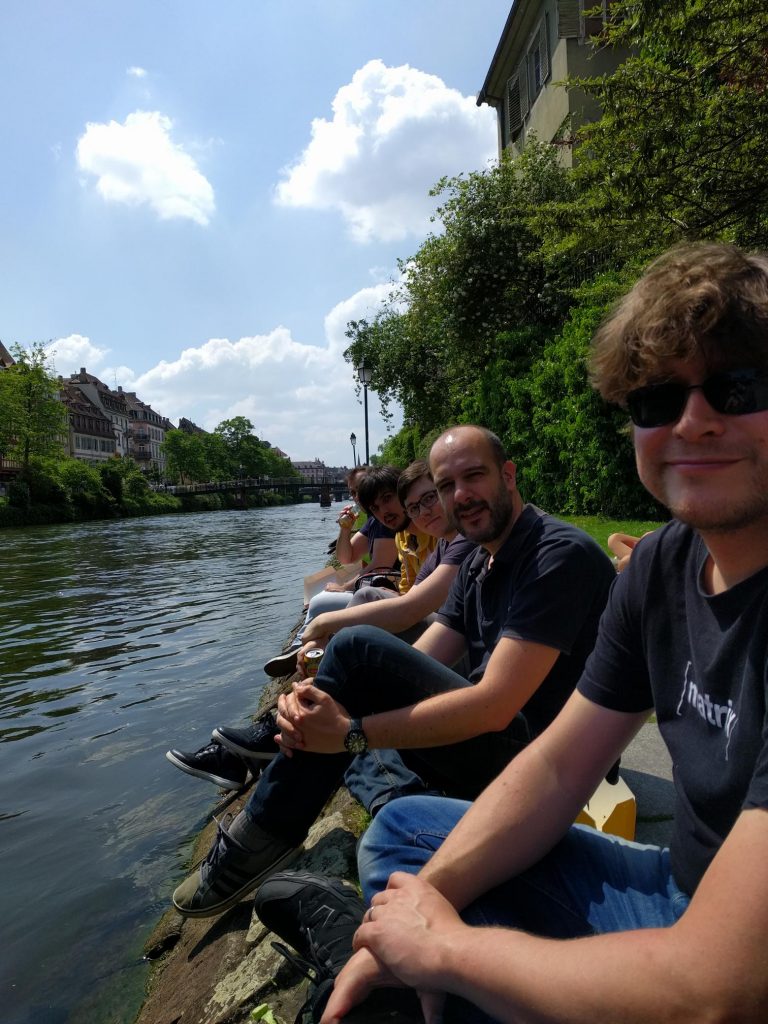 This picture is from a lunch break. We got our food from different restaurants and ate all together. This was my first hackfest, and I had a lot of fun, I definitely loved the city and made new friends.

During the train ride to Strasbourg I did some hacking. I worked on a patch for the gtk emoji chooser, which on many systems looks quite broken: 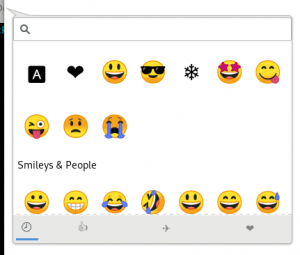 After my changes the popover will look like this: 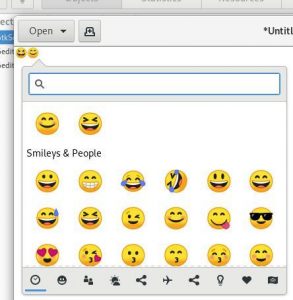 I already opened a merge request to GTK. We are still discussing a few things but I hope it will be merged soon.

I also worked on the integration of spell check into Fractal. I will use gspell, an integration for spellcheck for GTK applications, also used by Gedit. The first step was to create gspell Rust bindings, but I will write a different post on that and how to create Rust bindings with GIR. For now, here’s a basic demonstration of the working gspell-rs bindings:

I didn’t only code and work on Fractal, but I also a got to do a little bit of sightseeing. The last day (Monday) was completely different than the previous days, since everybody had to leave and we hadn’t planned any thing for it. I visited the cathedral, from inside and I also climbed the top to see the panorama of Strasbourg. For lunch we, the remaining people, ate at a local restaurant. On the menu was limitless Flamenkuchen, with close to 1 liter of beer for each of us. 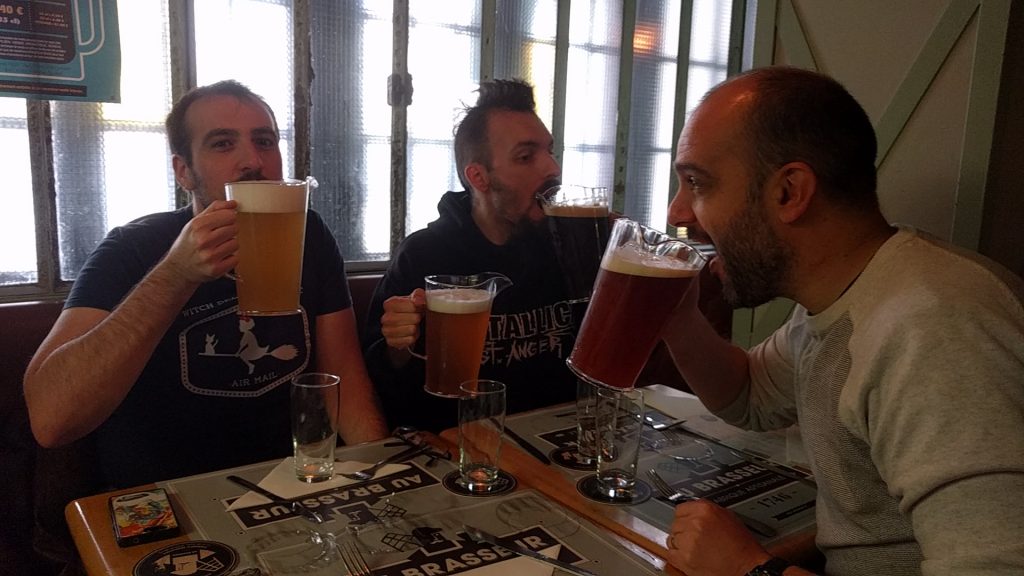 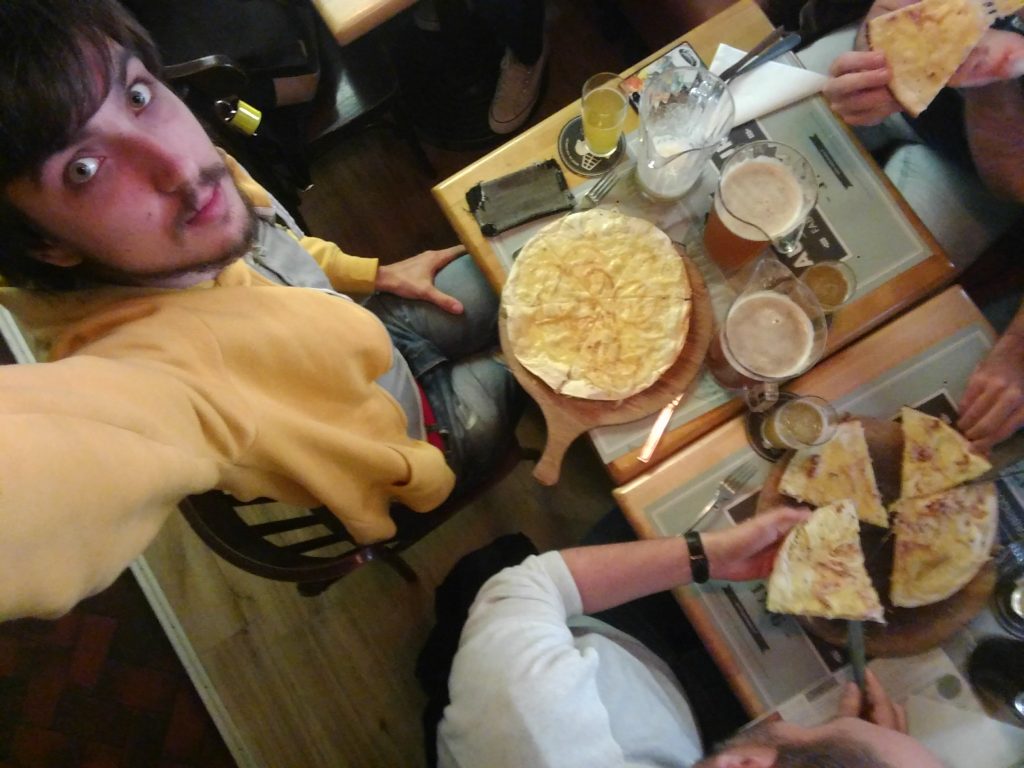 Many people already know I got accepted as a student to GSoC. It was really nice to meet my mentor, Daniel and also Eisha, the other student working on Fractal. Now I can connect the Matrix ID to a real person, which makes interaction with them much easier online. I guess this Hackfest was a really nice conclusion for the community bonding period and a good start for GSoC. 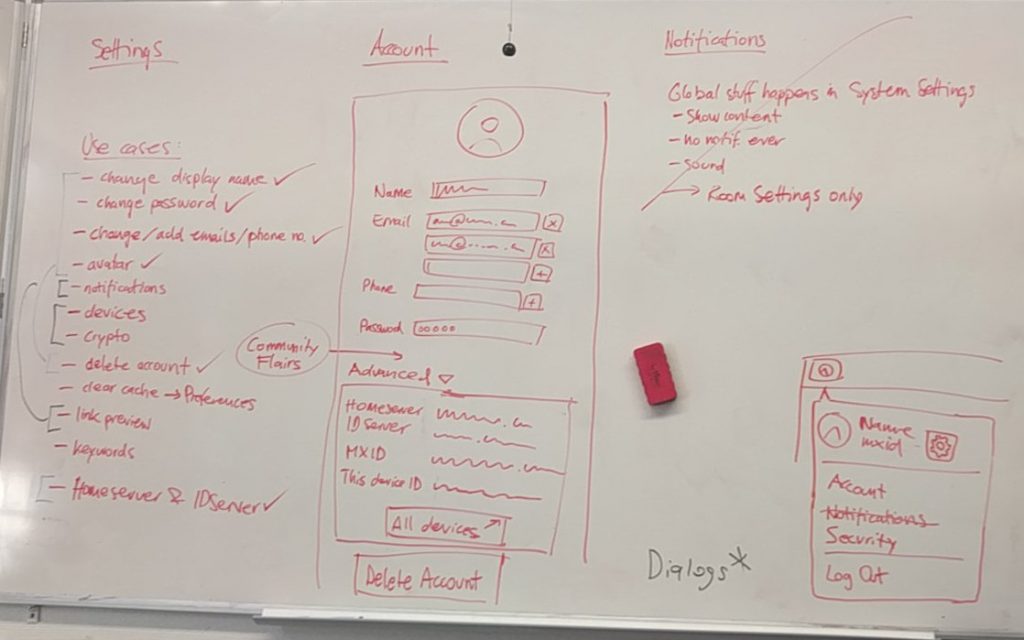 The time in Strasbourg was limited therefore we didn’t have much time to define all of the tasks for the summer.  But I will be starting to work on the User Account Settings for this week. Also the spell checking is one of my proposed GSoC tasks, so I’m already ahead of my planned schedule. I definitely won’t have trouble finding more tasks though 🙂 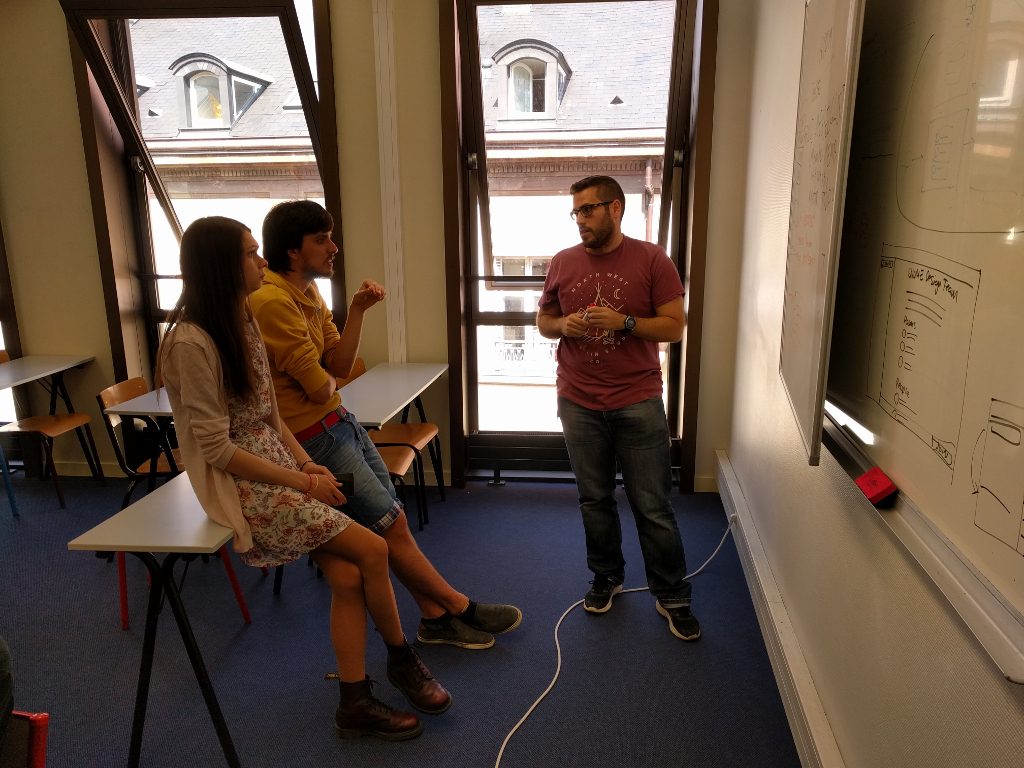 Thanks to the GNOME Foundation and Purism for making it possible for me to attend this hackfest. GNOME sponsored my trip to and from Strasbourg, and Purism paid for my accomodation (I shared a room with Tobias). The location was awesome, and the city was perfect for a hackfest, I am so glad I have been there. I would also like to thank everyone who organized and helped make the event happen. I think it was a big success and this is one of the reasons I love the GNOME community so much.

The other day I worked on improving the auto-scroll in Fractal (a super cool GTK+ Matrix Client). While doing this I discovered some nice features in GTK+.

Scrolling the view automatically (e.g. by pressing a button) is quite easy, you just need to set the value of vadjustment or hadjustment and then the view jumps to the new value.
This code moves the view to the bottom (yes, it’s Rust 😎):

View contains our ScrolledWindow and upper – page_size is the bottom of our view.

Awesome! We are done here!

But wait! What if we want to have a fancy animation, without the sudden jump? That’s exactly what we wanted in Fractal.

Let’s look at how we can add the smooth animation between the starting point and the end point.

The idea behind this is to update the position of the ScrolledWindow gradually instead of all at once. GTK provides us with a pulse to animate the state change, called tick. So we need to increase the value of the adjustment at each “tick”. A tick is fired every time GTK draws a new frame, so we don’t need to think about keeping in sync with the frame rate. For attaching a callback to the tick we use the function add_tick_callback(). We need also the frame clock, the start “tick”. We get the the clock with get_frame_clock(). This allows us to define the length of the animation, because the end of the transition will be start_clock + animation_duration. Now all we need is to calculate the position of the view at each “tick”.

This code snippet is inspired by the GTK+ source code. It moves a ScrolledWindow to the end of the view and could be adapted to scroll automatically (with an animation) to any point:

This code is from Fractal. The complete commit can be found here. I really hope that this post saves somebody from reading the GTK+ source code like I had to do, to figure out how to animate a simple ScrolledWindow 🙂

Last weekend I was in Brussels for FOSDEM, a super awesome conference about free and open source software. Since my first year, three years ago, a few things have changed. This year I went as a speaker and I brought with me a talk about my experience writing Teleport, my first GTK+ application. I really hope I could motivate somebody to start their own project. Also, in the past year my relationship to free software has changed, from just being a user and advocate to an active contributor (primarily to the GNOME Project).

I stayed in Brussels an entire week to save some money on the travel costs and visit Brussels. I ended up staying inside most of the time though, not only to escape the cold and rainy weather, but also because I get super motivated at conferences to work on projects. I mostly worked on the implementation of the redesign of the background settings panel for GNOME, and I really hope we can still get it into GNOME 3.28 (fingers crossed!). In order to build the background panel I had to use jhbuild for the first time, and I had to learn it quickly because I had to finish the patch. So I spent a lot of time getting jhbuild running, while already preparing the talk in my head and going to social dinners and beer events, which was a bit much at times 😉

On Sunday I helped out at the GNOME booth. Luckily in the beginning there where not too many people, most likely they had a hard time getting up after the GNOME beer event the night before 😀
Therefore I had time to get comfortable at the booth and to learn what I needed to do.

As my talk got closer I got more and more nervous, but at least the previous days I was really calm about it. My talk was at 4 pm on Sunday in the Open Source Design devroom. It went well, except for a pretty bad case of the demo effect: The demo didn’t work on the first try, then my touchpad suddenly stopped working, and the entire time the projector was set at a resolution that cut off part of the slides :/

The most important thing I learned this year at FOSDEM (tip for all FOSDEM attendees) was to buy a “MOBIB Basic” card for 5 Euros and charge it with “10 journeys JUMP”s. This is much cheaper than buying single journey tickets, and it can even be used by more than one person at the same time.

All in all I really loved the event. I made a lot of new experiences, met new people and had interesting conversations. I’m already excited to come back to Brussels next year!