Overview of the VP9 video codec

When I first looked into video codecs (back when VP8 was released), I imagined them being these insanely complex beasts that required multiple PhDs to understand. But as I quickly learned, video codecs are quite simple in concept. Now that VP9 is gaining support from major industry players (see supporting statements in December 2016 from Netflix and Viacom), I figured it’d be useful to explain how VP9 works.

Why we need video codecs

That new television that you’ve been dreaming of buying – with that fancy marketing term, UHD (ultra high-definition). In numbers, this is 3840×2160 pixels at 60 fps. Let’s assume it’s HDR, so 10 bits/component, at YUV-4:2:0 chroma subsampling. Your total uncompressed data rate is:

And since that would RIP your internet connection when watching your favourite internet stream, you need video compression.

A video stream consists of frames, and each frame consists of color planes. Most of us will be familiar with the RGB (red-green-blue) colorspace, but video typically uses the YUV (Y=luma/brightness, U/V=blue/red chroma difference) colorspace. What makes YUV attractive from a compression point-of-view is that most energy will be concentrated in the luma plane, which provides us with a focus point for our compression techniques. Also, since our eyes are less perceptive to color distortion than to brightness distortion, the chroma planes typically have a lower resolution. In YUV-4:2:0, the chroma planes have only half the width/height of the luma plane, so for 4K video (3840×2160), the chroma resolution is only 1920×1080 per plane:

VP9 also supports other chroma subsamplings, such as 4:2:2 and 4:4:4. Next, frames are sub-divided in blocks. For VP9, the base block size is 64×64 pixels (similar to HEVC). Older codecs (like VP8 or H.264) use 16×16 as base block size, which is one of the reasons they perform less well for high-resolution content. These blocks are the basic unit in which video codecs operate: 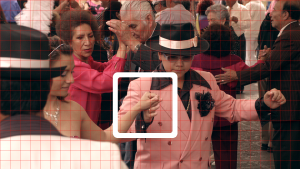 Now that the fundamentals are in place, let’s look closer at these 64×64 blocks. 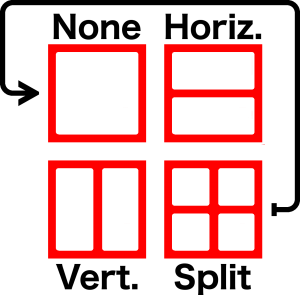 If you do this for the blocks we highlighted earlier, the full block decomposition partitioning (red) looks like this: 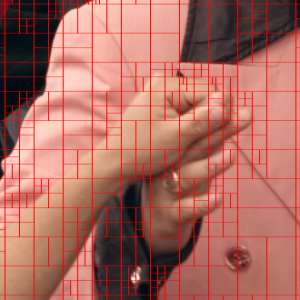 Next, each terminal block goes through the main block decoding process. First, a set of block elements are coded: 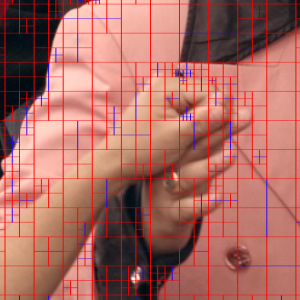 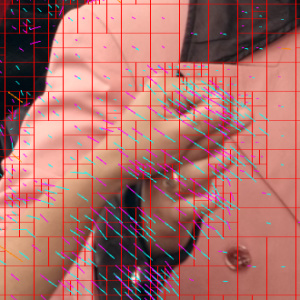 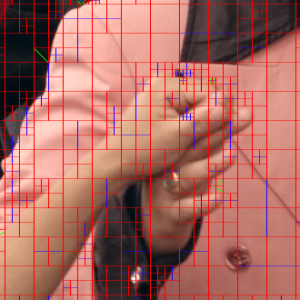 Lastly, the transformed coefficients are quantized to reduce the amount of data, which is what provides the lossy part of VP9 compression. As an example, the quantized, transformed residual of the image that we looked at earlier looks like this (contrast increased by ~10x): 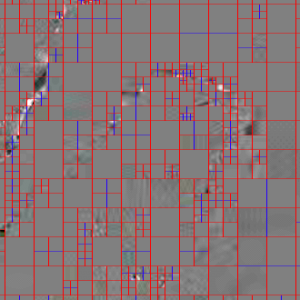 Coefficient arrays are coded into the bitstream using scan tables. The purpose of a transform is to concentrate energy in fewer significant coefficients (with quantization reducing the non-significant ones to zero or near-zero). Following from that, the purpose of scan tables is to find a path through the 2-dimensional array of coefficients that is most likely to find all non-zero coefficients while encountering as few zero coefficients as possible. Classically, most video codecs (such as H.264) use scan tables derived from the zig-zag pattern. VP9, interestingly, uses a slightly different pattern, where scan tables mimic a quarter-circle connecting points ordered by distance to the top/left origin. For example, the 8×8 zig-zag (left) and VP9 (right) scan tables (showing ~20 coefficients) compare like this: 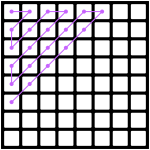 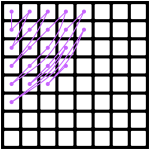 In cases where the horizontal and vertical transform (DCT vs. ADST) are different, the scan table also has a directional bias. The bias stems from the fact that transforms combining ADST and DCT typically concentrate the energy in the ADST direction more than in the DCT direction, since the ADST is the spatial origin of the prediction data. These scan tables are referred to as row (used for ADST vertical + DCT horizontal 2-D transforms) and column (used for ADST horizontal + DCT vertical 2-D transforms) scan tables. For the 8×8 transform, these biased row (left) and column (right) scan tables (showing ~20 coefficients) look like this: 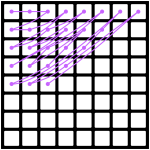 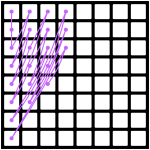 The advantage of the VP9 scan tables, especially at larger transform sizes (32×32 and 16×16) is that it leads to a better separation of zero- and non-zero-coefficients than classic zig-zag or related patterns used in other video codecs.

The aforementioned processes allow you to compress individual blocks in VP9. However, they also lead to blocking artifacts at the edges between transform blocks and prediction blocks. To resolve that (i.e. smoothen unintended hard edges), VP9 imposes a post-block decoding loopfilter which aims to soften hard block edges. There are 4 separate loopfilters that run at block edges, modifying either 16, 8, 4 or 2 pixels. Smaller transforms allow only small filters, whereas for the largest transforms, all filters are available. Which one runs for each edge depends on filter strength and edge hardness.

On the earlier-used image, the loopfilter effect (contrast increased by ~100x) looks like this: 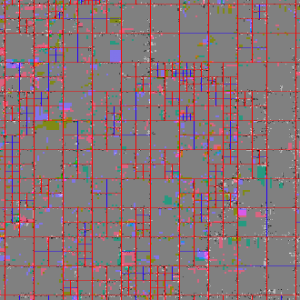 So far, we’ve comprehensively discussed algorithms used in VP9 block coding and image reconstruction. We have not yet discussed how symbol aggregation into a serialized bitstream works. For this, VP9 uses an binary arithmetic range coder. Each symbol (e.g. an intra mode choice) has a probability table associated with it. These probabilities can either be global defaults, or they can be explicitly updated in the header of each frame (forward updates). Based on the entropy of the decoded data of previous frames, the probabilities are updated before the coding of next frames starts (backward updates). This means that probabilities effectively adapt to data entropy – but without explicit signaling. This is very different from how H.264/HEVC use CABAC, since CABAC uses per-symbol adaptivity (i.e. after each bit, the associated probability is updated – which is useful, especially in intra/keyframe coding) but resets state between frames, which means it can’t take advantage of entropic redundancy between frames. VP9 keeps probabilities constant during the coding of each frame, but maintains state (and adapts probabilities) between frames, which provides compression benefits during long stretches of inter frames.

The above should give a pretty comprehensive overview of algorithms and designs of the VP9 video codec. I hope it helps in understanding why VP9 performs better than older video codecs, such as H.264. Are you interested in video codecs and would you like to write amazing video encoders? Two Orioles, based in New York, is hiring video engineers!

15 Responses to Overview of the VP9 video codec