Ubuntu 18.04.3 LTS has just been released. As usual with LTS point releases, the main changes are a refreshed hardware enablement stack (newer versions of the kernel, xorg & drivers) and a number of bug and security fixes.

For the Desktop, newer stable versions of GNOME components have been included as well as a new feature: Livepatch desktop integration.

For those who aren’t familiar, Livepatch is a service which applies critical kernel patches without rebooting. The service is available as part of an Ubuntu Advantage subscriptions but also made available for free to Ubuntu users (up to 3 machines).  Fixes are downloaded and applied to your machine automatically to help reduce downtime and keep your Ubuntu LTS systems secure and compliant.  Livepatch is available for your servers and your desktops.

Andrea Azzarone worked on desktop integration for the service and his work finally landed in the 18.04 LTS.

To enabling Livepatch you just need an Ubuntu One account. The set up is part of the first login or can be done later from the corresponding software-properties tab.

Here is a simple walkthrough showing the steps and the result:

The wizard displayed during the first login includes a Livepatch step will help you get signed in to Ubuntu One and enable Livepatch: 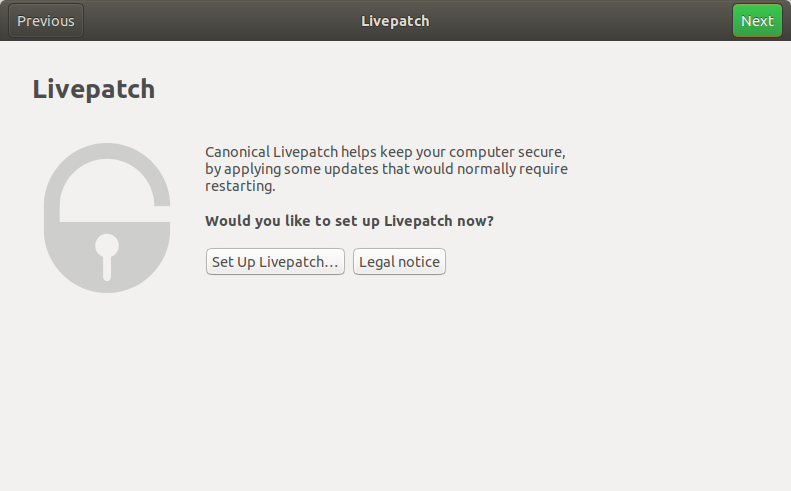 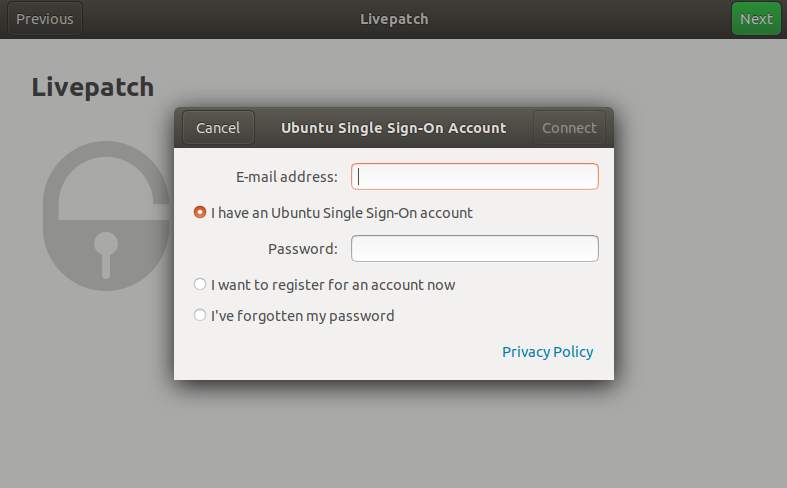 Clicking the ‘Set Up’ button invites you to enter you Ubuntu One information (or to create an account) and that’s all that is needed.

The new desktop integration includes an indicator showing the current status and notifications telling when fixes have been applied. 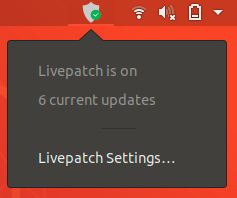 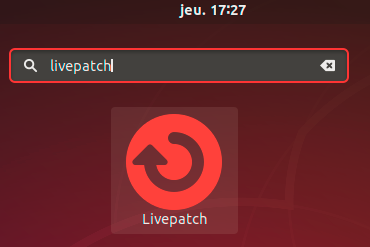 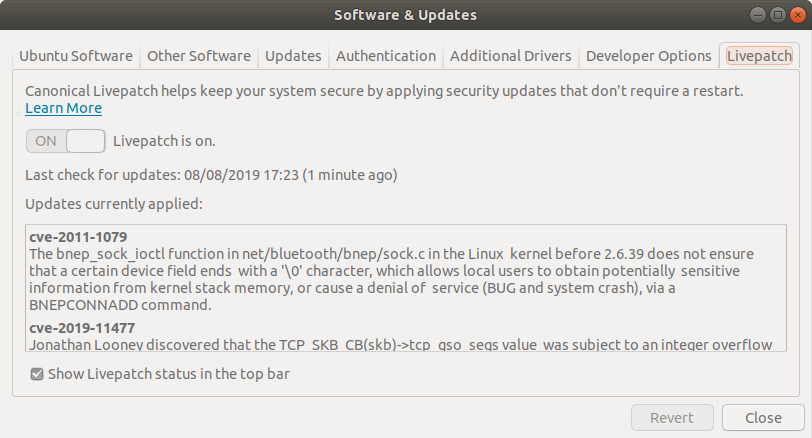 You can always hide the indicator using the toggle if you prefer to keep your top panel clean and simple.

Enjoy the increased security in between reboots!

Christian recently released bolt 0.8, which includes IOMMU support. The Ubuntu security team seemed eager to see that new feature available so I took some time this week to do the update.

Since the new version also featured a new bolt-mock utility and installed tests availability. I used the opportunity that I was updating the package to add an autopkgtest based on the new bolt-tests binary, hopefully that will help us making sure our tb3 supports stays solid in the futur 😉

The update is available in Debian Experimental and Ubuntu Eoan, enjoy!

I saw a few cases of those situations happening recently

System76 / Pop! OS team, while you should be proud of the work you do for you users I think you are going the wrong way there. Working on fixes and including them early in your product is one thing, not upstreaming those fixes and using that for marketing you as better than your upstreams is a risky game. You might be overlooking that now, but divergence has a cost, as does not having good relationship with your upstreams.

What triggered me to write this blog today was after reading https://blog.system76.com/post/185276928258/system76-news-a-may-with-zing yesterday which included that item

We’ve updated the youtube-dl package to a newer version. This package, maintained by Debian and Canonical, is used for downloading videos from YouTube. Changes made by Google to the YouTube API had recently broken this package in the Ubuntu repositories, hence the update.

So instead of working with their upstream on a fix which would benefit Ubuntu and Pop! OS users they did an upload in their overlay PPA with as description
‘ * Backport to Pop!_OS because Ubuntu is too slow.’

Thanks System76 for not trying to work with us and then stab us in the back with that package description.

Ubuntu users, sorry that we didn’t get to fix that earlier since it was not brought to our attention, I did upload SRUs for Bionic and Disco now, details on https://bugs.launchpad.net/ubuntu/+source/youtube-dl/+bug/1831778

Recently Michael blogged about epiphany being outdated in Ubuntu. While I don’t think that a blog ranting was the best way to handle the problem (several of the Ubuntu Desktop members are on #gnome-hackers for example, it would have been easy to talk to us there) he was right that the Ubuntu package for epiphany was outdated.

Ubuntu does provide updates, even for packages in the universe repository

One thing Michael wrote was

Because Epiphany is in your universe repository, rather than main, I understand that Canonical does not provide updates

That statement is not really accurate.

First Ubuntu is a community project and not only maintained by Canonical. For example most of work done in recent cycles on the epiphany package was from Jeremy (which was one of the reason the package got outdated, Jeremy had to step down from that work and no-one picked it up).

Secondly, while it’s true that Canonical doesn’t provide official support for packages in universe we do have engineers who have interest in some of those components and help maintaining them.

Going back to the initial problem, Michael was right and in this case Ubuntu didn’t keep up with available updates for epiphany, which has now been resolved

Again the reality is a bit more complex. Snaps don’t have depends like debs do, so by nature they don’t have problems like being blocked by missing depends. To limit duplication we do provide a gnome platform snap though and most of our GNOME snaps use it. That platform snap is built from our LTS archive which is on GTK 3.22 and our snaps are built on a similar infrastructure.

Ken and Marcus are working on resolving that problem by providing an updated gnome-sdk snap but that’s not available yet. Meanwhile they changed the snap to build gtk itself instead of using the platform one, which unblocked the updates, thanks Ken and Marcus!

I saw a few other comments recently along the lines of “Ubuntu does not provide updates for its GNOME components in stable series” which I also wanted to address here.

We do provide stable updates for GNOME components! Ubuntu usually ship its new version with the .1 updates included from the start and we do try to keep up with doing stable updates for point releases (especially for the LTS series).

Now we have a small team and lot to do so it’s not unusual to see some delays in the process.
Also while we have tools to track available updates, our reports are currently only for the active distro and not stable series which is a gap and leads us sometime to miss some updates.
I’ve now hacked up a stable report and reviewed the current output and we will work on updating a few components that are currently outdated as a result.

Oh, and as a note, we do tend to skip updates which are “translations updates only” because launchpad does allows us to get those without needing a stable package upload (the strings are shared by serie so getting the new version/translations uploaded to the most recent serie is enough to have those available for the next language pack stable updates)

And as a conclusion, if as an upstream or user you have an issue with a component that is still outdated in Ubuntu feel free to get in touch with us (IRC/email/launchpad) and we will do out best to fix the situation.

There was some blog entries this week about GNOME stable updates on Ubuntu. There is no reason new bug fix versions could not be uploaded to stable out of the fact that the SRU rules require to check carrefully all the changes and doing this job on all the GNOME tarballs is quite some work, or the ubuntu desktop team is quite small and already overworked.

There is a list of packages which have a relaxed rules though, we have discussed adding GNOME to those since the stable serie usually has fixes worth having and not too many unstable changes (though the stable SVN code usually doesn’t get lot of testing) and decided than the stable updates which look reasonable should be uploaded to hardy-update.

There was also some concerns about gnome-games, 2.20.3 has been uploaded to gutsy-proposed today which should reduce the number of bugs sent to the GNOME bugzilla. The new dependencies on ggz has also been reviewed and 2.21 should be built soon in hardy.

The FOSSCamp and UDS week has been nice and a good occasion to talk to upstream and people from other distributions. We had desktop discussions about the new technologies landing in GNOME this cycle (the next Ubuntu will be a LTS so we need a balance between new features and stability), the desktop changes we want to do, and how Ubuntu contributes to GNOME.

Some random notes about the Ubuntu upstream contributions:

GNOME updates in gutsy and hardy

Update: Scott pointed that you can use http://patches.ubuntu.com/n/nautilus/extracted to access to the current nautilus version

GNOME 2.20.0 is available, congratulation to everybody who worked on the new version

The Ubuntu users can try it in gutsy

The GUADEC week really rocked. There was quite some interesting presentations and talks during the week and it was really nice to meet Vincent, Jeff, Ryan, Lucas, Thomas, Carlos, Danilo and lot of other cool guys again.

Some random notes on the week:

I’m sending this entry using blogs.gnome.org, thanks to jdub and everybody who worked on the new system which really rocks and is trivial to use!

Some news of the Ubuntu desktop:

The team is now working on GNOME 2.19.4. The packages which need an update are listed on the wiki, if you want to work on one of them just write your name next to it