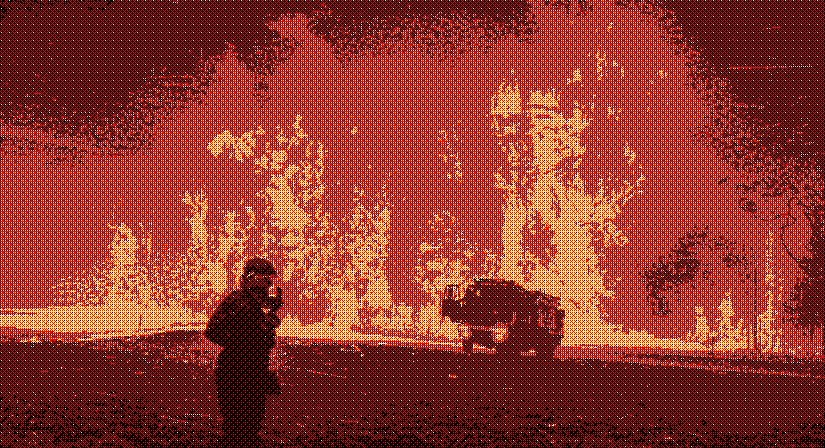 This is a lightly edited version of my GUADEC 2022 talk, given at c-base in Berlin on July 21, 2022. Trigger Warning: Very depressing facts about climate and societal collapse.

In this community I’m primarily known for my work as a designer, but if you know me a bit better you’re aware that I also do a different kind of activism, which sometimes looks like this:

This was an Extinction Rebellion action in Berlin earlier this year, the week the new IPCC report was released. Among other things, the report says that keeping global warming to within 1.5 degrees, the goal all our governments agreed to, is basically impossible at this point.

The idea with this action in particular was to force the state to symbolically destroy the 1.5 degree goal in order to clear our street blockade. Here’s the police doing that:

The climate crisis is no longer a thing future generations will one day have to deal with, like we were told as kids. It’s here, affecting all of us today, including in the global north. Some of the people travelling to this year’s Berlin Mini GUADEC were delayed by the massive heatwave, because train tracks on the way could not handle the heat.

There are already a number of unavoidable horrible consequences on the horizon. These include areas around the equator where the combination of temperature and humidity is deadly for humans for parts of the year, crop failures causing ever larger famines, conflicts around resources such as water, and general infrastructure breakdown caused by a combination of ever more extreme weather events and decreasing capacity to deal with them.

Second-order consequences will include billions of people having to flee to less affected areas, which in turn will have almost unimaginable political consequences – If 5 million refugees from the Syrian civil war caused a Europe-wide resurgence in proto-fascist parties, what will 100 million or more do?

And that’s not the worst of it.

The climate system is not linear. There are a number of tipping elements which can, once destabilized, not be brought back to their previous state and go from being carbon sinks to actually releasing carbon into the atmosphere.

These include forests such as the Amazon, polar ice shields such as in Greenland, and perhaps most ominously, the gigantic amounts of methane frozen in the Russian permafrost. If some or all of these elements tip, they can kick off a self-reinforcing feedback loop of ever-accelerating warming, independent of human emissions.

We don’t know which tipping points are reached at what temperature exactly, but past 2 degrees it’s very likely that we’ll cross enough of them to cause 4, 5, or more degrees of warming.

While many terrible things can’t be avoided anymore, scientists tell us that we still have a “brief and rapidly closing window of opportunity” to avoid some of the worst consequences – If we manage to turn things around and start actually reducing emissions in the next few years, and then continue doing so over the following decades.

That doesn’t mean each of us individually deciding to buy organic food and bamboo toothbrushes – The individual carbon footprint was literally invented by BP to deflect responsibility from corporations onto people. It’s obviously important to reduce our emissions as much as possible individually (especially luxury emissions such as meat and air travel), but that should not be where we stop or invest most of our energy.

No amount of individual action can really move the needle when just 100 companies are responsible for 70% of global emissions. All the real solutions are structural.

Unfortunately, on that front we’ve seen zero actual progress over the 40+ years that we’ve known about the impending catastrophe. Emissions have continuously increased in the past decades, rather than decreased. We’ve emitted more since the release of the first IPCC report in 1992 than in the entire history of humanity before that point. Even now, our governments are still subsidizing new fossil infrastructure with public money, while failing to meet the (already insufficient) goals they set for themselves.

This political and economic system is clearly not capable of the kind of action needed to avert this crisis. However, we’re also not going to be able to build an entirely new system in the next few years, there’s just not enough time. We can either try to use the existing state regulatory apparatus to reduce emissions now, or accept collapse as inevitable.

That sounds incredibly bleak, and it is – but there really is still a path to turn this around, and there are people and movements with a plan. Depending on where you live they have different names, logos, and tactics, but the strategy is roughly the same:

This is of course an incredibly simplified version of the strategy (and I’d recommend reading up on it in detail), but it’s basically what groups such as Exctinction Rebellion (international), Just Stop Oil (UK), Letzte Generation (DE), Dernière Rénovation (FR), and many others are working towards.

So in the face of this, should we all just drop everything and start doing blockades for the next few years?

Well, yes. If you’re not currently doing civil disobedience wherever you live, I’d recommend looking into what groups exist locally and joining them. Even if you’re not ready to glue yourself to the road, there’s plenty of stuff you can do to help. They need your support to succeed, and we all really need them to succeed.

If you’re based in or near Germany, there’s actually a great opportunity coming up for getting involved: There’s a big rebellion wave September 17-20, so now’s an ideal time to get in touch with a local group nearby, do an action training, and book the trip to Berlin! See you there ;)

This is the first part of a four-part series. In part 2 we’ll explore what happens if we don’t manage to force our governments to enact radical change in the next few years, and what that would mean concretely for free software.