tl;dr: Fractal is a new Matrix app for GNOME. Come join our hackfest May 10-13th in Strasbourg!

For the past few months, I’ve been contributing to a new group messaging app called Fractal. Its aim is to be so good that we can maybe, eventually, finally replace IRC as the primary communication channel for GNOME development.

Though IRC has been around forever, it’s hardly a good user experience by today’s standards, and can be a significant hurdle to onboarding new contributors (especially non-technical ones). Some of the main issues are:

This has led to some free software projects going so far as to use proprietary services such as Slack. However, even then you’re stuck with an Electron app, which is slow and not integrated with the desktop at all.

The Matrix protocol is a modern alternative to IRC. It provides features such as persistence, inline media, and multi-device syncing. Importantly for GNOME, it is also backwards-compatible to IRC using bridges, allowing us to use the fancy new Matrix features without being cut off from the rest of the community.

Over the past few years, some GNOME developers have started using Matrix, but the lack of a good native client has held back adoption.

And that’s where Fractal comes in: It’s a native Matrix client for GNOME, with an interface focused on the IRC use case (discussions in large, high-volume rooms). We want it to be a fast, native alternative to Slack that can compete on UX, and doesn’t require non-free network services.

I started contributing in late October, when the app was still called Guillotine, and looked like this:

I got involved after Daniel Garcia Moreno, the app’s primary developer, mentioned that he was looking for a designer to help out with his Matrix app on #gnome-design. We then started working on revamping the somewhat haphazardly designed interface, and making it look like a proper GNOME app.

Over the past few months the community has grown from just Daniel and I to over 120 people in our Matrix room, and a number of regular contributors. We’ve redesigned every part of the app (except for the room directory), and added a number of small but essential features, such as invites, room creation, and username autocomplete.

The app now looks like this (though the design is still evolving quite rapidly): 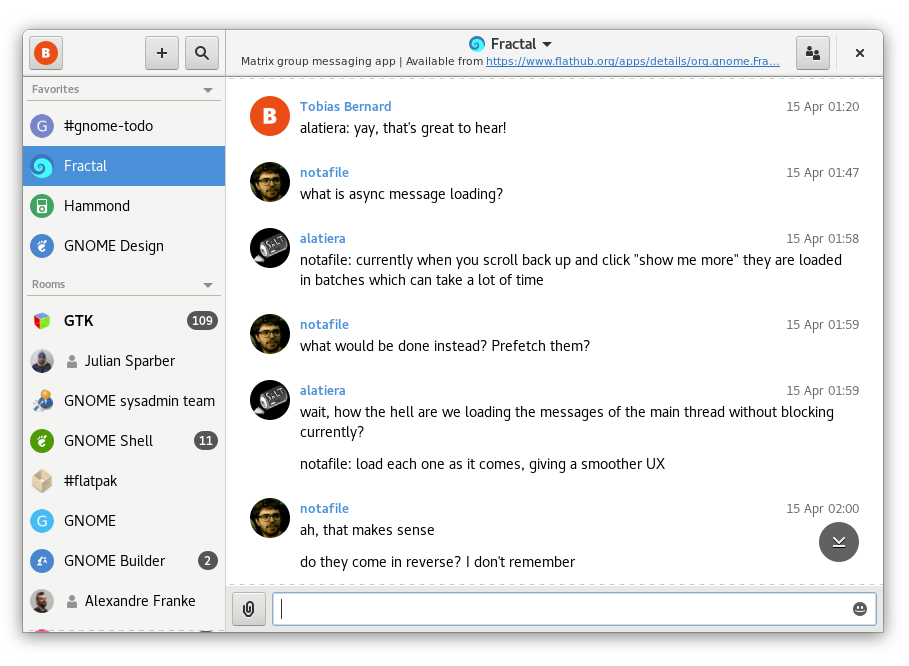 Though it’s still a bit rough, Fractal is already very usable as a day-to-day Matrix client. You can install the Flatpak from Flathub and try it yourself. Bug reports are always appreciated.

So where do we go from here?

For the past months we’ve mainly been working on overhauling the interface, but we haven’t added many new features. As most of the foundational interface work is done now, we can start planning larger new initiatives.

That’s why next month (May 10th-13th) we’re going to have a Fractal Hackfest in Strasbourg. The core contributors will meet for the first time and discuss exciting new things, such as a better onboarding flow, a new responsive layout, and support for more Matrix features.

Among the people joining the hackfest will be Matthew from Matrix, and some of my coworkers from Purism. It will be a great opportunity for plotting future collaborations.

If you’re interested in joining the hackfest, add yourself to the hackfest wiki page or come talk to us in the Fractal Matrix room.

I’m very happy to announce that I’ve joined Purism. It’s awesome to be working for a company that not only cares about software freedom, but also has Ethical Design as a core principle. My role there is UI/UX designer on the Librem 5, a phone built from the ground up to run free software and GNU/Linux.

As a past user of first Firefox OS and then Ubuntu Touch, I couldn’t be more excited about this. Unlike these previous failed efforts, the Librem 5 is focused on freedom and privacy, because it’s made by people who share that philosophy. It’s using PureOS (a full GNU/Linux distro based on Debian), instead of a completely different technology stack with Android drivers (like Firefox OS and Ubuntu Touch did). To make things even sweeter, the UI will be GTK-based, and we’re using upstream GNOME apps (which we’re adapting with a responsive layout). We’ll also be working on new applications for the phone, such as Calls and Messages, which will work on the desktop as well. We want as much of this work as possible to go upstream, so it can benefit all GNOME users.

It’s still early days, but some of the work around apps should become more concrete in the coming weeks, so expect phone-related discussions in #gnome-design. Let’s make a killer GNOME phone!