Wing is a library which provides GLib-like API to some Windows API.

The goal of this library is twofold:

Currently it already provides api for:

You can find the git repository in: https://git.gnome.org/browse/wing

As usual if you are interested in this library, patches are very welcomed.

As you may know gtk-win32 is our build system that makes it easy to build all the GTK+ stack with Visual Studio. This blog will try to sum up some of the changes and updates that happened during the last few months:

Feel free to give it a try and make a pull request if there is any library or application that you are missing on gtk-win32. Specially I would really like to see there GStreamer.

In march, NICE was acquired by Amazon, as part of that I became an Amazon employee and since then with my colleagues we kept improving our High Performance Computing and remote visualization technologies. If you would like to get an opportunity developing one of the most innovative and performant remote desktop solutions in the market and help us to make 3D applications first class citizens in the Cloud, please have a look at our offers and please do not hesitate to contact me or Paolo if you need more information.

Our current offers can be found here: https://www.amazon.jobs/it/locations/asti-italy

In addition to the skills listed in the announcements, a deep knowledge of the Linux graphic stack (X, OpenGL, Wayland, etc.) will be very appreciated.

Posted in Uncategorized | Comments Off on We are hiring 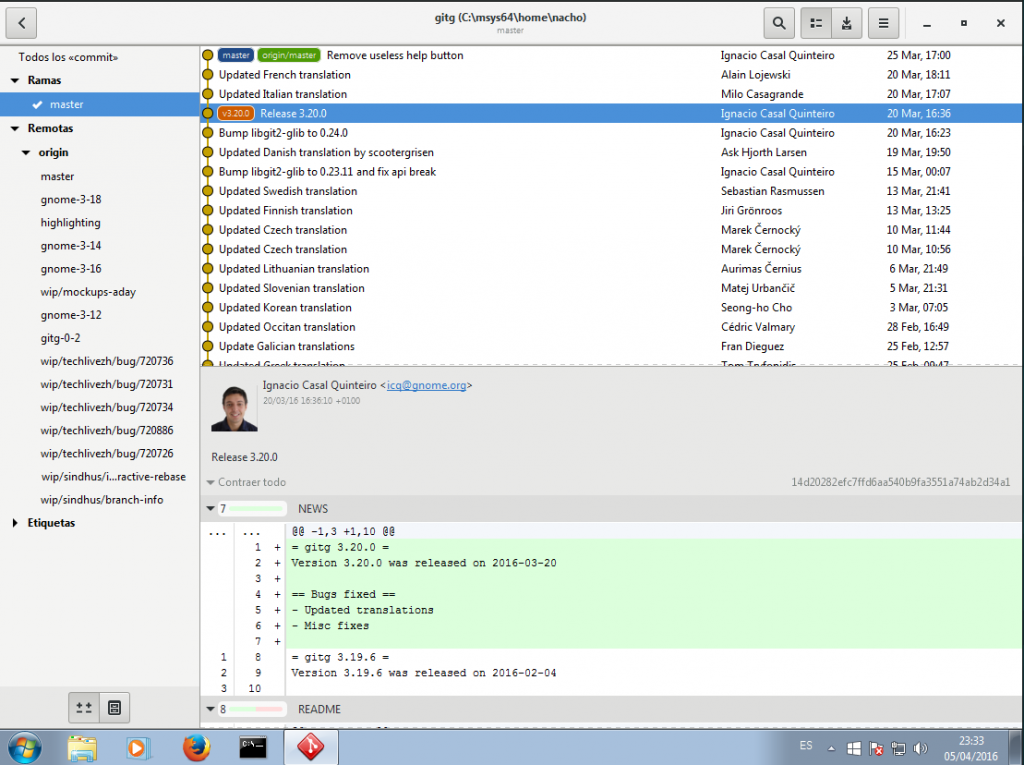 Apart from the release of gedit introduced on the previous post. Here you can see the last release of gitg running on Windows. There are still some minor problems with it but it is already working good enough for a daily usage. Also, it integrates with the context menu so you can right click on a folder and open it with gitg which will open the repository if it is a repository or fallback to the dash if it is not.

Download the the installer of gitg from this link.

Posted in Uncategorized | Comments Off on gitg 3.20.0 for Windows

It wasn’t without time but I am finally proud to say that we have a new version of gedit for Windows. This was a long road getting GTK+ 3 and all the dependencies properly working and there are a lot of people behind this, so thanks to all of them for the hard work.

Following up with Emmanuele’s blog posts about GTK+ being “dead” or “dying” I wanted to point out about the status of the MSVC builds for the GTK+ stack. Refer to my previous post to understand how to build it. During this cycle quite a few things have been done in order to further improve the status of the Visual Studio builds.

As usual Chun-wei Fan is the one to thank for keeping the msvc projects up to day and for adding the new ones.

I would like to officially announce that at NICE we have been working on a TLS backend for glib using Openssl. This still lives on the wip/openssl branch of glib-networking but hopefully next cycle we will manage to merge it to master.

Why are we not using the gnutls that is already implemented? There are a few reasons for it:

During the time that I spent implemented this backend I came to the conclusion that TLS is really hard! And it would have been harder if glib-networking didn’t have all those great unit tests. Thanks to all the people that wrote them. 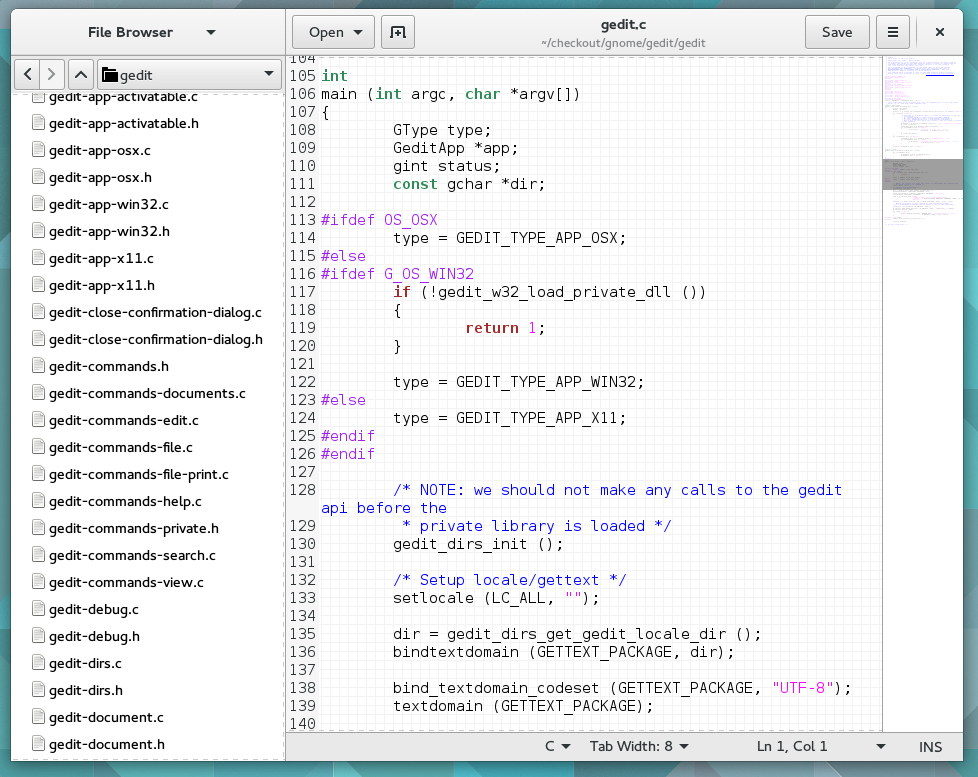 As you may know Christian Hergert introduced a first version of the minimap for gnome-builder. During the last few days we were working on getting it merged into GtkSourceView and it was pushed to it a few days ago. Now as a final step I added it to gedit. This was one of those features that were requested for a long time so we hope that you will enjoy it!

On Friday Paolo Borelli introduced Nuntius, the small project we’ve been working on to display android notifications on a GNOME desktop.

The feedback we got in these days has been great and it is energizing to receive comments, suggestions, bug reports and even patches! Thank you!
It is probably a good idea to clarify some things and reply to some frequent questions we received.

First of all we want to stress again that what is available today is basically a prototype: as soon as we had something able to connect and show the notifications we went ahead and published it because we think “release early, release often” is the best strategy when it comes to free software. Until yesterday it was not even set up to be translated, thought that is now fixed (hint hint!).

As part of my work at NICE I had the opportunity to research a bit how to build the GTK stack using MSVC. The reason for this is that even if we are currently using the msys2 binaries and we are quite happy with them, it becomes a pain to debug any issue you might have in GLib or GTK from MSVC.

The hexchat people took the instructions from Fan and made them easy to build GLib and GTK2 using a powershell script. After learning and fighting powershell (which BTW is actually quite nice) I made a fork of hexchat‘s repository and added GTK 3 to the build system. It is actually quite impressive how you manage to build everything with this script in a windows 7 VM in less than 6 minutes.

I am sharing this with you because those who had to fight GTK on windows I am pretty sure didn’t have it very easy. Also I think there are a lot of things to improve here:

The current solution we managed to get working is actually good enough for our purposes for what we use glib and gtk on our product but if someone wants to improve this I think it could be really good for the future of GTK and GLib.