A while ago, I posted about ffvp9, FFmpeg‘s native decoder for the VP9 video codec, which significantly outperforms Google’s decoder (part of libvpx). We also talked about encoding performance (quality, mainly), and showed VP9 significantly outperformed H.264, although it was much slower. The elephant-in-the-room question since then has always been: what about HEVC? I couldn’t address this question back then, because the blog post was primarily about decoders, and FFmpeg’s decoder for HEVC was immature (from a performance perspective). Fortunately, that concern has been addressed! So here, I will compare encoding (quality+speed) and decoding (speed) performance of VP9 vs. HEVC/H.264. [I previously presented this at the Webm Summit and VDD15, and a Youtube version of that talk is available also.]

The most important question for video codecs is quality. Scientifically, we typically encode one or more video clips using standard codec settings at various target bitrates, and then measure the objective quality of each output clip. The recommended objective metric for video quality is SSIM. By drawing these bitrate/quality value pairs in a graph, we can compare video codecs. Now, when I say “codecs”, I really mean “encoders”. For the purposes of this comparison, I compared libvpx (VP9), x264 (H.264) and x265 (HEVC), each using 2-pass encodes to a set of target bitrates (x264/x265: –bitrate=250-16000; libvpx: –target-bitrate=250-16000) with SSIM tuning (–tune=ssim) at the slowest (i.e. highest-quality) setting (x264/5: –preset=veryslow; libvpx: –cpu-used=0), all forms of threading/tiling/slicing/wpp disabled, and a 5-second keyframe interval. As test clip, I used a 2-minute fragment of Tears of Steel (1920×800). 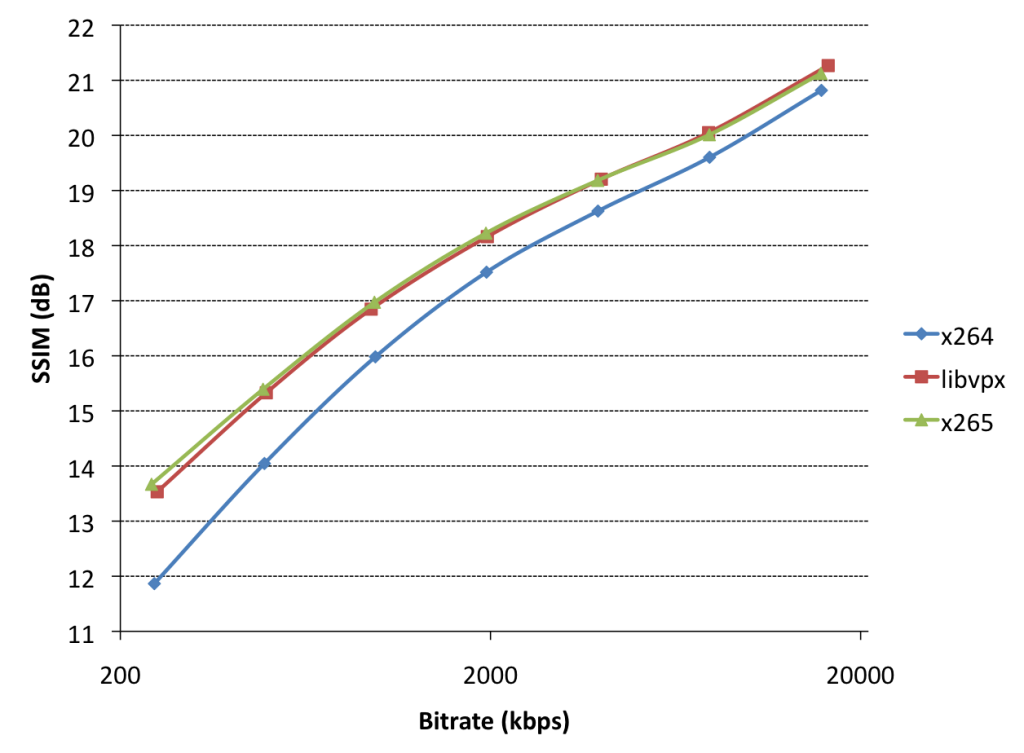 This is a typical quality/bitrate graph. Note that both axes are logarithmic. Let’s first compare our two next-gen codecs (libvpx/x265 as encoders for VP9/HEVC) with x264/H.264: they’re way better (green/ref is left of blue, which means “smaller filesize for same quality”, or alternatively you could say they’re above, which means “better quality for same filesize”). Either way, they’re better. This is expected. By how much? So, we typically try to estimate how much more bits “blue” needs to accomplish the same quality as (e.g.) “red”, by comparing an actual point of red to an interpolated point (at the same SSIM score) of the blue line. For example, the red point at 1960kbps has an SSIM score of 18.16. The blue line has two points at 17.52 (1950) and 18.63 (3900kbps). Interpolation gives an estimated point for SSIM=18.16 around 2920kbps, which is 49% larger. So, to accomplish the same SSIM score (quality), x264 needs 49% more bitrate than libvpx. Ergo, libvpx is 49% better than x264 at this bitrate, this is called the bitrate improvement (%). x265 gets approximately the same improvement over x264 as libvpx at this bitrate. The distance between the red/green lines and blue line get larger as the bitrate goes down, so the codecs have a higher bitrate improvement at low bitrates. As bitrates go up, the improvements go down. We can also see slight differences between x265/libvpx for this clip: at low bitrates, x265 slightly outperforms libvpx. At high bitrates, libvpx outperforms x265. These differences are small compared to the improvement of either encoder over x264, though.

So, these next-gen codecs sound awesome. Now let’s talk speed. Encoder devs don’t like to talk speed and quality at the same time, because they don’t go well together. Let’s be honest here: x264 is an incredibly well-optimized encoder, and many people still use it. It’s not that they don’t want better bitrate/quality ratios, but rather, they complain that when they try to switch, it turns out these new codecs have much slower encoders, and when you increase their speed settings (which lowers their quality), the gains go away. Let’s measure that! So, I picked a target bitrate of 4000kbps for each encoder, using otherwise the same settings as earlier, but instead of using the slow presets, I used variable-speed presets (x265/x264: –preset=placebo-ultrafast; libvpx: –cpu-used=0-7). 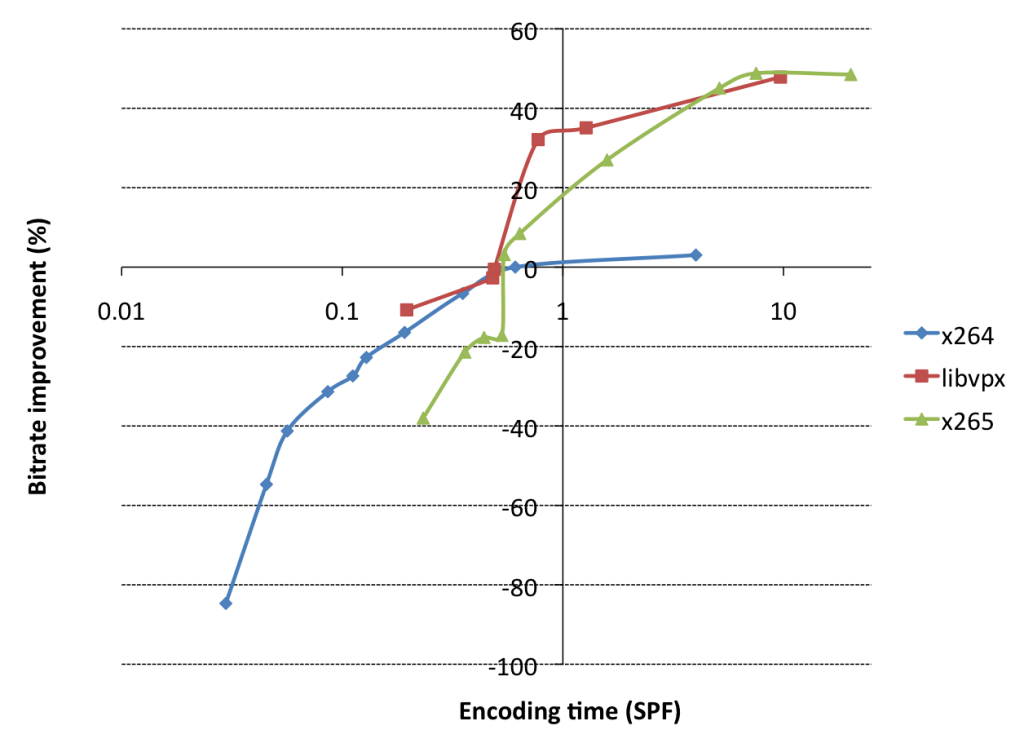 This is a graph people don’t talk about often, so let’s do exactly that. Horizontally, you see encoding time in seconds per frame. Vertically, we see bitrate improvement, the metric we introduced previously, basically a combination of the quality (SSIM) and bitrate, compared to a reference point (x264 @ veryslow is the reference point here, which is why the bitrate improvement over itself is 0%).

So what do these results mean? Well, first of all, yeah, sure, x265/libvpx are ~50% better than x264, as claimed. But, they are also 10-20x slower. That’s not good! If you normalize for equal CPU usage, you’ll notice that (again looking at the x264 point at 0%, 0.61 sec/frame), if you look at intersected points of the red line (libvpx) vertically above it, the bitrate improvement normalized for CPU usage is only 20-30%. For x265, it’s only 10%. What’s worse is that the x265 line actually intersects with the x264 line just left of that. In practice, that means that if your CPU usage target for x264 is anything faster than veryslow, you basically want to keep using x264, since at that same CPU usage target, x265 will give worse quality for the same bitrate than x264. The story for libvpx is slightly better than for x265, but it’s clear that these next-gen codecs have a lot of work left in this area. This isn’t surprising, x264 is a lot more mature software than x265/libvpx.

Now let’s look at decoder performance. To test decoders, I picked the x265/libvpx-generates files at 4000kbps, and created an additional x264 file at 6500kbps, all of which have an approximately matching SSIM score of around 19.2 (PSNR=46.5). As decoders, I use FFmpeg’s native VP9/H264/HEVC decoders, libvpx, and openhevc. OpenHEVC is the “upstream” of FFmpeg’s native HEVC decoder, and has slightly better assembly optimizations (because they used intrinsics for their idct routines, whereas FFmpeg still runs C code in this place, because it doesn’t like intrinsics). 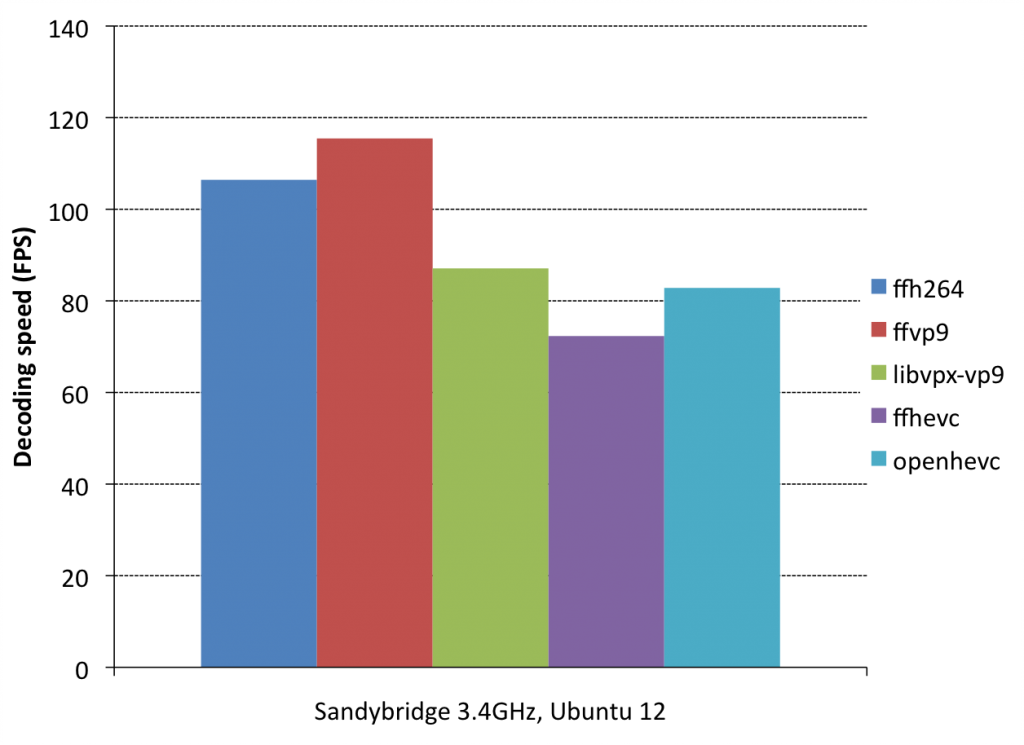 So, what does this mean? Let’s start by comparing ffh264 and ffvp9. These are FFmpeg’s native decoders for H.264 and VP9. They both get approximately the same decoding speed, ffvp9 is in fact slightly faster, by about 5%. Now, that’s interesting. When academics typically speak about next-gen codecs, they claim it will be 50% slower. Why don’t we see that here? The answer is quite simple: because we’re comparing same-quality (rather than same-bitrate) files. Decoders that are this well optimized and mature, tend to spend most of their time in decoding coefficients. If the bitrate is 50% larger, it means you’re spending 50% more time in coefficient decoding. So, although the codec tools in VP9 may be much more complex than in VP8/H.264, the bitrate savings cause us to not spend more time doing actual decoding tasks at the same quality.

Next, let’s compare ffvp9 with libvpx-vp9. The difference is pretty big: ffvp9 is 30% faster! But we already knew that. This is because FFmpeg’s codebase is better optimized than libvpx. This also introduces interesting concepts for potential encoder optimizations: apparently (in theory) we should be able to make encoders that are much better optimized (and thus much faster) than libvpx. Wouldn’t that be nice?

Lastly, let’s compare ffvp9 to ffhevc: VP9 is 55% faster. This is partially because HEVC is much, much, much more complex than VP9, and partially because of the C idct routines in ffhevc. To normalize, we also compare to openhevc (which has idct intrinsics). It’s still 35% slower, so the story for VP9 at this point seems more interesting than for HEVC. A lot of work is left to be done on FFmpeg’s HEVC decoder. 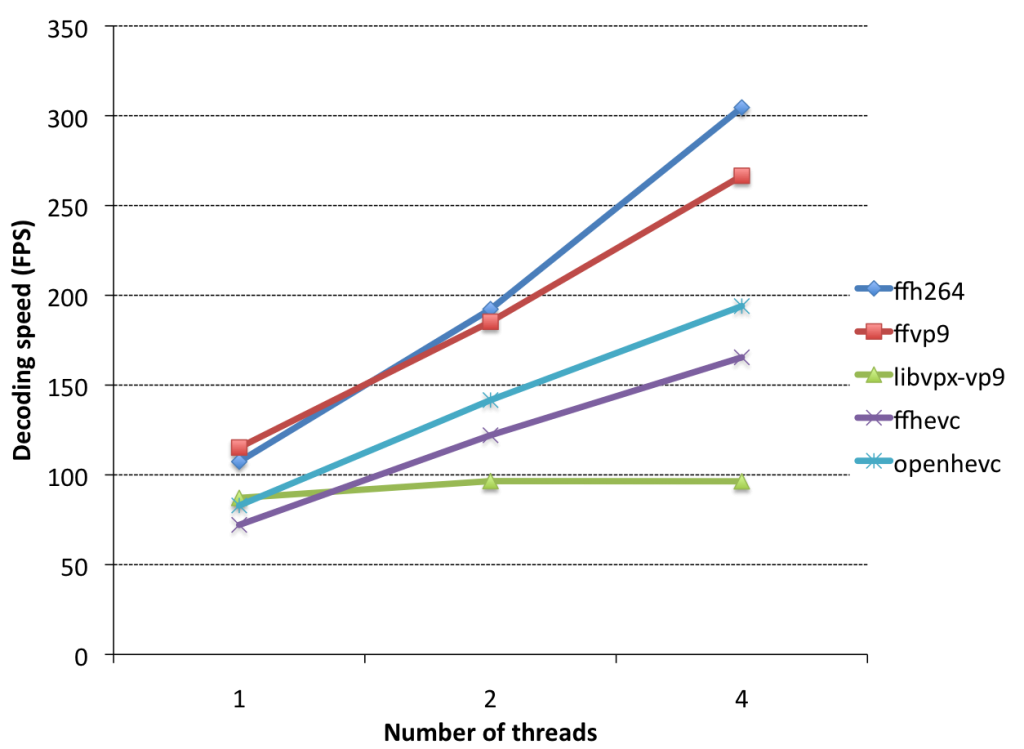 Again, let’s start by comparing ffvp9 with ffh264: ffh264 scales much better. This is expected, the backwards adaptivity feature in VP9 affects multithreaded scaling somewhat, and ffh264 doesn’t have such a feature. Next, ffvp9 versus ffhevc/openhevc: they both scale about the same. Lastly: libvpx-vp9. What happened? Well, when backwards adaptivity is enabled and tiling is disabled in the VP9 bitstream, libvpx doesn’t use multi-threading at all, so I’ll call it a TODO item in libvpx. There is no reason why this is the case, as is proven by ffvp9.

Lastly, I was asked this question during my VDD15 talk, and it’s fair question so I want to address it here: why didn’t I talk about encoder multi-threading? There’s certainly a huge scope of discussion there (slicing, tiling, frame-multithreading, WPP).  The answer is that the primary target of my encoder portion was VOD (e.g. Youtube), and they don’t really care about multi-threading, since it doesn’t affect total workload. If you encode four files in parallel on a 4-core machine and each takes 1 minute, or you encode each of them serially using 4 threads, where each takes 15 seconds, you’re using the full machine for 1 minute either way. For clients of VOD streaming services, this is different, since you and I typically watch one Youtube video at a time.