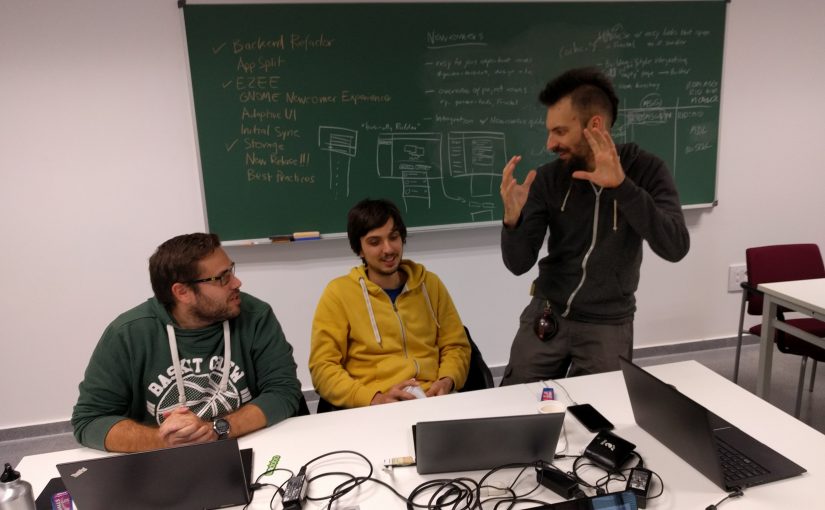 Last week I was in Seville, Spain for our second Fractal Hackfest this year. This time it was organized by Daniel Garica Moreno, and held on the University of Seville campus. It was a small event with mostly core developers, focused on driving forward the backend changes and refactoring needed to make our future plans (end-to-end and the app split) possible. We also had some local newcomers join (shoutout to Alejandro Domínguez).

The main reason why we wanted to have another hackfest was to drive forward the long-term effort of making the application more modular, in order to add persistent storage and allow for the app split. The work done over the past few months (such Julian’s room history refactor) has gotten us much closer to that, but there were still some missing pieces and open questions.

During the hackfest we discussed some of these things, and decided, among other things, to split the backend out into a separate crate and move to SQLite for persistent storage. Daniel and Julian already started working on these things, see their blog posts for more details.

The other focus for the hackfest was discussing an improved GNOME Newcomer experience. Finding the right rooms to join is currently quite confusing, as there is no central directory of all GNOME rooms. The main way people discover rooms seems to be word of mouth or googling for them, which is clearly not great.

Since one of the main goals for Fractal is to provide a more modern alternative to IRC for GNOME developers, we’ve been thinking about how to make it seamless to discover and join GNOME rooms for some time.

In theory Matrix has communities, which would address use cases like this one. However, since the spec for this is not really settled yet, and implementing it would be a lot of work, we’d like to do something simpler for now.

Looking at some relevant art we found Builder’s integration of Newcomer apps on the project screen quite interesting, because it’s very accessible but doesn’t get in the way.

The idea we came up with is combining the newcomer UX with the room directory into a new discovery view, and moving it to a more prominent location in the sidebar. There are still some open questions about how exactly we’d implement this, but it’s an exciting direction to be working towards.

We did a lot of overdue housekeeping and organizational work, like moving to GNOME/ on Gitlab (thanks Carlos!), getting a new policy for code reviews and QA in place, issue triage, fixing bugs, and starting the process of documenting best practices we’d like contributors make use of.

Lastly, we made a push to fix some of the last outstanding blocker bugs to get a new stable release out the door, which is long overdue (the last release was in September, which is an eternity by our standards). A ton of exciting stuff has landed on master since then: a more legible layout for the message view (using Libhandy’s HdyColumn), smoother message loading, a reorganized header bar with in-window primary menu, and support for large emoji. I’m very excited to finally get these things in the hands of users.

The new release now almost ready, and will be on Flathub very soon. Since there were a lot of big changes under the hood, there will probably be some exciting new bugs as well, so please file issues on Gitlab :)

Thanks to everyone who attended the hackfest, Daniel for organizing, and the University of Seville for hosting us. Thanks also to my employer Purism for sponsoring my travel and accommodation, and the GNOME Foundation, SUGUS, and Plan4D for sponsoring some lunches and dinners. See you next time o/