Endless OS 3.8.0 has just been released, which brings GNOME 3.36 to our users. There’s a particularly big overlap between “improvements in Endless OS” and “improvements in GNOME” this cycle, so I wanted to take a minute to look back over what the Endless team worked on in GNOME 3.36.

Allan Day has already written about the improvements to the login and unlock experience in GNOME 3.36, so I won’t retread this ground in too much detail. As he (and Nick Richards, in his trip report for Endless OS 3.8.0) mentioned, this change has been anticipated for a long time, so I’m particularly glad that Georges Stavracas and Umang Jain (together with Florian Müllner from Red Hat) could make this happen for this release. The first thing I interact with when I sit down at my computer is the login screen or the lock screen, and the refreshed design is a pleasure to use. (My daughter is sad that Granny’s cat is no longer visible on the lock screen, though.) 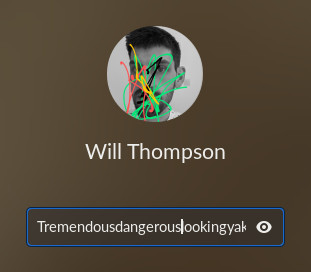 One improvement that’s perhaps most visible in the redesigned lock screen is the inline “eye” icon to reveal the text in the password field, which was implemented by Umang Jain independently of his work on the lock screen itself. The motivation for this change was actually another system dialogue: the Wi-Fi password dialogue.

During the development of the Hack product – a game-like platform for self-directed learning built atop Endless OS – the team ran many playtesting sessions. While the emphasis of these sessions was on Hack itself, the test users – typically younger teens – would often run through initial setup on a freshly-installed OS. Within a few clicks of turning on the computer, you select your Wi-Fi network and enter its password, which turned out to be a big stumbling block for many users. Wi-Fi passwords are long strings of randomly-generated characters, and on many occasions users simply couldn’t enter the password correctly. The entry has always had a Show Text option in the right-click menu, but right-clicking is itself an unfamiliar operation for younger users more familiar with mobile devices.

For a year or so, Endless OS has included a parental controls feature, which operates along a couple of axes:

In past releases, this feature was hard to discover and use. At a superficial level, the UI to control it was buried in Settings → Details → Users → (select a non-administrator user) → (scroll down) → (frame within frame within frame). But the real issue was that many Endless OS systems have the child as the primary, administrator user, created through Initial Setup when the machine is unboxed. To meaningfully use parental controls, you’d need to create a separate parent user, then downgrade the child’s account, neither of which is a particularly discoverable operation.

In autumn last year, we met with Allan Day, Richard Hughes and Matthias Clasen from Red Hat to talk through this problem space. Following that, Robin Tafel, Philip Withnall and Matthew Leeds designed and implemented a new flow for parental controls. The key changes are: 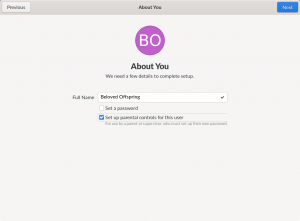 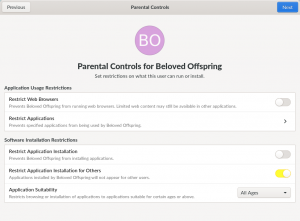 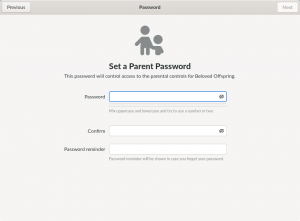 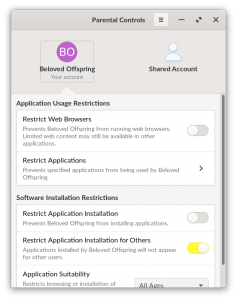 There are a few downstream bits and bobs outstanding, such as a cross-reference from GNOME Settings’ Users panel, but the bulk of this feature is available upstream in GNOME Initial Setup, Software, and Shell 3.36. Parental controls needs close integration with the application management infrastructure, and Flatpak upstream has the necessary hooks. On Endless OS, supporting Flatpak apps — plus Chromium as a special case — is good enough, since that is the sole mechanism for installing applications. It would be great to see support in Malcontent for other package and app managers.

Special thanks to Jakub Steiner for creating a great icon at very short notice.

One of the biggest differences between vanilla GNOME and Endless OS is the app grid, which in Endless is on the desktop and fully under the user’s control. Georges Stavracas has been incrementally chipping away at this, and support for renaming folders landed in GNOME 3.36.

Besides highly-visible new features and redesigns, much (perhaps even most?) of the work of maintaining a desktop is in the parts you don’t see: improving libraries and plumbing, incremental tweaks to user interfaces, and dealing with the wide variety of hardware, software and users that interact with GNOME. Spelunking through the commit histories of various projects, I see many names of colleagues present and past, including André Moreira Magalhães and Philip Chimento respectively. Jian-Hong Pan from the Endless kernel team makes an appearance in GNOME Settings, as does a feature from erstwhile Endless kernel hacker Carlo Caione dating back to 2018.

Umang Jain, Philip Withnall and Matthew Leeds have put a lot of work into improving the robustness of GNOME Software and Flatpak, and there’s more landing as we speak. I’m particularly glad that Matthew has been tracking down missing Flatpak app updates in GNOME Software – bugs which hide information can be the trickiest ones to spot. And Philip is solving the latest Mystery of the Missing Progress Bar when installing Flatpak apps in GNOME Software.

Perhaps my favourite part of being involved in GNOME is collaborating with great people from organisations who, in a different world, might be bitter rivals. All of the work I’ve described was a joint effort with others from the GNOME community; and, just as other distributors share the fruits of our labour, we and our users share the fruits of theirs. This is the latest in a long line of great GNOME releases – long may this trend continue.