In December 2020, Chromium reached the Flathub stable channel. Assuming you have Flatpak 1.8.2 or newer, and your kernel is configured to allow unprivileged user namespaces, you can download it now. 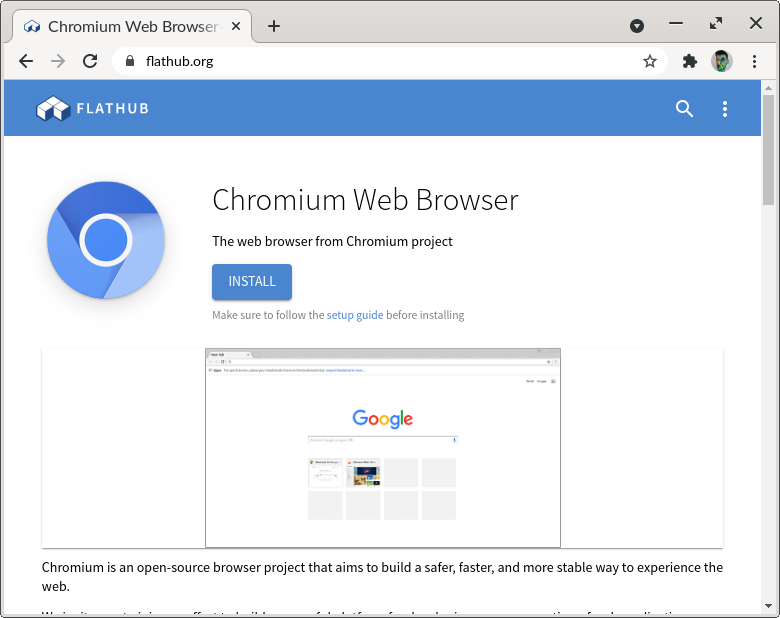 Endless OS is based on Debian, but rather than releasing as a bunch of .debs, it is released as an immutable OSTree snapshot, with apps added and removed using Flatpak.

For many years, we maintained a branch of Chromium as a traditional OS package which was built into the OS itself, and updated it together with our monthly OS releases. This did not match up well with Chromium, which has a new major version every 6 weeks and typically 2–4 patch versions in between. It’s a security-critical component, and those patch versions invariably fix some rather serious vulnerability. In some ways, web browsers are the best possible example of apps that should be updated independently of the OS. (In a nice parallel, it seems that the Chrome OS folks are also working on separating OS updates from browser updates on Chrome OS.)

Browsers are also the best possible example of apps which should use elaborate sandboxing techniques to limit the impact of security vulnerabilities, and Chromium is indeed a pioneer in this space. Flatpak applies much the same tools to sandbox applications, which ironically made it harder to ship Chromium as a Flatpak: when running in the Flatpak sandbox, it can’t use those same sandboxing APIs provided by the kernel to sandbox itself further.

Flatpak provides its own API for sandboxed applications to launch new instances of themselves with tighter sandboxing; what’s needed is a way to make Chromium use that…

Ryan Gonzalez has had a long-running project with us to enable Chromium-based apps to work well as Flatpaks. The first targets were apps built with Electron: his zypak project provides an LD_PRELOAD-able library that redirects Chromium’s sandbox to use Flatpak’s sub-sandboxing API. This avoids the need to modify the (often proprietary) apps themselves, and is now used by dozens of Electron apps on Flathub which would otherwise not be usable with Flatpak. There’s also a version of Chrome in the Flathub beta channel using this technique.

For Chromium, we can take a different approach. It’s open-source code, being compiled by Flathub, so Ryan prepared some patches to teach it to use the Flatpak sandboxing APIs directly, for better performance and robustness.

Once the sandbox integration was done, there was a long list of other changes needed to make the Chromium Flatpak work at least as well as our previous built-in version, which André Moreira Magalhães from Endless worked through with Ryan.

Some of these came from the old Endless OS package, such as using a royalty-free implementation of AAC, splitting encumbered codecs to a separate package so they can be excluded as needed for distribution, and discarding background tabs when the system is under memory pressure (which is useful on systems with limited RAM, but is disabled by default on desktop Linux builds).

Others were specific to Flatpak, such as dealing with udev not being available in the sandbox, restoring the ability to create app launchers for websites, integrating with Flatpak’s network proxy portal, and allowing Chromium policy files to be provided by the host system.

Over in Endless OS, we also needed to update users’ existing file associations and migrate their Chromium profiles to its new home. 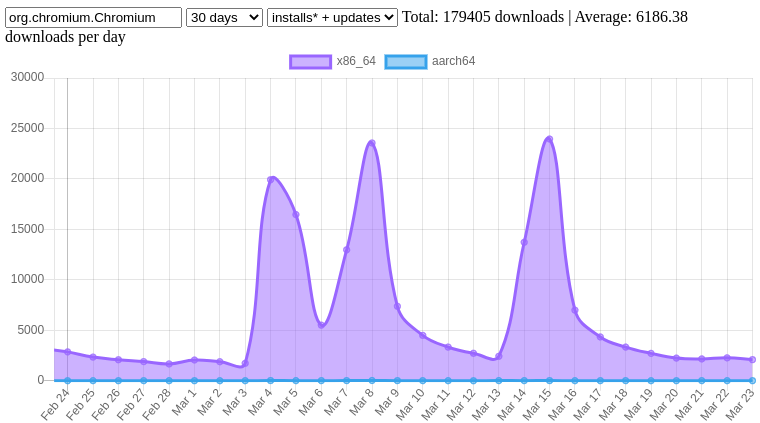 The chart above is the Flathub download statistics for Chromium in the past 30 days. Counting the points between 14th March (when the most recent update was pushed) and 21st March, there have been nearly 60,000 downloads. The majority of these will be Endless OS users: our 3.9.2 release in January 2021 rolled this change out to all users, and Endless OS has automatic updates enabled by default. But Flathub has a broader reach than just Endless OS! I believe that users of System76’s Pop!_OS have been migrated from a .deb of Chromium to this Flatpak, and surely there are many users on other distributions, too. It’s also been used as the basis for other apps on Flathub, including ungoogled-chromium.

As an added bonus, the Flatpak is wired up to flatpak-external-data-checker, which now automatically opens a pull request when a new Chromium release is published. Typically, new major releases need manual intervention to refresh the Flatpak patches, but minor releases often build without issue: for these, one can just smoke-test the test build from the pull request, and then merge it, reducing what used to be days of effort rebasing the package in Endless OS to the work of minutes. I love it when a plan comes together.

A quick glance at the issues on the flathub/org.chromium.Chromium repo will show that there is always more work to be done. We would love to see other distributions getting involved, reducing the duplicated work of maintaining Chromium packages for each distro, and making it easier for users of long-term stable branches to get important browser updates quickly and easily.