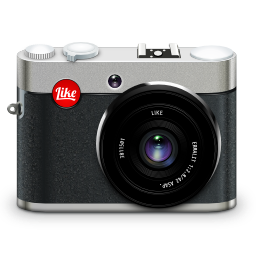 This is the third in my series of blog posts about the latest generation of GNOME application designs. In this post, I’m going to talk about Photos. Out of the applications I’ve covered, this is the one that has the most new design work.

One of the unique things about Photos is that it has been built from the ground up with cloud integration in mind. This means that you can use it to view photos from Facebook, Google or Flickr, as well as the images on your local machine. This is incredibly important for the future of the app, and is something we’d like to build on.

Until recently, we’ve focused on getting Photos into shape as a storage-agnostic Photo viewer and organiser. Now that it has matured in these areas, we’ve begun the process of filling out its feature set.

I’m starting with editing because work in this area is already happening. Photos uses GEGL, the GIMP’s next generation image processing framework, which means that there’s a lot of power under the hood. Debarshi has been (understandably) keen to make use of this for image editing.

For the design of Photos, we’re following one of the design principles drawn up by Jon for GNOME Shell: “design a self-teaching interface for beginners, and an efficient interface for advanced users, but optimize for intermediates”. This can be seen in the designs for photo editing: they are simple and straightforward if you are new to photo editing, but there’s also enough in there to satisfy those who know a few tricks.

We’re also following the other principles of GNOME 3 design: reducing the amount of work the user has to do, preventing mistakes where possible (and allowing them to be easily reversed when they do happen), prioritising the display of content, and using transitions effectively. 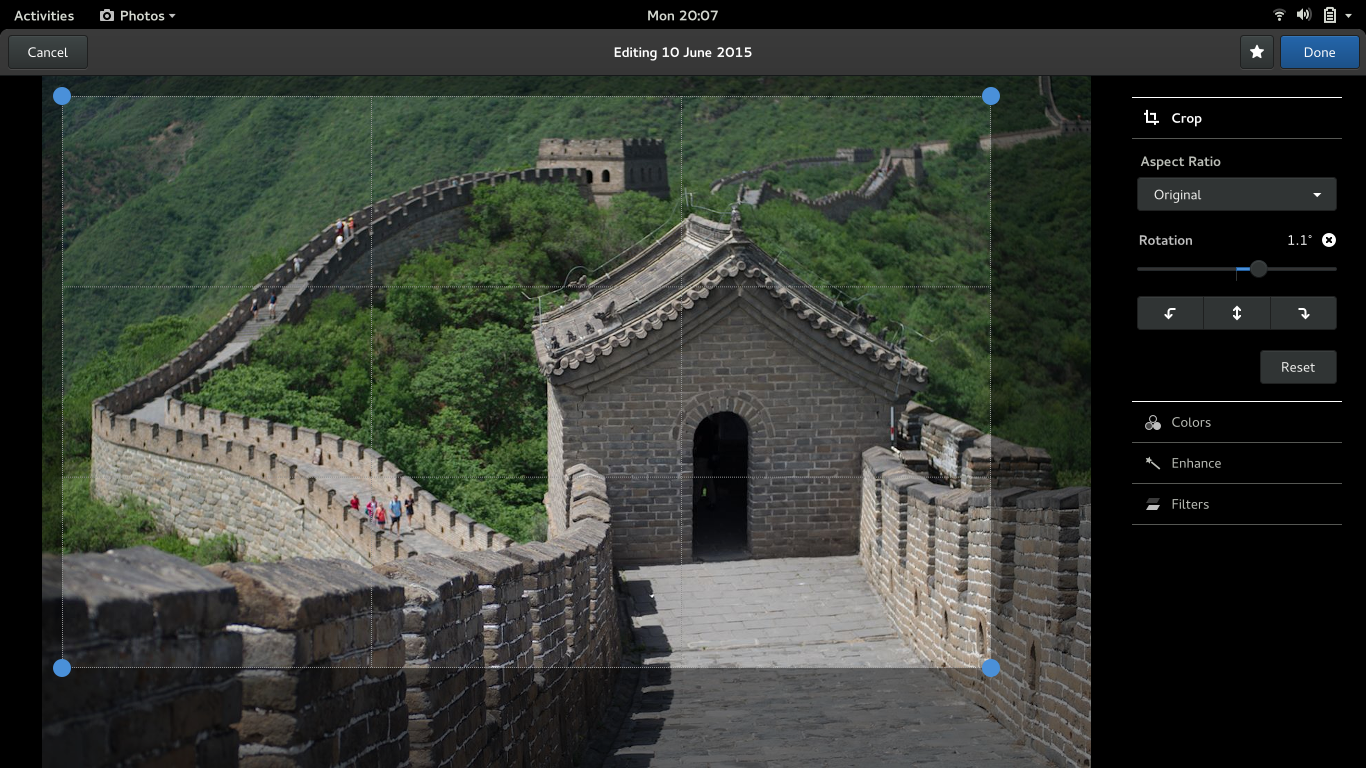 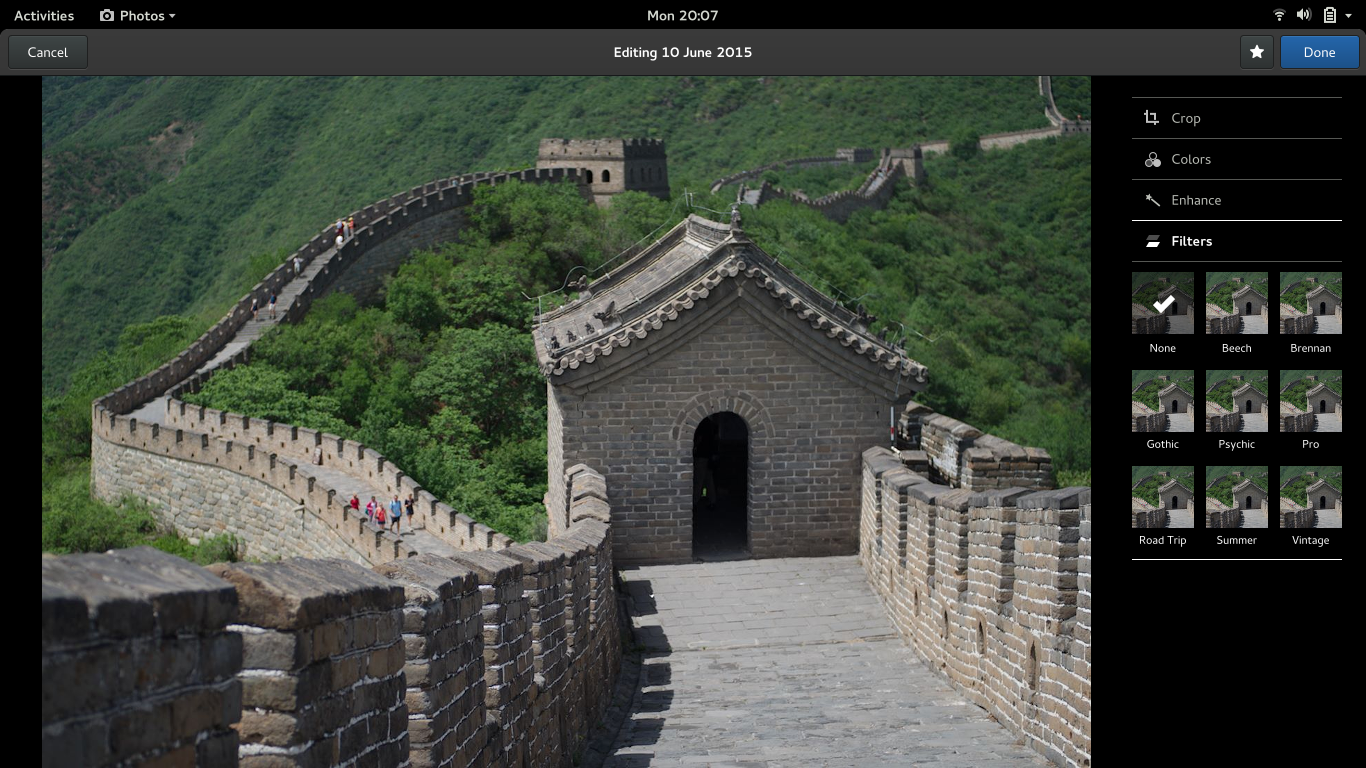 We also want editing to feel smooth and seamless, and are focusing on getting the transitions right. To that end, Jakub has been working on motion mockups.

There’s already a branch with Debarshi’s editing work on it, for those who want to give it a try. The usual caveat applies: this is work in progress.

As I mentioned, Photos already has cloud support. This solves the problem of getting photos into the Photos app for many people – if you are shooting with an Android phone, images can be synced to the cloud and will magically appear in GNOME.

However, if you are one of those old-fashioned types who shoots with an actual camera, you have to manually copy images over from the device, and this is labour intensive and error prone. We want a much more convenient and seamless experience for getting images from these devices onto your computer.

The initial designs for importing photos from a device are deliberately simple: generally speaking, all it should take is a single click to import new shots.

One important aspect of this design is that we want it to be error-proof. There’s nothing worse than realising that you forgot to copy over images and then blanked the SD card they were stored on – we want to prevent this from happening by shifting responsibility for maintaining the photo collection to the app.

Sharing is critical for a photos app, since sharing is often the primary reason we take a picture in the first place. It can take place through various means, including showing slideshows, but social media is obviously critical.

There are plans to equip GNOME with a system-wide sharing framework, which will allow posting to social media, and we’d like Photos to take advantage of that. However, sharing is so important for Photos that we don’t want to wait around for system-wide sharing to become available. 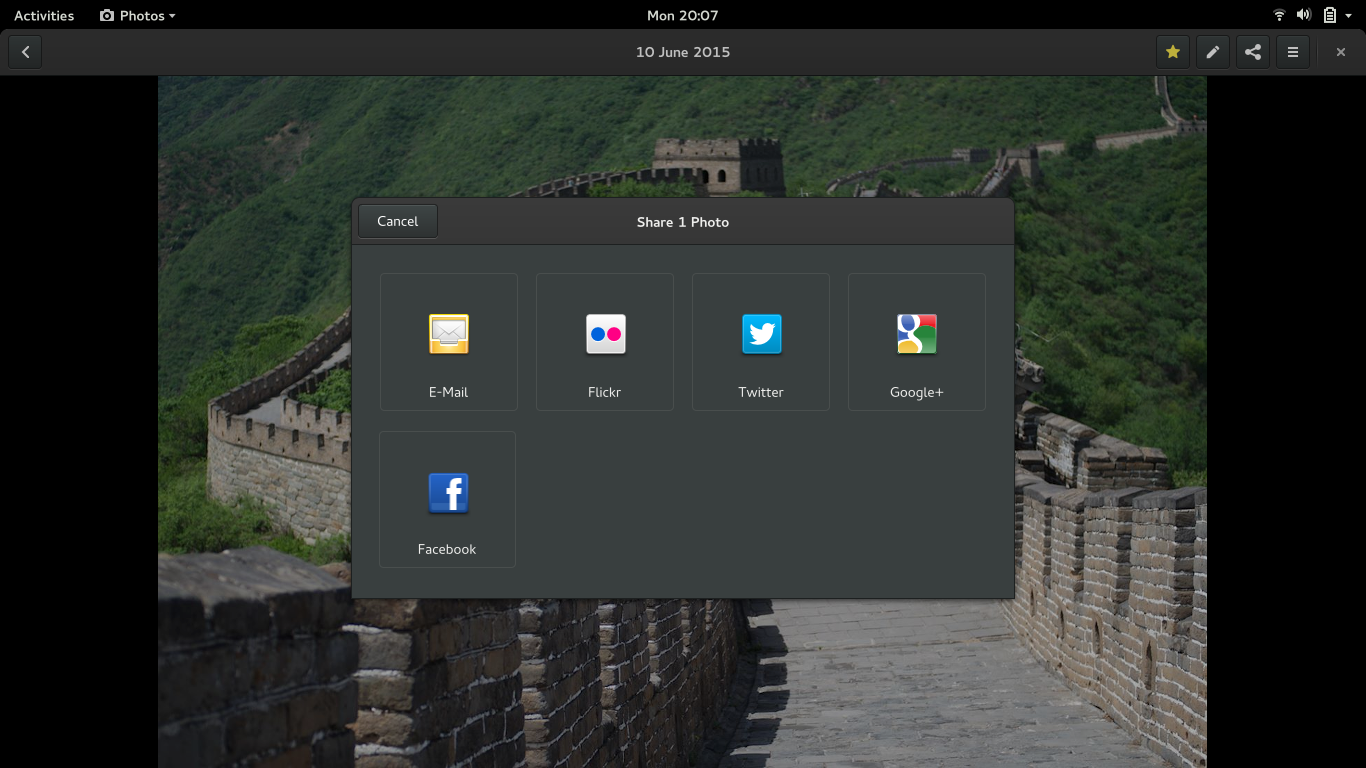 There are also wireframes and a bug report.

Aside from big new features like editing, import and sharing, we have other changes planned. The first is an improved photos timeline view: 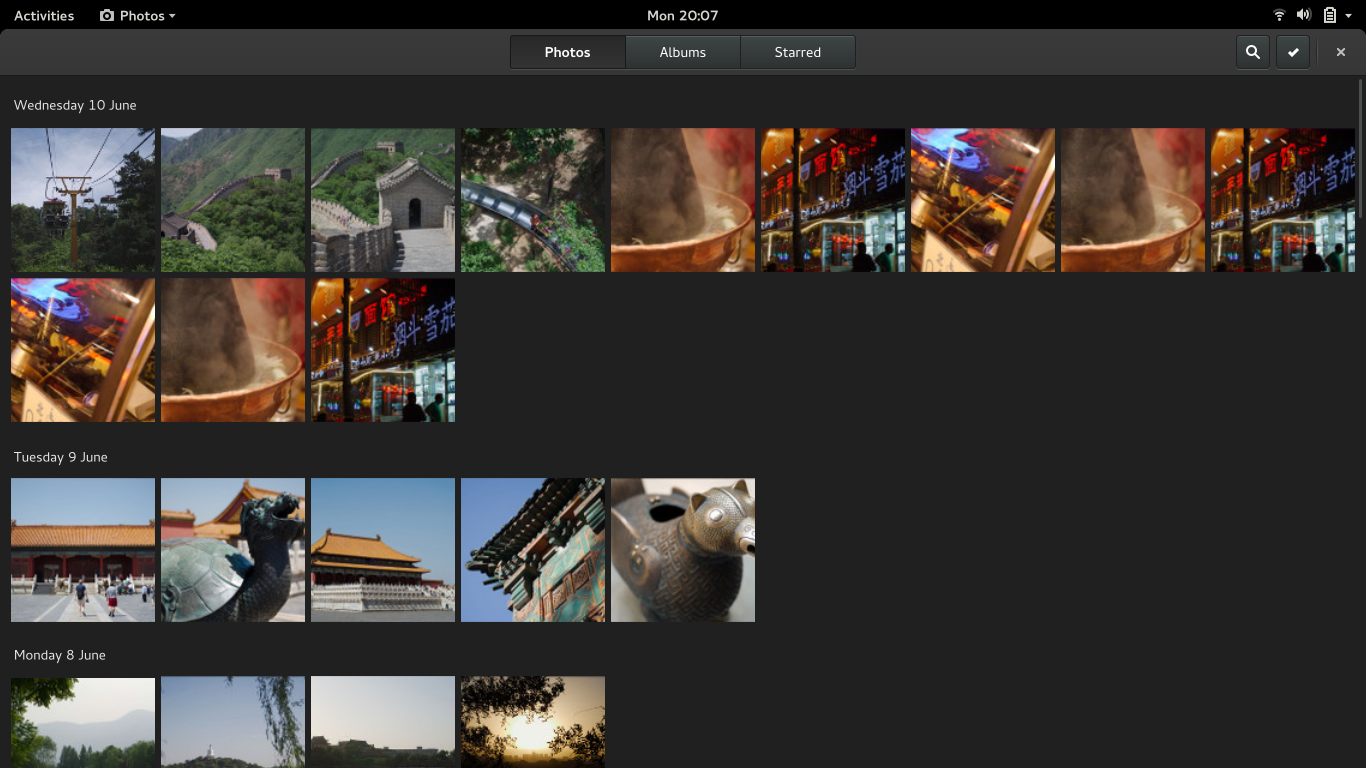 The main changes here are the addition of date headings, switching to square thumbnails, and hiding image titles. This is all intended to give you a less cluttered view of your photos, as well as clearer markers for navigation.

Another change that we have planned is a details sidebar. This is intended to provide a kind of organising mode, in which you can go through a series of photos and give them titles and descriptions, or assign them to different albums. 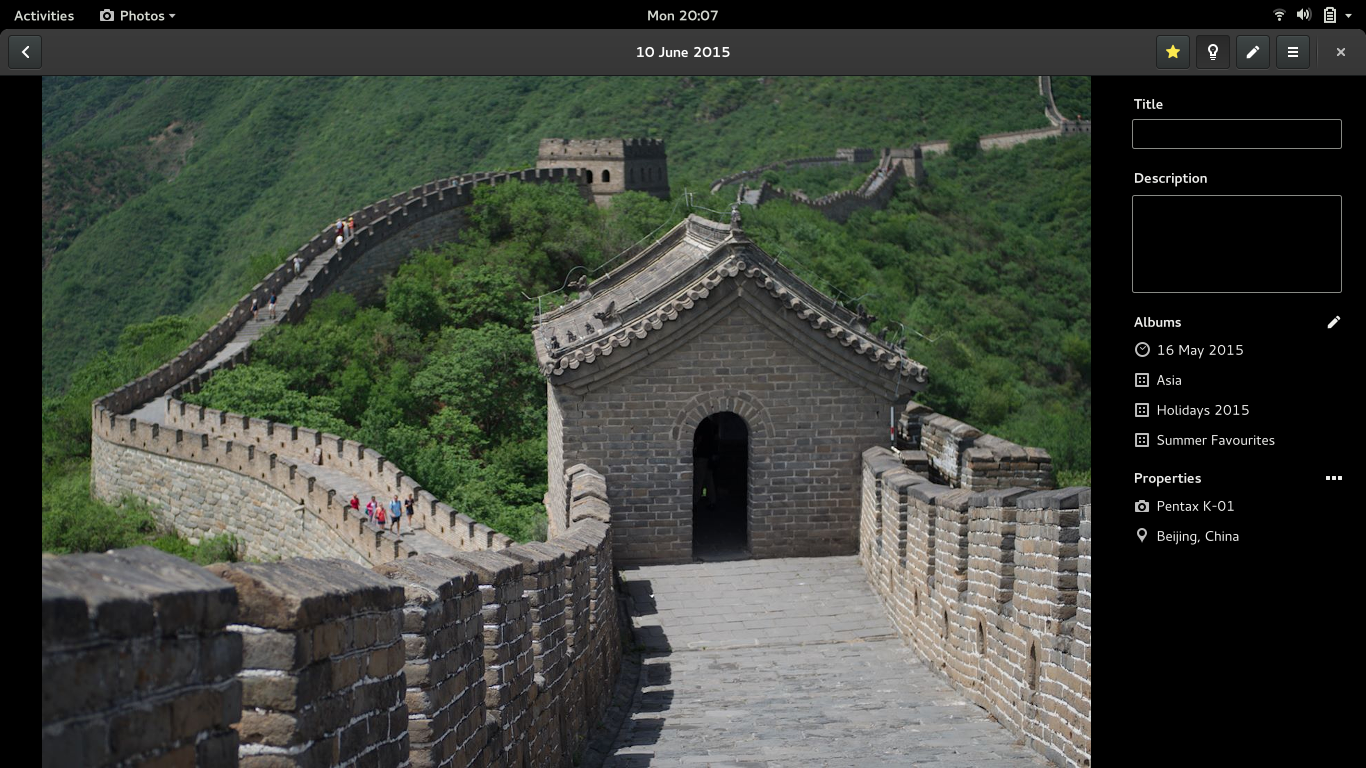 There’s already some cool work happening in Photos, and I’m pretty excited about the plans we have. If you want to help or get involved, there’s plenty to be done, but everything is clearly organised.

Bugs have been filed for all the new features and changes that I’ve mentioned in this post, and each one links to the relevant designs and mockups – you can find them listed on the Photos roadmap page.

Also, Debarshi (the photos maintainer), is happy to review patches, and Jakub and I are available for design discussion and review.