Last November we had a small hackfest in London, focused on GNOME Shell design. We explored various themes during the hackfest and came up with a bunch of initial designs, which we’ve subsequently been developing. The main area of recent work has been the login and unlock experience. The rest of this post gives an overview of the design that we’ve come up with.

Unlocking and logging into a device is something that people do a lot. Since people do it a lot, it’s important that the experience is smooth and doesn’t get in the way. However, it’s also important for it to look and feel really good. Login/unlock is the gateway to the rest of the experience. It is the public face of the product. It therefore needs to make a good impression and reinforce a positive relationship with the user.

This is one of the reasons why we’ve spent a fair bit of time on the design for login and unlock, as well as why we’ve involved a larger design team than usual. The hackfest that we had last year allowed us to bring extra designers in – people like Robin Tafel (Endless) and Cassidy James (System76/elementary OS) – as well as to work more closely with new regular participants, like Tobias Bernard.

When we originally discussed login/unlock at the hackfest, we came up with a long list goals and objectives for the new design. Chief amongst these was the idea of making the lock screen frictionless, so that people can get to their session easily. We also wanted to add a little joy and delight to an experience that can sometimes feel a bit flat, and we wanted to improve the navigational aspects of the design, with a clear spatial model.

Finally, we wanted to improve how the login/unlock UI performs in different scenarios. the current design works reasonably well for a small number of users, but doesn’t perform great on single user machines, or on those with many users. We wanted to make sure that it scales.

Without further ado, mockups! Here’s what we currently have for the lock screen: 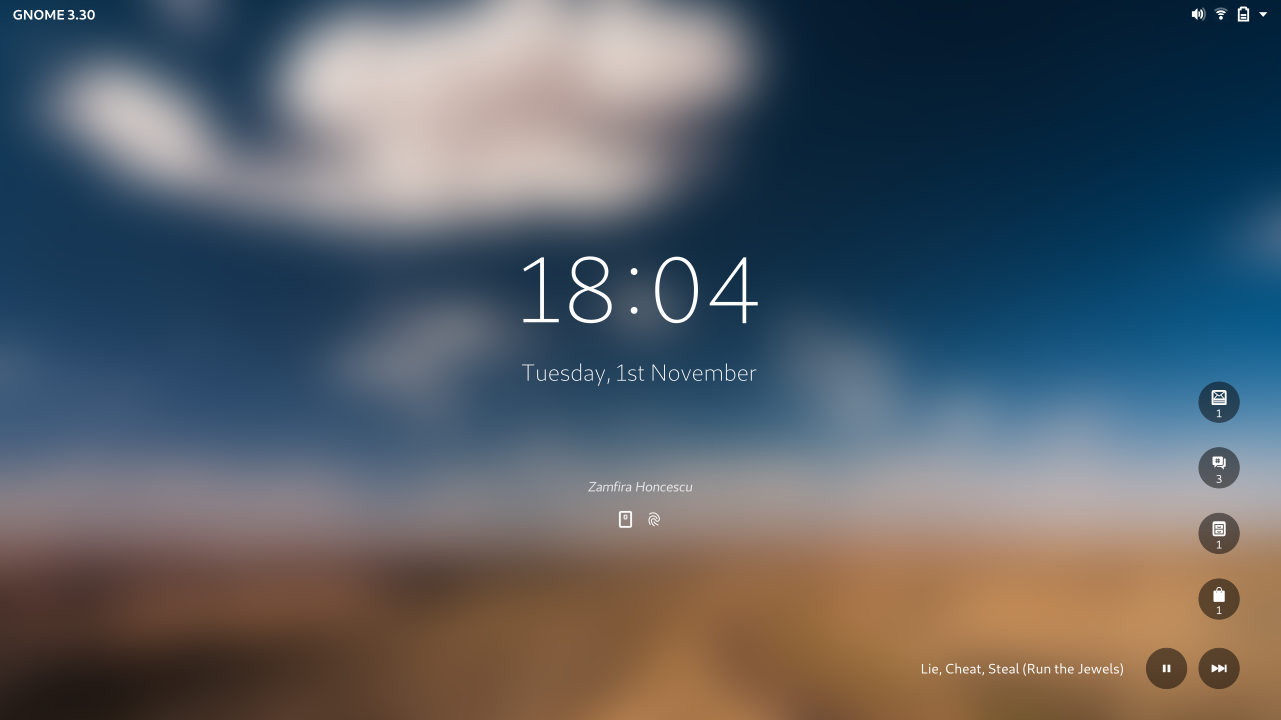 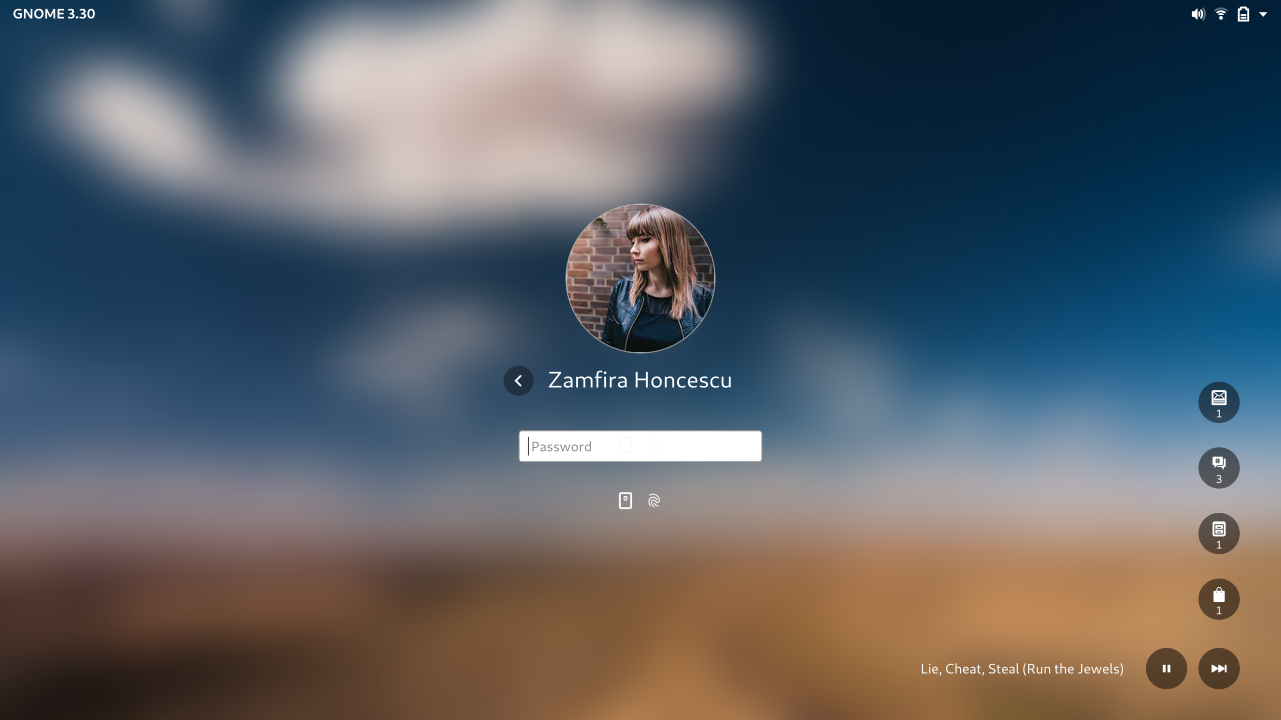 This motion mockup shows what the transitions would look like, going from the session, to a locked screen, and back to the session again:

As you can see, the existing “shield” concept has been retained – when you lock the device, a layer appears to slide down over the content. This slides up when the system is unlocked. We’ve tried to hold on to some of the character of the existing design, particularly with the centered time and date, so it is identifiably the same product as before.

So what’s changed? Here are some of the main things:

There are a number of other smaller changes too, which I won’t go into here, although I’m obviously happy to answer questions, and there’s also more information on the design page.

The other major part of the design is the user selection screen. This can be accessed from the lock screen as well as the session, and is used when switching user. The existing implementation uses a fairly simple list of users. We’ve given this a fairly thorough overhaul as part of the new design: 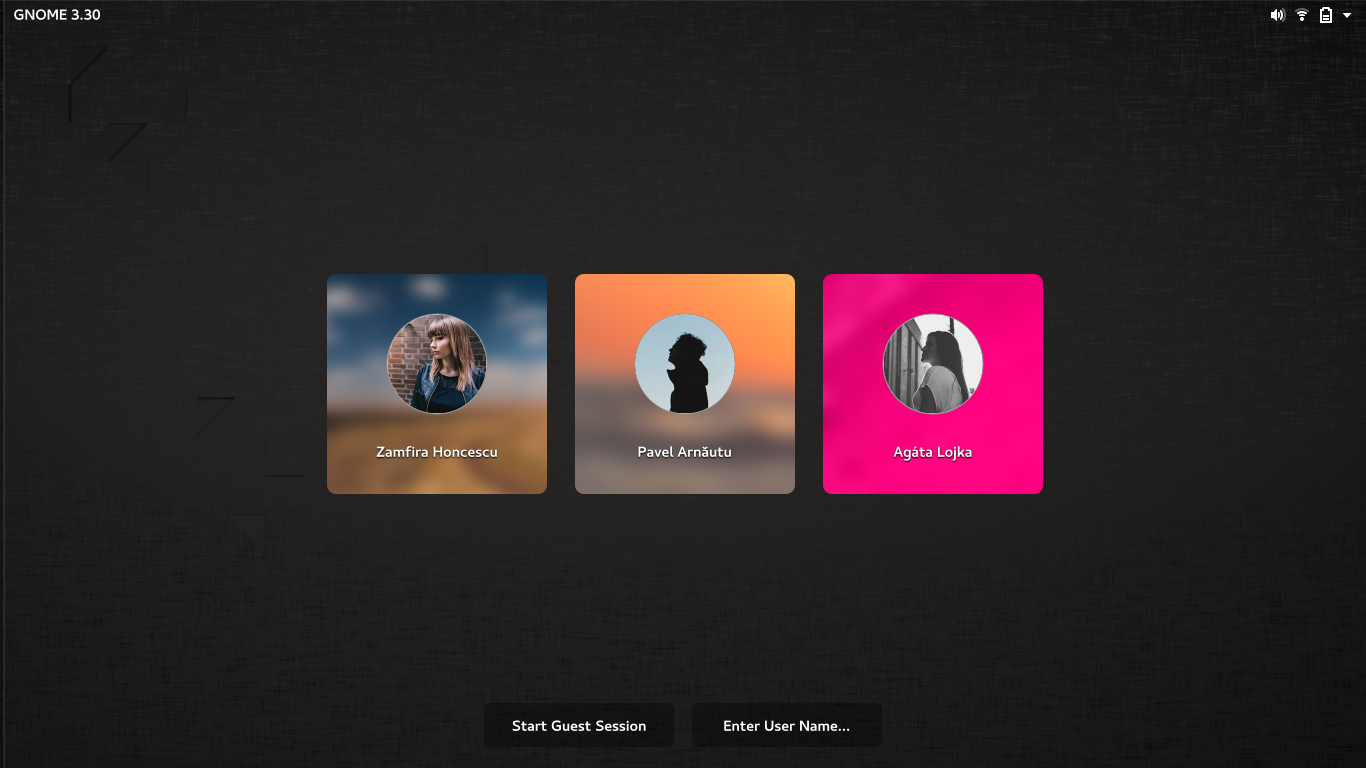 There’s also a motion mockup, which shows the transition from boot to login to user selection:

As you can see, the new design uses a grid of tiles, each of which features a blurred version of the user’s wallpaper. These are a key part of the spatial model for login. This allows users to orient themselves and contextualises navigation.

The user grid is designed to scale, so that it works well with large numbers of users. There’s also a simple username entry screen that can be used on deployments where a grid of user accounts might not be appropriate.

We’re hoping that work on implementing the designs will start soon, and it would be great if anyone wants to help make them a reality. That said, the designs aren’t set in stone, and we expect them to continue to evolve as we get feedback and as implementation takes place. Hopefully we’ll get chance to do some user testing on them too, before they land in a stable version.

Questions and comments are welcome.

38 thoughts on “Redesigning the lock screen”