VP9 is a bit of a paradox: it offers compression well above today’s industry standard for internet video streaming (H.264 – usually created using the opensource encoder x264), and playback is widely supported by today’s generation of mobile devices (Android) and browsers (Chrome, Edge, Opera, Firefox). Yet many companies and people are wary of using VP9. I’ve blogged about the benefits of VP9 (using Google’s encoder, libvpx) before, and I keep hearing some common responses: libvpx is slow, libvpx is blurry, libvpx is optimized for PSNR, libvpx doesn’t look visually better compared to x264 encodes (or more extreme: x264 looks much better!), libvpx doesn’t adhere to target rates. Really, most of what I hear is not so much VP9, but more about libvpx. But this is a significant issue, because libvpx is the only VP9 software encoder available.

To fix this, we wrote an entirely new VP9 encoder, called Eve (“Efficient Video Encoder”). For those too lazy to read the whole post: this VP9 encoder offers 5-10% better compression rates (for broadcast-quality source files) compared to libvpx, while being 10-20% faster at the same time. Compared to x264, it offers 15-20% better compression rates, but is ~5x slower. Its target rate adherence is far superior to libvpx and comparable to x264. Most importantly, these improvements aren’t just in metrics: the resulting files look visually much better than those generated (at the same bitrate) by libvpx and x264. Don’t believe it? Read on! 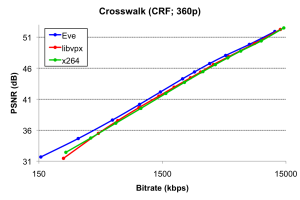 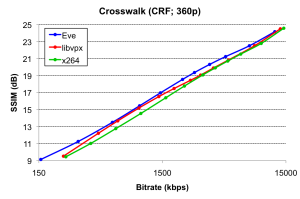 Some people object to using PSNR as a quality metric, so I measured the same files using SSIM as a metric. The results are not fundamentally different: Eve is 8.9% better than libvpx, and 22.5% better than x264. x264 looks a little worse in these tests than in the PSNR tests, and that’s primarily because x264 does significant metric-specific optimizations, which don’t (yet) exist in libvpx or Eve. However, more importantly, this shows that Eve’s quality improvement is independent of the specific metric used. 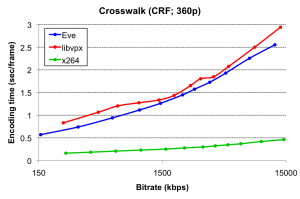 Lastly, I looked at encoding time. Average encoding time for each encoder depends somewhat on the target quality point. For most bitrate targets, Eve is quite a bit faster than libvpx. Overall, for an average (across all CRF values and test sequences) encoding time of about 1.28 sec/frame, Eve is 0.30 sec/frame faster than libvpx (1.58 sec/frame). At 0.25 sec/frame, x264 is ~5x faster, which is not surprising, since H.264 is a far simpler codec, and x264 a much more mature encoder. 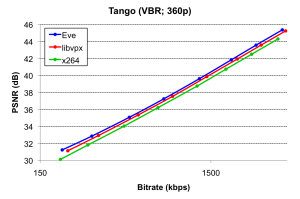 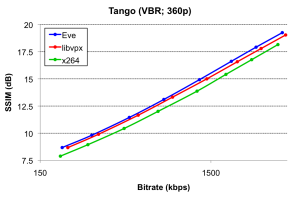 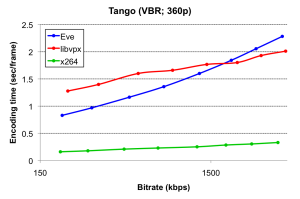 For an average encoding time of around 1.26 sec/frame, Eve is approximately 0.31 sec/frame faster than libvpx (1.57 sec/frame), which is similar to the CRF results. At 0.20 sec/frame, x264 is again several times faster than either Eve or libvpx, for the same reasons as explained in the CRF section. 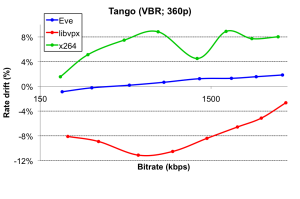 In terms of target bitrate adherence, Eve and x264 adhere to the target rate much more closely than libvpx does. Expressed as average absolute rate drift, where rate drift is target / actual – 1.0, Eve misses the target rate on average by 2.66%. x264 is almost as good, missing the target rate by 3.83% at default settings. Libvpx is several times farther off, with an average absolute rate drift of 9.48%, which confirms libvpx’ rate adherence concerns I’ve heard from others. Each encoder has options to curtail the rate drift, but enabling this option costs quality. If I curtail libvpx’ rate drift to the same range as x264/Eve (commandline options: --undershoot-pct=2 --overshoot-pct=2; table below: RRD), it loses another 3.6% in quality, at which point Eve requires 11.3% less bitrate to accomplish the same quality, with a rate drift of 3.33% for libvpx. 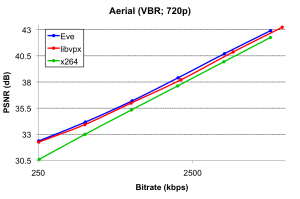 Most people in the US watch video at resolutions much higher than 360p nowadays, so I repeated the VBR tests at 720p to ensure consistency of the results at higher resolutions. Compared to libvpx, Eve needs 5.5% less bits to accomplish the same quality. Compared to x264, Eve needs 20.4% less bits. At 5.09 sec/frame versus 5.52 sec/frame, Eve is 0.43 sec/frame faster than libvpx, with the strongest gains at the low-to-middle bitrate spectrum. At 0.76 sec/frame, x264 is several times faster than either. In terms of bitrate adherence, Eve misses the target rate by 1.82% on average, and x264 by 1.65%. libvpx, at 8.88%, is several times worse. To curtail libvpx’ rate drift to the same range as Eve/x264 (using --undershoot-pct=2 --overshoot-pct=2), libvpx loses another 2.9%, becoming 8.4% worse than Eve at an average absolute rate drift of 1.50%. Overall, these results are mostly consistent with the 360p results. 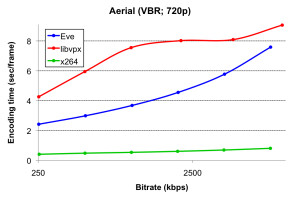 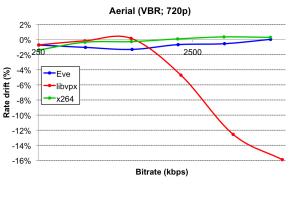 The most-frequent concern I’ve heard about libvpx concerns visual quality. It usually goes like this: “the metrics for libvpx are better, but x264 _looks_ better!” (Or, at the very least, “libvpx does not look better!”) So, let’s try to look at some of these (equal bitrate/filesize) videos and decide whether we can see actual visual differences. When doing visual comparisons, it should be obvious why effective rate targeting is important, because visually comparing two files of significantly different size is quite meaningless.

For this comparison, I picked three files: one where Eve is far ahead of libvpx (BarScene), one where the two perform relatively equally (BoxingPractice), and one which represents roughly the median across the files in this test set (SquareAndTimelapse). In each case, the difference between Eve and x264 is close to the median. For target rate, I picked values around 200-1000kbps, with visual optimizations (i.e. no --tune=psnr). Overall, this gives reasonable visual quality and is typical for internet video streaming at this resolution, but at the same time allows easy distinction of visual artifacts between encoders. For higher resolution, you’d use higher bitrates, but the types visual artifacts would not change substantially.

Overall, we start seeing a pattern in these artifacts: at comparable file sizes and frame sizes, compared to Eve, libvpx is blurry, and x264 suffers from high-frequency noise artifacts at sharp edges and has issues with skin textures. Both x264/libvpx also have significantly more color-artifacts compared to Eve: x264 tends to lose color and libvpx often bleeds colors. Eve – although obviously not perfect – looks visually much more pleasing, at the same frame size and file size.

Eve is a world-class VP9 encoder that fixes some of the key issues people have complained about with libvpx. Here, I tested the encoder at 360p and 720p using broadcast-style settings, where one encoded file is streamed many, many times, and therefore slow encoding times (1 sec/frame) are acceptable. At these tested CRF/VBR settings, Eve:

At Two Orioles, we are working to further improve Eve’s quality and speed every day, and lots of work can still be done (e.g.: faster encoding modes, multi-threading). At the same time, we would love to help you use VP9 for internet video streaming. Do you stream lots of video, and are you interested in trying out VP9 or improving your VP9 pipeline using Eve? Contact us, or see our website for more information.