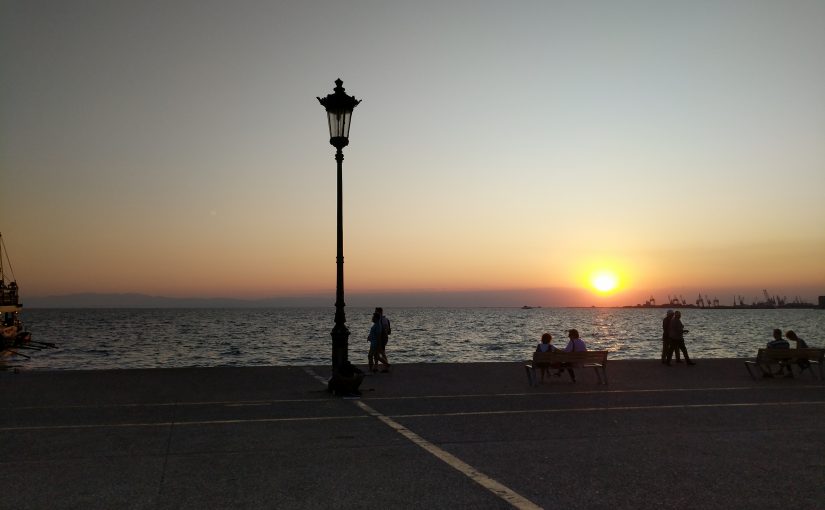 Last week I was in Thessaloniki (Greece) for this year’s GUADEC. This time I took vacations before the conference, visiting Athens and Delphi among other places, before coming to Thessaloniki.

I made an effort to see more talks this year, because there were so many interesting ones. Kudos to the speakers and organizers for getting such an excellent program together! Among my favorites were Allan’s talk on UX strategy and tactics, Cassidy’s about his research on dark styles, and Deb Nicholson’s closing keynote on building a free software utopia.

On Sunday I gave a talk about adaptive patterns and making GNOME apps that work well across form factors, from phones all the way to desktops. There is a video of my talk, and the slides are here.

I spent most of Monday in the GTK BoF, where we discussed (among other things) menus, dark styles, upstreaming Libhandy widgets, and a new pattern library for GNOME. Since there were so many app maintainers in the room, we inevitably also talked about random things in various apps, such as the Mouse/Touchpad settings, the Display settings, and Evince.

One of the things we’ve talked a lot about recently on the GNOME design team is making it easier to implement our UI patterns.

Many of the platform widgets are in GTK directly, which makes them easy to use, but hard to iterate on since we don’t want to break API there. Other things are in third party libraries, such as Libzazzle or Libhandy, but those are not “official”, and app developers have to know about them. Other widgets are just copy-pasted between apps, or completely custom everywhere. This makes it needlessly complex to follow our design guidelines, and has resulted in inconsistency in how different apps implement patterns. One idea to fix this was to have a separate official pattern library, and a new widget factory that showcases these patterns. This library could move significantly faster than GTK, and its release cycle could be better aligned with GNOME.

On a parallel track we’ve also been discussing for some time (both within Purism and GNOME) how best to upstream the widgets in Libhandy. Some of the things in there are fairly generic and should go into GTK (e.g. HdyColumn), but since GTK3 is stable we can’t upstream them directly before GTK4. Other widgets are more GNOME-specific (e.g. HdyPreferencesWindow), and would ideally be able to move at a faster speed, so a separate library would be a better fit.

We discussed this at length over the course of GUADEC, and this seems like the most likely way forward: For GTK4 we’ll have a separate GNOME pattern library outside GTK, which contains “official” widgets implementing patterns from the GNOME HIG. Some of these widgets would come from currently separate libraries such as Libhandy, while others might be moved out of GTK (e.g. GtkShortcutsWindow). The new library would have a clearly defined inclusion/review process for new widgets, and would be kept in sync with the HIG.

For GTK3 it seems like the path of least resistance is to just adopt Libhandy upstream, after removing a few things that are too specific or no longer needed (e.g. HdyDialer and HdyArrows), and instituting the same review process for new widgets as for the GTK4 library.

It’s still early days for all of this, but this is the current consensus as I understood it from various conversations at GUADEC.

On Tuesday we had a BoF with various interested parties (including design team, distros, and app developers) to discuss a possible future Vendor Styles API.

GNOME does not currently support making changes to the platform stylesheet/icons, and app developers build their apps with this in mind. Changing these means ripping out API from under developers, which often results in apps looking broken. Some downstreams are doing it however, which is a problem for our overall platform developer story.

The good news is that some of these downstreams realize this is an issue, and are willing to work upstream to improve the situation. During the BoF we discussed the motivations for changing the platform style, and the kinds of changes they’re interested in. We broadly categorized these changes in 3 groups:

We spent most of the BoF discussing the “Accent Colors” category, because that’s where most of the low-hanging fruit is. The main things we need to figure out for this are

We discussed most of these questions in some detail, but all of this needs a lot more work before we can definitively say if and how we’ll go forward with it. At the BoF we outlined some first steps in this direction, namely documenting the current set of color variables within Adwaita, and looking at what other variables we might need. For more on this read the Discourse topic.

Once all of that is figured out though, there are some pretty exciting things on the horizon. For example, some third party app developers would like to use color in more interesting ways in their apps, but the way Adwaita is set up, this is currently not easy. If done right, making Adwaita more flexible would not only allow for vendor styles, but also empower app developers to do more cool stuff.

Another potential benefit is that a lot of the work around ensuring contrast on different background colors, better documentation around color variables, etc. would be needed anyway if we get a global “prefer dark” preference. If and when that happens, it will be a much easier transition if we’ve already worked out some of these things.

I also sat down with François on Tuesday to discuss the software ethics rating system we’ve been thinking about for a while. The goal of this initiative is to make the value of software freedom more tangible to people when they’re looking for applications in an app store (e.g. “this app won’t leak your data” instead of “this app is licensed GPLv3+”). On the developer side, the goal is to encourage ethical practices (e.g. encryption) and discourage unethical ones (e.g. tracking). So far we’ve mostly discussed this idea internally at Purism, but as with everything else we’d ideally want it to be a ecosystem-wide thing others can benefit from rather than something we do downstream.

There’s plenty of relevant art for nudging people towards more ethical choices. In other industries there are many examples for both info badges/warnings (e.g. food labels with nutritional information) and indirect incentives (e.g. higher taxes on unhealthy foods). In the software realm, interesting examples include FDroid’s anti-feature warnings, and Terms of Service; Didn’t Read, which has curated summaries and letter grades.

In our case we have limited options in the short term, because we have to deal with multiple different software sources (someone might have apps from a distribution repo, multiple Flatpak remotes, and who knows what else). In addition to that, giving a simple answer to the question “Is this app safe to use?” is often complicated and somewhat subjective. For example, it’s impossible to build an email client that doesn’t send unencrypted messages, or an RSS app that doesn’t connect to servers which could track you. Does that mean we should mark these apps as insecure/unethical?

There currently isn’t a trusted entity which could make the complex value judgements that are involved with deciding whether applications are ethical at scale, for many different software sources.

My feeling is that instead of coming up with a complicated process that may or may not work the way we expect it to, it would be good to first experiment with some leaner solutions and test the general approach. A potential first step we discussed could be something similar to the anti-features on FDroid, perhaps tied in with the existing Appstream metadata we have. In combination with Flatpak sandboxing/permissions there are a number of cases where you can actually say with relative certainty that an app is safe/ethical without complicated judgement calls (e.g. fully sandboxed apps without network access). If we can find a few such categories of apps this could be a good starting point, to see if this helps us reach our goals.

Obviously this needs a lot more work, but I’m hoping to do at least some mockups/prototypes soon. Also, I haven’t talked to a ton of people about this so far, but I imagine other projects with a focus in software freedom/ethics might be interested in this problem as well. If you work on such a project and have ideas/comments/concerns, let’s chat!

After 5 intense days of GUADEC and BoFs we had a more chill day at the beach on Wednesday. We still had lots of productive discussions about GNOME stuff there of course, maybe even better in some ways because we didn’t have our laptops distracting us :)

I’d like to thank the organizers for putting together an awesome GUADEC, all of my GNOME friends old and new for being there, and the GNOME Foundation for sponsoring my attendance!