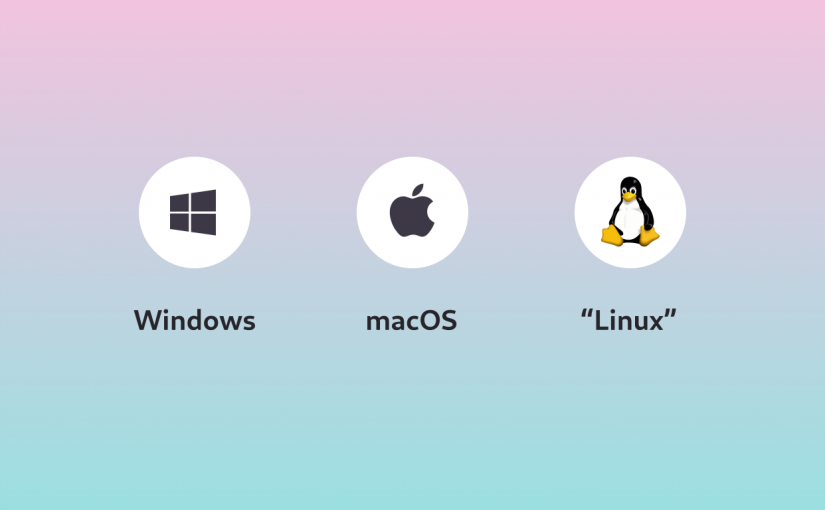 This is part 1 of a series of blog posts based on the talk Jordan Petridis and I gave at LAS 2019 in Barcelona. Read part 2 here.

In our community there is this idea that “Linux” is the third platform next to Windows and macOS. It’s closely connected to things like the “year of the Linux desktop”, and can be seen in the language around things like Flatpak, which bills itself as “The Future of Apps on Linux” and the Linux App Summit, which is “designed to accelerate the growth of the Linux application ecosystem”.

But what does that actually mean? What does a healthy app ecosystem look like? And why don’t we have one?

I think the core of the problem is actually the layer below that: Before we can have healthy ecosystems, we need healthy platforms to build them on.

What is a Platform?

The word “platform” is often used without a clear definition of what exactly that entails. If we look at other successful platforms there are a ton of different things enabling their success, which are easy to miss when you just look at the surface.

On the developer side you need an operating system developers can use to make apps. You also need a developer SDK and tooling which are integrated with the operating system. You need developer documentation, tutorials, etc. so people can learn how to develop for the platform. And of course once the apps are built there needs to be an app store to submit them to.

Developers can’t make great apps all by themselves, for that you also need designers. Designers need tools to mock up and prototype apps, platform UI patterns for things like layout and navigation, so every app doesn’t have to reinvent the wheel, and a visual design language so designers can make their app fit in with the rest of the system visually. You also need Human Interface Guidelines documenting all of the above, as well as tutorials and other educational resources to help people learn to design for the platform.

On the end user side you need a consumer OS with an integrated app store, where people can get the great apps developers make. The consumer OS can be the same as the developer OS, but doesn’t have to be (e.g. it isn’t for Android or iOS).  You also need a way for people to get help/support when they have problems with their system (whether that’s physical stores, a help website, or just easily google-able Stackoverflow questions). 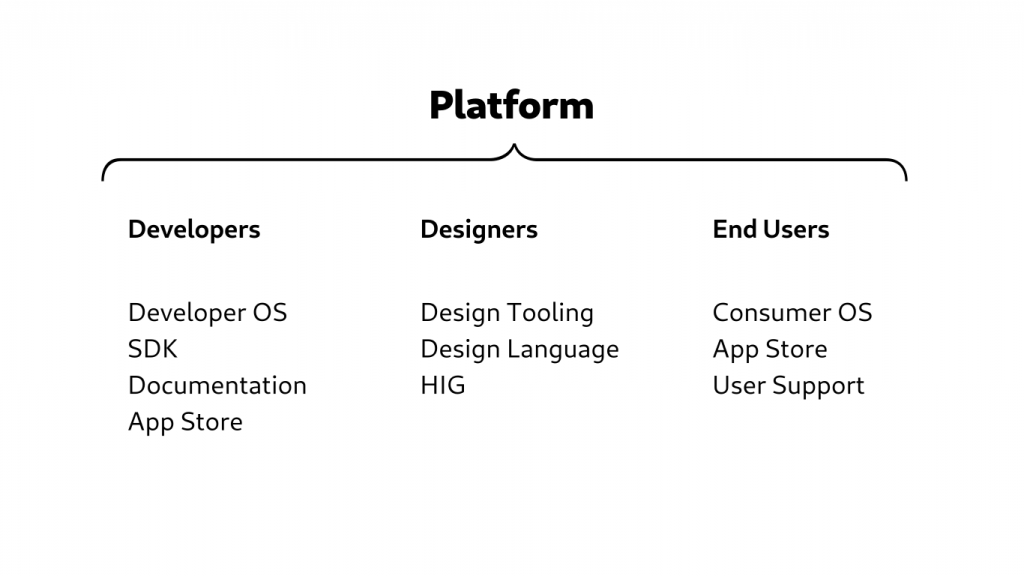 That’s a lot of different things, but we can group them into four major pieces which are needed in order for something to be a real platform:

So if we look at the free software world, where are the platforms?

What about “Desktop Linux”, which is what people usually mean when they say “Linux”? The problem is that this term doesn’t have a clear definition. You could take it to mean “FreeDesktop.org”, but that also doesn’t come close to being a platform. FreeDesktop is a set of standards that can be used to build platforms (and/or ensure some level of compatibility between different platforms). Endorsement of a single platform or set of technologies goes directly against FreeDesktop’s aims, and as such it should only be thought of as the common building blocks platforms might share.

What about distributions? Ubuntu is one of the most popular ones, and unlike others it has its own app store. It still isn’t a platform though, because it doesn’t have the most critical pieces: a developer SDK/technology stack, and a design language.

Other distributions are in a similar but worse position because they don’t have an app store.

GNOME is the most popular desktop stack, and it does have an SDK and design language. However, it only sort of has an app store (because GNOME people work on Flathub), and it doesn’t have an OS. Many distributions ship GNOME, but they are all different in various ways (more on this later), so they don’t provide a unified development target.

Interestingly, the only project which currently has all the pieces is elementary. It has an OS, an SDK, a HIG, and an app store to submit apps to. The OS is largely Ubuntu and the technology stack largely GNOME, but it develops its own desktop and apps on top of that, and does the integration work to make it into a complete consumer product.

This begs the question, why is elementary the only one?

The Means of Distribution

The reasons for this are largely historical. In the early days, free software desktops were a bunch of independently developed components. They were not necessarily designed for each other, or well integrated. This meant in order to have a usable system, someone needed to curate these components and assemble them into an operating system: The first distributions were born.

Over the last decades this landscape has changed drastically, however. While GNOME 1 was a set of loosely coupled components, GNOME 2 was already much more cohesive and GNOME 3 is now essentially an integrated product. The shell, core apps, and underlying technologies are all designed with each other in mind, and provide a complete OS experience.

Desktops like GNOME have expanded their scope to cover most of the responsibilities of platforms, and are in effect platforms now, minus the OS part. They have a very clear vision of how the system should work, and app developers target them directly.

The elementary project has taken this development to its logical end point, and made its own vertically integrated OS and app store. This is why it’s the only “real” platform in the free software space at the moment.

Distributions, on the other hand, have not really changed since the 90s. They still do integration work on desktop components, package system and applications, set defaults, and make UX decisions. They still operate as if they’re making a product from independent components, even though the actual product work is happening at the desktop layer now.

This disconnect has led to tensions in many areas, which affect both the quality of the system user experience, and the health of the app ecosystem. 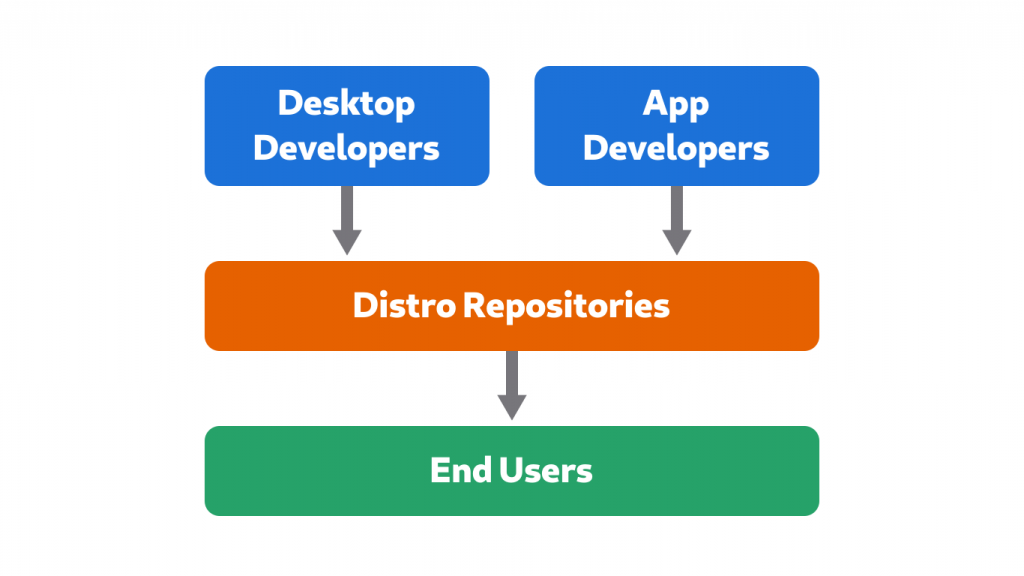 Grievances with the distribution model, which affect both app and desktop developers, include:

The reason for a lot of these issues is the incentives on the distribution side. Distributions are shipping software directly to end users, so it’s very tempting to solve any issues they find downstream and just ship them directly. But because the distributions don’t actually develop the software this leads to a number of other problems:

The Endless OS shell is a great example of this. They started out with vanilla GNOME Shell, but then added ever more downstream patches in order to address issues found in in-house usability tests. This means that they end up having to do huge rebases every release, which is a lot of work. At the same time, the issues that prompted the changes do not get fixed upstream (Endless have recently changed their strategy and are working upstream much more now, so hopefully this will get better in the future).

This situation is clearly bad for everyone involved: Distributions spend a ton of resources rebasing their patches forever, app developers don’t have a clear target, and end users get a sub-par experience.

So, what could we do to improve this? We’ll discuss that in part 2 of this series :)