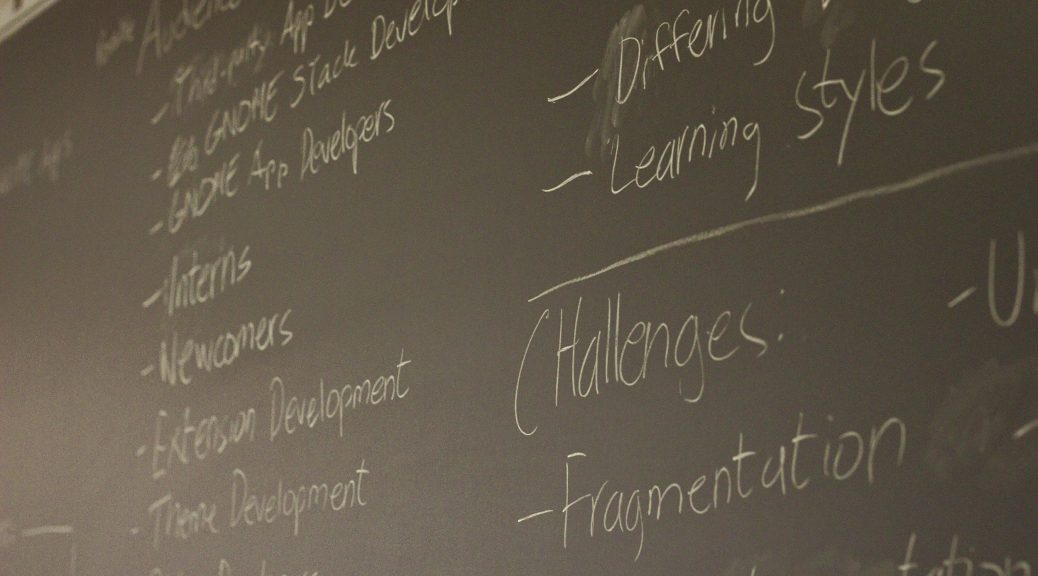 This is Part 2 of a blog post series summarizing the Developer Center BoF. See also Part 1: The Developer Experience.

Hi Again! As promised I will now cover our discussion of possible audiences at the GUADEC Developer Center BoF.

“Developers” can mean many things. There are several subclasses of developers we need to take into consideration so we can decide how to scope the developer center. Deciding a primary audience will become important later to take design decisions and align our vision. Note that I say “primary” – to create a good developer experience we still need to ensure a good story for other audiences we care about. In this list, one person may fit into several audiences and all of the audiences will need to be well defined (e.g. with a description):

At this point we can start identifying some constraints which our users’ behavior and goals depends on:

We need to consider which of these we think is important in the short-term and in the long-term. Simultaneously, we need to consider the maintainability of the Developer Center and its content too. This is a list of possible audiences – eventually we should decide on short-term priorities.

Among the six attendees at the GUADEC BoF there was fairly wide interest in having the GNOME Developer Center cater to application developers and especially third party developers. I know that me and Carlos are also interested in having the developer center provide a good experience for newcomers, who share’s their unfamiliarity with GNOME technology and terminology with third party developers. In general, I think catering to application developers is a good approach as more users of our technologies benefit our ecosystem.

By knowing what our developer experience of (Part 1) and with the possible audiences in mind (Part 2) we can start consider what challenges our current experience encounters, which we ought to solve. I will cover this in my last part of this blog post series, Part 3: Challenges.

If you have any additions to the lists above or comments, let us know! Comment on this blog post or on the related Gitlab issue.