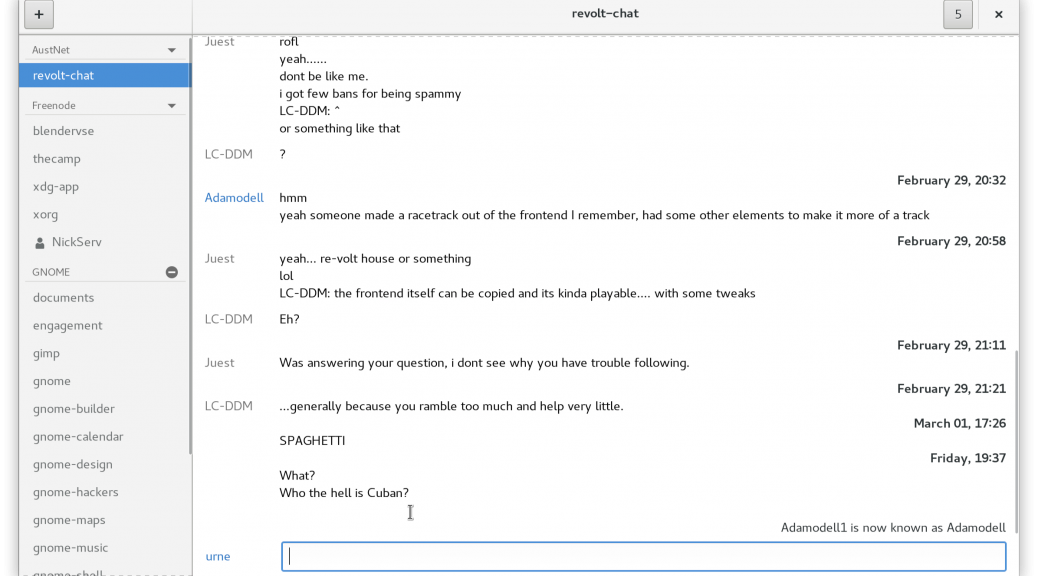 Yesterday was a big milestone for GNOME, as 3.20 landed. And just the day before Polari 3.20 was released. I have had a ton of fun this cycle designing and merging my GSoC work for Polari. Without further ado, I’ll now take you on an adventure showcasing what’s new in Polariland. 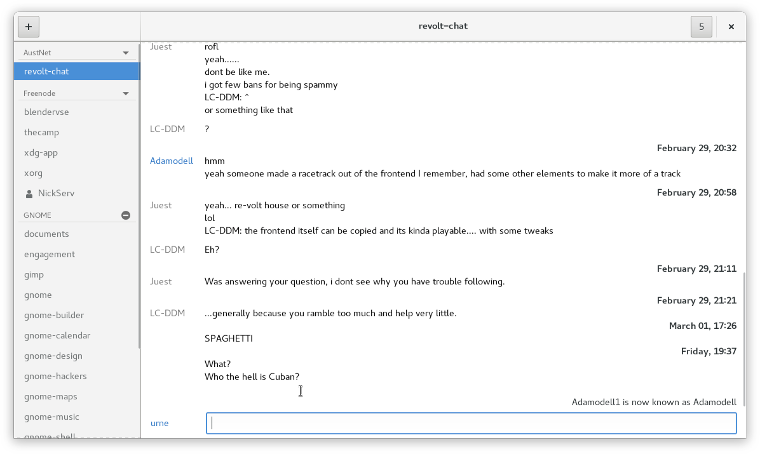 As part of Isabella Riberio’s Outreachy internship Polari now has a much better workflow for managing networks. Instead of a management dialog hidden away in the application menu, you can now access your networks directly from the sidebar. Much more intuitive.

Another new contributor, Kunaal Jain, implemented support for image pasting – a feature I use almost daily now. Florian complimented the enhanced image pasting by adding support for inline pasting. This way you can paste text and images and write text around the resulting URLs.

As part of the connection management overhaul Florian also made adding servers and joining rooms much faster. Polari now ships with a predefined list of networks which means you can get Polari set up in just a few clicks. Another nice advantage is that this enables us to connect more securely to the networks – SSL is enabled by default on all predefined networks which support it.

The small and cool details

Polari 3.20 also got a much needed visual overhaul near the entry area. Below is a comparison between the old entry area (top) and new entry area (bottom).

The overhauled look also meant changing your nickname now happens via a popover. There’s still some more work to do here as there’s not enough distinguishment between changing nicknames temporarily and changing nicknames permanently (something I hope to adress next cycle).

What I’m over-hyped the most about is this 2-line change – we now animate the text. It’s really incredible how such a small detail can make such a huge impact on my chatting experience.

A nice other detail is that Polari now tab-completes IRC commands.

During the ContentApps Hackfest my status compression branch from last years Google Summer of Code also landed in Polari 3.20.. 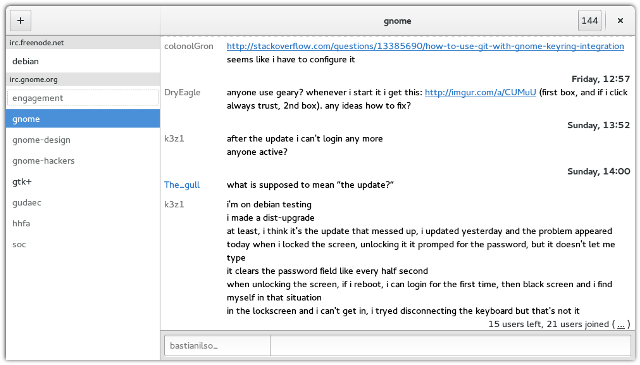 ..as well as my IRC URL Handling branch, which was further enhanced to match against the new list of predefined networks. Polari also detects mentions of chatrooms and linkifies them for your convenience.

Finally I want to higlight the new keyboard shortcuts Alt+Shift+up and Alt+Shift+down that Rares Visalom implemented this cycle. It’s a super addicting way of checking up on the new messages in various chatrooms.

It is most likely that Polari and other GNOME 3.20 apps haven’t reached your repository yet. XDG-App to the rescue! You can check out Polari nightly by following Alexander larssons tutorial at.
https://wiki.gnome.org/Projects/SandboxedApps/NightlyBuilds

In Polari we plan to participate in Google Summer of Code. If all goes well, we’ll have Kunaal and Rares work on implementing search and implementing a improved initil user experience. These are two milestones that I personally look much forward to achieve.

I would like to thank everyone involved with making this release of Polari so magnificent. Chat you later on IRC. (: