Flatpak development is not standing still. Here is a quick summary of recent and coming changes. 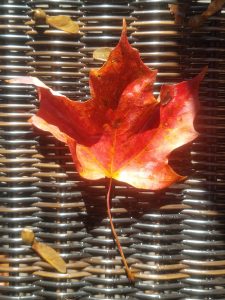 In 1.4.2, Flatpak gained the ability to use extra-data for extensions. This mechanism has been around for applications for a long time, but it is a new feature for extensions.

The 19.08 version of the freedesktop runtime uses it for its new org.freedesktop.Platform.openh264 extension, which uses the Cisco openh264 builds.

Since we are taking the ‘run everywhere’ aspect of Flatpak seriously, we’ve backported this feature from the 1.4 branch to older stable branches and released 1.2.4 and 1.0.9, so even users on very stable distributions can enjoy this new feature.

We’ve quietly started to work on Flatpak 1.6, which should be out before the end of the year.

On the roadmap for the this release, we have

Things are happening on the portal side too. Some of these have already landed, and will appear in a release soon.

We have a secrets portal now.  It works by providing a master secret to the sandboxed app, which is then used to store the applications secrets in an encrypted file inside the sandbox . The master secret is stored in the session keyring.

This is nice in that applications don’t leave their secrets behind in the keyring when they are uninstalled, and the application secrets are safe from others.

The backend for this portal will be provided by gnome-keyring and libsecret will automatically use it inside a sandbox. Backend implementations for other environments are more than welcome.

The secret portal is the work of Daiki Ueno, who gave a talk about it at Guadec.

The Flatpak commandline and tools like Discover or the Elementary app store do a fine job of handling updates for Flatpak apps and runtimes.

But the reality is that self-updating is a popular feature for applications, so we added an update portal that lets them do this in a clean way, with proper integration in the Flatpak machinery.

To implement this, the portal needs information from the compositor about open windows, and which applications they belong to. Currently, this is implemented for gnome-shell, other backends are more than welcome.

The screencast portal now lets you select individual windows, in addition to screens, if the application asks for this. 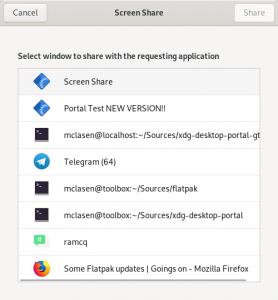 For now, the portal identifies windows by the application icon and window title. We are looking to improve this by using thumbnails.

We will add a small bit of desktop integration with a portal for setting desktop wallpapers.

In the ideal case, portal functionality is used transparently by existing desktop libraries without the need for apps to do anything special. Examples for this are GtkFileChooserNative using the file chooser portal, or libsecret using the new secret portal.

But for some portals, there is no natural library api, and in these cases, doing the portal interaction with D-Bus calls can be a bit cumbersome.

Therefore, we are working on a libportal library that will provide GIO-style async apis for portal requests.

If you want to get involved with Flatpak development, or are just curious, check out the flatpak project on github, chime in on the Flatpak mailing list, or find us on IRC in #flatpak on freenode.