This will be a longer post summarizing some of the discussions and decisions at the recent GTK+ hackfest in London. 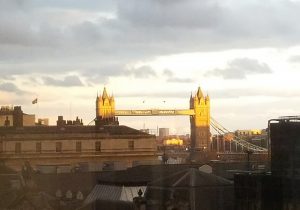 I’ve just released GTK+ 3.90, as a milestone on our way towards GTK+ 4. This post should explain not just what is or isn’t in that release, but also where we are on the journey towards GTK+ 4, and what changes are still in the pipeline.

The reason for doing a 3.90 release now and not just another 3.89.x milestone is that we want to encourage experimental ports of some GTK+ 3 applications at this point, to gather feedback.

If you want to do this for your application, you should be aware that we are not promising more than 6 month API stability yet. There are still a number of unfinished transitions and fundamental changes (such as dropping subwindows, or moving container APIs to GtkWidget) that can and will affect application APIs before GTK+ 4.

I am willing to do a few 3.90.x snapshots if there is interest, but you should also be prepared to keep your application building against GTK+ 3, since 3.90 may not be widely available in distributions.

We had a 3 productive days in London last week. The hackfest was a bit different from previous GTK+ get-togethers since we had a bigger and more diverse audience, which means that we had less down-in-the-details discussion about GTK+ internals. 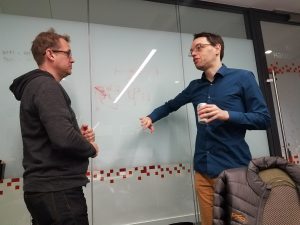 Instead, some of us spent time discussion portals, Flatpak, build services and other things – but I will focus on the GTK+ parts in this post.

The GTK+ discussion was sometimes a bit higher-level, with topics like graphics pipelines and how we use them in GSK, or constraints and how they can fit into the GTK+ layout machinery.

I’ve personally enjoyed this change of pace quite a bit, and hope we can repeat this style of event in the future. 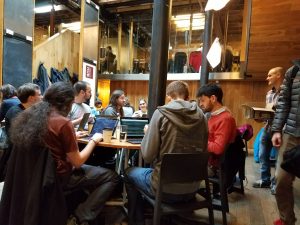 We spent a while reviewing how far we have come with rebasing the GTK+ rendering onto GSK (and thus, GL / Vulkan). I won’t go into excessive details here, but we have both a Vulkan and a GL renderer for GSK.

The Vulkan renderer has shader implementations for many of the performance-relevant elements of CSS that make up GTK+ widgets. One major omission is that we still don’t handle text natively and fall back to cairo rendering and texture upload for it. We decided to look at cogl-pango and lift the necessary texture atlas and pango renderer from there, as far as possible.

The GL renderer is much less complete, since Benjamin has focused on implementing things on the Vulkan side at first. The plan here is to finish the Vulkan side first and then port things over to GL. One difference between the backends that we discussed at some length is that while changing pipelines is cheap with Vulkan, that may not be the case on the GL side, so we may need an optimizing pass over the render node tree to minimize state changes. 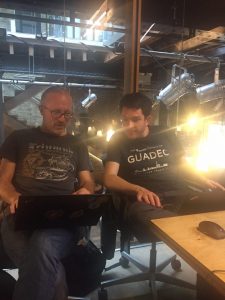 Emeus also supports Apple’s shorthand notation for constraints, so it should be familiar to many people who don’t have experience with GTK+’s nested boxes model. If we can integrate this in time for GTK+ 4, it could make a real difference for how GTK+ applications are designed and implemented.

In the discussion after the demo, we touched on questions of how we could possibly reimplement existing GTK+ containers in terms of constraints, and how we can take even more advantage of constraints by making Emeus composable.

Of course, there are questions of how far this approach will scale – could you put all of gtk-widget-factory into a single system of constraints and solve it while resizing the window ? We will find out…

One of the reasons why we are moving to GL-based rendering is that we want to enable more pervasive animations in many places. One example that we’ve discussed is animating the showing and hiding of list or grid elements in a filtered list box or flow box. Doing this smoothly at 60 frames per second requires that we can move and transform elements without causing full relayouts, which in turn means that we to separate positions from sizes, which is only practical in a world without subwindows.

Therefore, one of the milestones on our journey towards GTK+ 4 is to move event handling away from using subwindows for routing input events to their target. Once we have taken this step, it will also be possible to take transformations into account.

Carlos just posted a branch that is taking the first steps in this direction.

The details: children, nodes and gadgets

I’ve already talked about Emeus and constraints, so I won’t repeat that here. But there are some other changes in the way GTK+ widgets work that are worth mentioning here.

In GTK+ 3.20 and afterwards, we introduced gadgets as internal construct that allowed us to clean up our widget’s adherence to the CSS box model. This was always meant as a stop-gap solution for pre-existing widgets that were just too complicated to fit the CSS box model well. Now that any widget can have children, we have begun to replace some of these gadgets with regular widgets.

For example, GtkSwitch now has three child widgets: the slider and two labels. 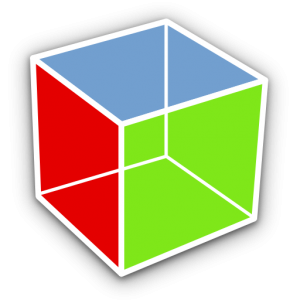 We’ve had a successful hackfest and GTK+ 4 development is on track, with 3.90 as a visible milestone. Try it out!

A flatpak is available here:

and can be installed with

Thanks to everybody who helped us to reach this point by contributing recipes, sending patches, translations or bug reports!

Recipes looks pretty good in GNOME Software already, but one thing is missing: No documentation costs us a perfect rating. Thankfully, Paul Cutler has shown up and started to fill this gap, so we can get the last icon turned blue with the next release. 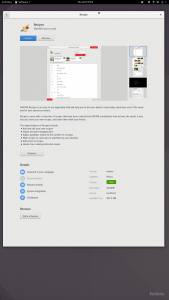 Since one of the goals of Recipes is to be an exemplaric Flatpak app, I took this opportunity to investigate how we can handle documentation for sandboxed applications.

One option is to just put all the docs on the web and launch a web browser, but that feels a bit like cheating. Another option is to export all the documentation files from the sandbox and launch the host help browser on it. But this would require us to recursively export an entire directory full of possibly malicious content – so far, we’ve been careful to only export individual, known files like the desktop file or the app icon. 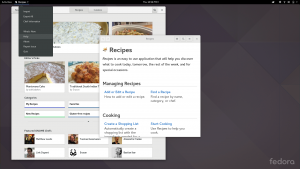 Therefore, we decided that we should instead ship a help browser in the GNOME runtime and launch it inside the sandbox. This turns out to work reasonably well, and will be used by more GNOME apps in the near future.

Apart from this ongoing work on documentation, a number of bug fixes and small improvements have found there way into the 1.0 release. For example, you can now find recipes by searching for the chef by name. And we ask for confirmation if you are about to close the window with unsaved changes.

Some of these changes were contributed by prospective Outreachy interns. 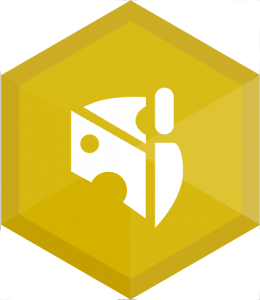 I have mentioned it before, you can find some information about our future plans for recipes here:

Your help is more than welcome!

This month, we will release GNOME 3.24, and alongside, GNOME recipes will have its 1.0 release. 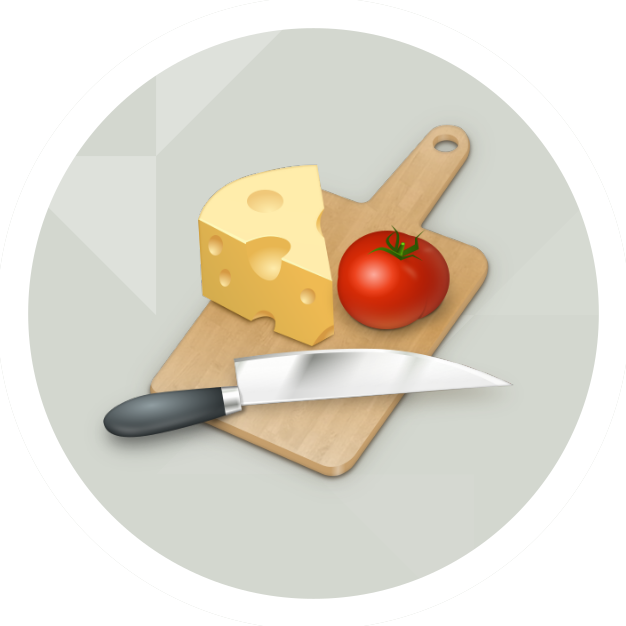 It has been quite a journey from just an idea at GUADEC last August to the application that we have now.

To the finish line

Since my last update, we have focused on completing our 1.0 goals. The last thing that we needed was to get enough contributed recipes to replace all the test data with actual content. And we’ve made it, thanks to the cooks in the GNOME community, we have plenty of great recipes now: 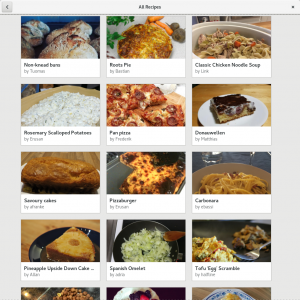 A few small features have still made their way in, despite the focus on polish. One thing I’ve played with is making appstream data useful inside the application itself, for showing ‘What’s New’ style information: 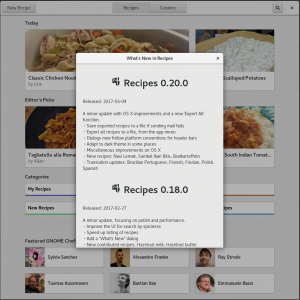 The timer support in cooking mode has seen quite a bit of improvement and polish.

I’ve also picked up my earlier experiment again, and built Recipes on OS X. This time, I got far enough to produce a dmg image: 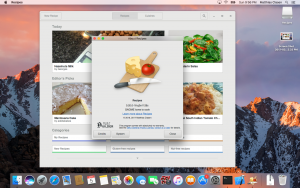 A useful by-product of this effort was a number of bug fixes for the GTK+ Quartz backend, such as working fullscreen and window functions.

1.0 will not be the end of the road for Recipes. There’s a number of exciting features on the post-1.0 roadmap.

For the next leg of the journey, we will welcome some Outreachy interns who will help us to add useful functionality, from unit conversion to shopping list export.