Since I’ve last written about recipes, we’ve started to figure out what we can achieve in time for GNOME 3.24, with an eye towards delivering a useful application. The result is this plan, which should be doable.

But: your help is needed. We need more recipe contributions from the GNOME community to have a well-populated initial experience. Everybody who contributes a recipe before 3.24 will get a little thank-you from us, so don’t delay… 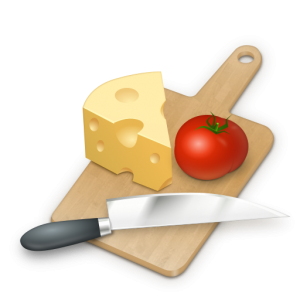 The 0.8.0 release that I’ve just created already contains the first steps of this plan. One thing we decided is that we don’t have the time and resources to make the ingredients view useful by March, so the Ingredients tab is gone for now. 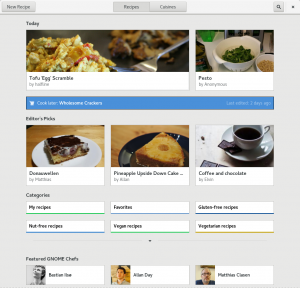 At the same time, there’s a new feature here, and that is the blue tile leading to the shopping list view: 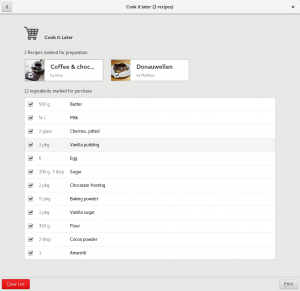 The design for this page is still a bit up in the air, so you should expect this to change in the next releases. I decided to merge it already anyway, since I am impatient, and this view already provides useful functionality. You can print the shopping list: 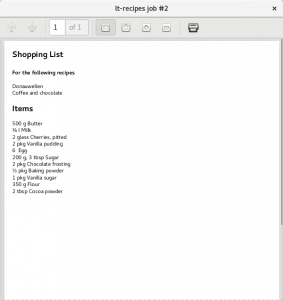 Beyond this, I’ve spent some time on polishing and fixing bugs. One thing that I’ve discovered to my embarrassment earlier this week is that exporting recipes from the flatpak did not actually work. I had only ever tested this with an un-sandboxed local build.

Sorry to everyone who tried to export their recipe and was left wondering why it didn’t work!

We’ve now fixed all the bugs that were involved here, both in recipes and in the file chooser portal and in the portal infrastructure itself, and exporting recipes works fine with the current flatpak, which, as always, you can install from here:

One related issue that became apparent during this bug hunt is that things work less than perfectly if the portals are not present on the host system. Until that becomes less likely, I’ve added a bit of code to make the failure less mysterious, and give you some idea how to fix it: 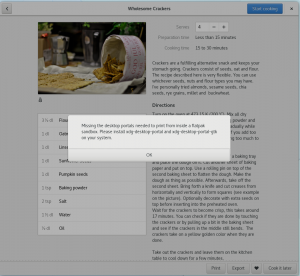 I think recipes is proving its value as  a test bed and early adopter for flatpak and portals. At this point, it is using the file chooser portal, the account information portal, the print portal, the notification portal, the session inhibit portal, and it would also use the sharing portal, if we had that already.

I shouldn’t close this post without mentioning that you will have a chance to hear a bit from Elvin about the genesis of this application in the Fosdem design devroom. See you there!

12 thoughts on “Recipes for you and me”