I had the opportunity to spend some time in Montreal last week to meet with some lovely font designers and typophiles around the ATypI conference. 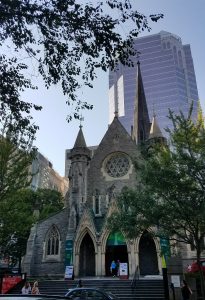 At the conference, variable fonts celebrated their first birthday. This is a new feature in OpenType 1.8 – but really, it is a very old feature, previously known under names like multiple master fonts.

The idea is simple: A single font file can provide not just the shapes for the glyphs of a single font family, but can also axes along which these shapes can be varied to generate multiple variations of the underlying design. An infinite number, really. Additionally, fonts may pick out certain variations and give them a name.

A lot has to happen to realize this simple idea. If you want to get a glimpse at what is going on behind the scenes, you can look at the OpenType spec.

A while ago, Behdad and I agreed that we want to have font variations available in the Linux text rendering stack. So we used the opportunity of meeting in Montreal to work on it. It is a little involved, since there are several layers of libraries that all need to know about these features before we can show anything: freetype, harfbuzz, cairo, fontconfig, pango, gtk.

freetype and harfbuzz are more or less ready with APIs like FT_Get_MM_Var or hb_font_set_variations that let us access and control the font variations. So we concentrated on the remaining pieces.

As the conference comes to a close today, it is time to present how far we got.

This video is showing a font with several axes in the Font Features example in gtk-demo. As you can see, the font changes in real time as the axes get modified in the UI. It is worth pointing out that the minimum, maximum and default values for the axes, as well as their names, are all provided by the font.

This video is showing the named variations (called Instances here) that are provided by the font. Selecting one of them makes the font change in real time and also updates the axis sliders below.

Eventually, it would be nice if this was available in the font chooser, so users can take advantage of it without having to wait for specific support in applications.

This video shows a quick prototype of how that could look. With all these new font features coming in, now may be a good time to have a hackfest around improving the font chooser.

One frustrating aspect of working on advanced font features is that it is just hard to know if the fonts you are using on your system have any of these fancy features, beyond just being a bag of glyphs. Therefore, I also spent a bit of time on making this information available in the font viewer. 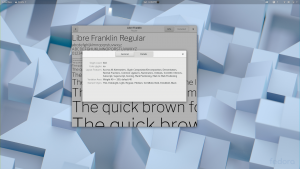 Our patches for cairo, fontconfig, pango, gtk and gnome-font-viewer are currently under review on various mailing lists, bugs and branches, but they should make their way into releases in due course, so that you can have more fun with fonts too!

2 thoughts on “Fun with fonts”