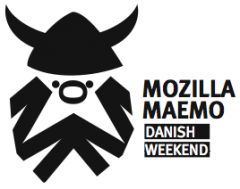 Haven’t seen much blogging about the Mozilla/Maemo Danish Weekend yet – here we go.

After meeting at the airport with Lauri Võsandi (who works on Bittorrent support in Canola as part of Google’s Summer of Code) and quickly getting a shower in the hotel, we went to the café of the IT University (the host of this event). Nice to see some familiar faces again plus those that you have only seen pictures of before. That evening I mostly had discussions about technology and politics (hey, there were also “real” Danish students around and not only Mozilla or Maemo hackers – there seems to be a life out there!).

Saturday was opened by Mozilla’s William and Nokia’s Quim in the one lecture room that we had. Many people though also spent their time in the large hall room (lovely architecture!) for sitting, hacking and discussing together. There were talks about Fennec (Mozilla’s browser for smaller devices), Canola, Fremantle Stars and Mer.
Coffee, tea, great sandwiches for lunch and sweets for the afternoon were provided (though the coffee was removed one hour before lunch – this decreased productivity for many people). ;-)
In the evening after picking up some All you can eat we met in a bar in the center to have some beers.

On Sunday we had about 25 quick lightning talks, sometimes just a few words explaining “I work on/I can help you with…” but very helpful. It was also a pleasure to talk to some Mozilla folks that were curious about how it is to deal with a big company that (slowly) moves to Open Source.
All in all, a very good and helpful weekend.

Work related on that weekend I introduced an “upstream” keyword in maemo.org Bugzilla (had that in mind for some time now), discussed the clutter blocker with Niels and Soumya, fixed some database sanity check issues, triaged lots of bugs, and started to concentrate more in triaging bugs & feature requests for Fremantle. So if you are subscribed/have voted for requests that interest you you might have received some “Fixed in Fremantle” bugmail but especially for feature requests I have often set the Version field to Fremantle which basically means “This is not fixed yet”.
Still thinking about how to deal with bug reports about API documentation (which is directly handled by the corresponding package developers and not by the Documentation folks) – I more and more tend to add a “docs” keyword and to keep those bugs in the corresponding (code) product instead of moving them to the “Developer Platform > Documentation” product so they remain visible for the developers. Comments?

Looking forward to the soon-to-come maemo.org Brainstorm for feature requests that deal with a broader scope.